Amazing in Motion. How That Lexus Hoverboard Actually Works. This week, Lexus introduced a short teaser video for SLIDE, a hoverboard that appears to not just live up to our Back to the Future II dreams but, at least stylistically, improve on them. 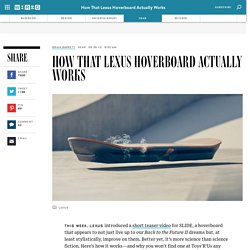 Better yet, it’s more science than science fiction. Here’s how it works—and why you won’t find one at Toys’R’Us any time soon. Let’s start with that teaser video, a scant 37 seconds of hoverboard hype that almost prompts more skepticism than excitement. A bamboo and carbon fiber skateboard, emitting wisps of smoke, levitates an inch or two off of what appears to be a concrete surface. A foot approaches as if to mount and ride—and then nothing.

The Lexus hoverboard really does live up to its name. That’s not a lot to put one’s faith in. Even the information Lexus did provide at the time didn’t jibe with what the teaser shows. “It’s a tease, right? Fortunately, the bad news stops there. How It Works Magnets. As for the wisps of smoke you see rising from the sides of the Lexus board? And yet! Ride This One-Wheeled Gyro Skate They Call A “Hoverboard” The mad scientist who started Hoverboard Technologies calls his vehicle an “earned experience.” 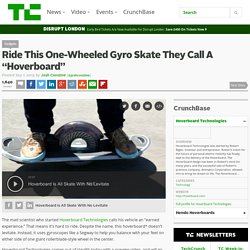 That means it’s hard to ride. Despite the name, this hoverboard* doesn’t levitate. Instead, it uses gyroscopes like a Segway to help you balance with your feet on either side of one giant rollerblade-style wheel in the center. Hoverboard Technologies comes out of stealth today with a preview video, and will go on Kickstarter September 17 for around $4,000, shipping next year. The hoverboard* is powered by an electric motor that follows your lean to accelerate or brake. [* = I’m going to call the device a hoverboard but to be clear, it does not hover like real mag-lev boards such as the Hendo Hoverboard].

I spent an hour trying to get the hang of this hoverboard* and by the end I could skittishly go in a straight line and just barely make soft turns without falling off. This is by far the toughest personal electric vehicle I’ve tried. That was never really the point, though. 'Hoverboard' is part Segway, part skateboard and reaches speeds of 16mph. Hoverboard uses a wheel that acts like a gyroscope to maintain balanceWheel can also be used to control direction and creates a 'floating feeling'The board has a range of 12 miles (19km) and reaches 16mph (26km/h)Prices are also expected to start at $4,000 (£2,620) when the board launches on Kickstarter on 17 September By Victoria Woollaston for MailOnline Published: 12:43 GMT, 2 September 2015 | Updated: 14:30 GMT, 2 September 2015 As predicted in Back To The Future , 2015 has been the year of the hoverboard with a plethora of devices being announced based on Marty McFly's iconic gadget. 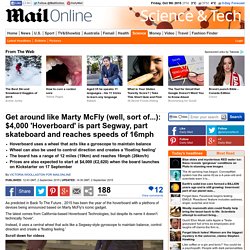 The latest comes from California-based Hoverboard Technologies, but despite its name it doesn't technically 'hover'. Instead, it uses a central wheel that acts like a Segway-style gyroscope to maintain balance, control direction and create a 'floating feeling.' Scroll down for videos It isn't available to buy yet, and Mr Bigler is gearing up to launch the board on Kickstarter on 17 September.

Loaded: 0% The Hoverboard Has Arrived: Flying Skateboard Company is Crowdfunding for 2015 Release. A skateboard that can fly has been developed, and the company behind it is crowdfunding for a 2015 launch date. 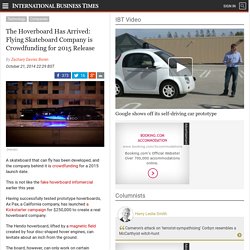 This is not like the fake hoverboard infomercial earlier this year. Having successfully tested prototype hoverboards, Ax Pax, a California company, has launched a Kickstarter campaign for $250,000 to create a real hoverboard company. The Hendo hoverboard, lifted by a magnetic field created by four disc-shaped hover engines, can levitate about an inch from the ground. The board, however, can only work on certain surfaces, such as metal floors that can support the magnetic field. The company behind the Hendo has earmarked almost half of the $250,000 its after for a Hover Engine factory in Los Gatos, Califonia.

The remaining $12,500 will be spent developing the world's first Hover park, where boarders can use their devices. So far, the company has raised $67,000 and the campaign has 54 days left. Lexus' New Hoverboard Is Cool, But Will It Fly? Last month, Japanese auto manufacturer Lexus unveiled its newest product, and it's not another luxury SUV. 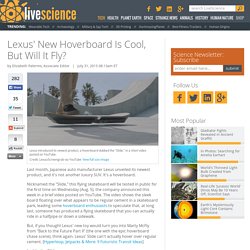 It's a hoverboard. Nicknamed the "Slide," this flying skateboard will be tested in public for the first time on Wednesday (Aug. 5), the company announced this week in a brief video posted on YouTube.