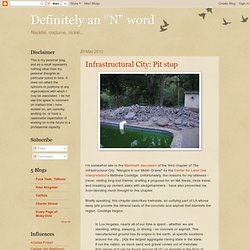 Unfortunately, the reasons for my lateness - travel, visiting long-lost friends, drafting a proposal for an MA thesis, more travel, and breaking up cement slabs with sledgehammers - have also prevented me from devoting much thought to this chapter. Red Light, Green Light : The Invention of the Traffic Signal. Lester Wire, with his two color traffic signal The traffic signal was first invented in 1912 — by a Detroit policeman named Lester Wire — as a two-color, red-and-green light with a buzzer to warn pedestrians ahead of the impending transition. 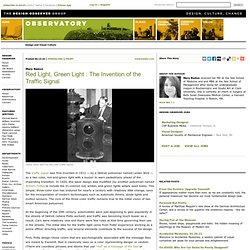 In 1920, this basic design was modified (by another policeman named William Potts) to include the tri-colored red, amber, and green lights widely used today. This simple, three-color icon has endured for nearly a century with relatively little change, save for the incorporation of modern technologies such as automatic timers, diode lights and motion sensors. Embodied and cybernetic… « Thoughts on Everything under the Sun or I am a guilty Secularist. Jam-hack is Mammoth’s post on “Blocking all Lanes-Traffic” the first chapter in the second section, Fabric, of the Kazys Varnelis edited The Infrastructural City. 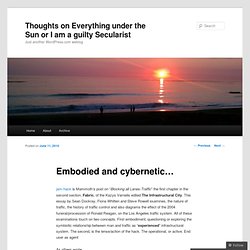 This essay by Sean Dockray, Fiona Whitten and Steve Rowell examines, the nature of traffic, the history of traffic control and also diagrams the effect of the 2004 funeral/procession of Ronald Reagan, on the Los Angeles traffic system. All of these examinations touch on two concepts. First embodiment, questioning or exploring the symbiotic relationship between man and traffic as “experienced” infrastructural system. Infrastructural City: Blocking all lanes. Being the rush hour, most drivers weren't looking where they were going, as they crawled their way toward Central London. 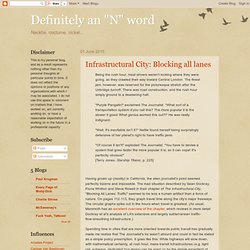 The finest jam, however, was reserved for the picturesque stretch after the Uxbridge turnoff. There was road construction, and the rush hour simply ground to a deadening halt. "Purple Pangalin! " exclaimed The Journalist. "What sort of a transportation system d'you call this? Having grown up (mostly) in California, the alien journalist's point seemed perfectly bizarre and impossible. Spending time in cities that are more oriented towards public transit has gradually made me realize that The Journalist's ire wasn't absurd and could in fact be stated as a simple policy prescription. Reading the infrastructural city: chapter five index. A quick editorial note: while my blogging may be sporadic in the coming weeks — though there’s a good and pretty exciting reason for that, who weighs approximately six pounds and thirteen ounces — Reading The Infrastructural City will continue more or less unabated and as scheduled, not counting the slight delay in the compilation of this set of links. 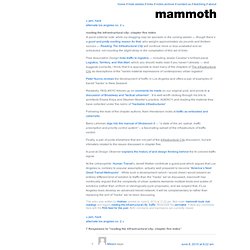 Free Association Design links traffic to logistics — including Jessie Cavalier’s brilliant piece Logistics, Territory, and Wal-Mart, which you should really read if you haven’t already — and suggests (correctly, I think) that it is appropriate to read many of the chapters of The Infrastructural City as descriptions of the “varied material expressions of contemporary urban logistics”. Future forests of the infrastructural city. This is week seven of our reading of The Infrastructural City; if you’re not familiar with the series, you can start here and catch up here. With our delayed posting of the previous chapter, we didn’t get around to posting an index, but you can read FASLANYC’s contrarian take on the chapter here and Peter Nunns’ look at telecoms, the future of air travel, and de-globalization here. 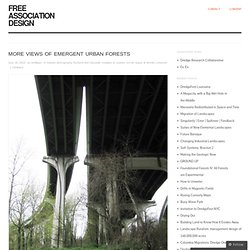 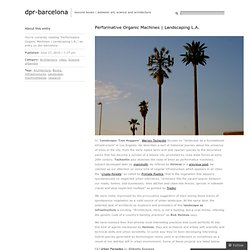 He describes a sort of historical journey about the presence of trees in the city, from the early native semi-arid and riparian species to the decorative palms that has become a symbol of a leisure city, promoted by reals state forces at early 20th century. Techentin also sketches the raise of trees as performative machines, subject developed later by mammoth. As refered by Holmes in a previous post, he catched up our attention on some kind of vegetal infrastructure which appears in all cities: the “crypto-forests” as called by Primate Poetics, that is the vegetation that appears spontaneously on neglected urban interstices. “Greenery fills the vacant spaces between our roads, homes, and businesses; lines ditches and chain-link fences; sprouts in sidewalk cracks and atop neglected rooftops” as pointed by Tredici [1] Urban Parasites by Gilberto Esparza To this:

Reading the infrastructural city: chapter seven index. [A "feral house" in Detroit, via Sweet Juniper, who has many more pictures; houses and porches, of course, cannot be mowed, and so one often finds early successional plants such as Ailanthus taking advantage of that fact while their brethren a few feet away are easily suppressed by even the most sporadic of maintenance regimes; you might also enjoy Sweet Juniper's flickr set "Life on the Urban Prairie"] 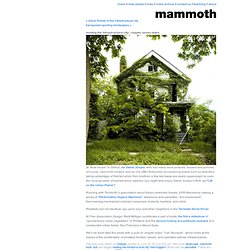 Invisible Infrastructure. Cell Structure: From Green to Brown. This post is a part of the Mammoth Book Club. 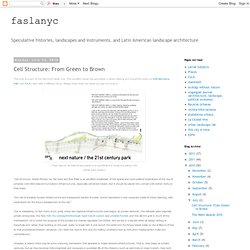 This excellent essay has generated a varied reading and thoughtful posts by DPR-Barcelona, Polis, and F.A.D., each with a different focus. Please check them out when you get the chance. ["next nature" by balmori associates is a superficial but intriguing glimps into cellular park design] "Cell Structure: Mobile Phones" by Ted Kane and Rick Miller is an excellent breakdown of the spatial and socio-political implications of the rise of privately controlled telecommunications infrastructures, especially cell phone towers.

What if bees had mobile phones? Hexagonal London. 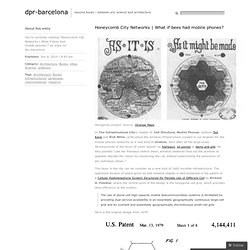 Source: Strange Maps. Reading the infrastructural city, chapter eight index. {*style:<i> [Image via flickr user Grahamko ] </i>*} Yes, we’ve fallen a bit behind with The Infrastructural City . But we’ve got a plan to remedy that — we’re pushing back the schedule. This is actually less because of our lag (this week was supposed to be an “off” week, so we’d be caught up with Stephen’s hybrid “Mobile Phones”-”Property” post this week and my post on “Distribution” next Monday), and more because we want to make sure that Roger Sherman’s “Count(ing) on Change” (the “Property” chapter) gets the full discussion it deserves.

Games and Spaces of Negotiation. [Counting on Change, by Roger Sherman -- Chapter 9 of The Infrastructural City Blogiscussion] [A learned coexistence: Curley's Cafe, Shell's Oil Rigs, and US bank together in Signal Hill, Los Angeles. Source] “Emphasize change-based thinking. Embrace risk. Understand successional dynamics and settle upon an equilibrium enforced by each [urban] player’s self interest. From Tianguis to Capitalized Urban Space in L.A. Public space in Los Angeles changes so rapidly, that urban plans for the city always arrive late. Roger Sherman emphasizes at Counting (on) Change, Property, chapter 9 of The Infrastructural City, that however if architecture is to recover its social, economic, and political value amidst the instability and uncontrollability of the contemporary city, it needs to be rethought in a manner that assumes risk, not averst it. An interesting approach to this topic is the study of informal economic networks that take place in areas that weren’t designed for this use.

Or areas with ephemeral and informal occupation, as flea markets, tianguis and swap meets. We can read at Cultural Landscapes: Reading the infrastructural city, chapter nine index. “what to do when there is nothing to do” ["Weather Field"; Lateral Office + Paisajes Emergentes for Land Art Generator Initiative] As we have nearly reached the conclusion of our collaborative reading of The Infrastructural City, we thought it would be interesting to discuss some of the lessons of the text with one of mammoth‘s favorite architectural studios, the Toronto-based Lateral Office.

In a series of emails, mammoth spoke with Lateral’s Lola Sheppard and Mason White about why the Economist is more essential reading for architects than Wallpaper, what an “expanded field” for architecture might look like, how to evaluate the performance of a speculative proposal, and, of course, The Infrastructural City. Readers of mammoth are likely also familiar with Lola and Mason as two of the founders of research-group-slash-blog InfraNet Lab; in addition to Lateral and InfraNet, Lola teaches at the University of Waterloo and Mason at the University of Toronto.

What is Traffic? The Infrastructural City Blogiscussion: Reading Sean Dockray, Fiona Whitton, and Steve Rowell’s Blocking All Lanes, (introduced by mammoth here) [Flickr user Zsolti/NYM] Blocking All Lanes begins by asking a very basic question — what is traffic? As the authors point out, we typically emphasize the vehicular steel container rather than its contents when referring to traffic. A Corporate Landscape Urbanism. “Hiding its presence from public view, the cell tower camouflaged as a palm tree becomes an appropriate icon for the private infrastructural network of our day” [image source]

And so it ends… « Thoughts on Everything under the Sun or I am a guilty Secularist. Product Placement and Cargo Cults. “…we have radical abundance propped up by massive debt. Instructions to keep “The Red Violin” in a virtual prop-house. “We cannot escape our property; we are tied to it forever, as part of its history of circulation. Reading the infrastructural city: chapter eleven index. [The Studio Zone, a 30-mile radius in Los Angeles which serves to determine the "rates and work rules for workers in the entertainment industry"; the majority of Los Angeles' prop houses are located within the Studio Zone; image via the California Film Commission]

Architects without architecture. From Dust Problems to Towing Icebergs « dpr-barcelo. The Lake Project. Reading the infrastructural city: proposal – mammoth // building. Infrascape Design. “the parrot, the weed, and the sludge mat” – mammoth // building. Wyoming is in los angeles – mammoth // building nothing out of s. “rising like alien plants on the terraformed lakebed” Problematic Surfaces and Collateral Urbanism: Reading Into the O.

Bonus Post!- Bring me the sunflower so that I might transplant i. Preserving the integrity of the void…. « Thoughts on Everything. A zone comprised of an invisible pattern of ownership and mainte. Ecologies of Injustice. Reading the infrastructural city: chapter four index – mammoth / Inhabiting Pits and Craters in Los Angeles.