Microsoft is Back, Twitter's Impact On Brains, Steve Jobs Fun Facts, Fundraising Mistakes, Youtube Changed The World, Instagram's Launch. This is Your Brain on Twitter — Backchannel. To demonstrate the power of tweets, Twitter’s ad researchers turned to neuroscience. 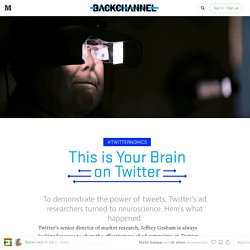 Here’s what happened. Twitter’s senior director of market research, Jeffrey Graham is always looking for ways to show the effectiveness of ad campaigns on Twitter — surveys, home visits, data models. One of the more interesting studies involved two groups of people watching the NCAA basketball tournament on television. One group was permitted to bring their phones and tweet all they wanted. The other had to leave their phones outside and somehow manage without a second screen. But Graham felt that Twitter could really make a mark using a technology he learned about in an advertising research association’s report.

There was one obstacle. “People wear a headset,” he says. So Graham’s team arranged a study at Twitter’s UK headquarters. Then, during 45-minute sessions, they alternated between normal Web-surfing activities and using Twitter — reading their timelines, tweeting, and other birdy stuff. Microsoft CEO Satya Nadella makes a big impression in just a year. Satya Nadella’s appointment as Microsoft CEO a year ago was surprising. 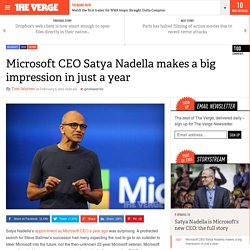 A protracted search for Steve Ballmer’s successor had many expecting the nod to go to an outsider to steer Microsoft into the future, not the then-unknown 22-year Microsoft veteran. Microsoft even attempted to massage any concerns by strategically announcing Bill Gates was "substantially increasing" his time at the company. How YouTube changed the world. Matthew Holehouse The 40-year old MP for Witney scrapes plates into a bin, while his wife helps their children get ready for school in their handsome kitchen. 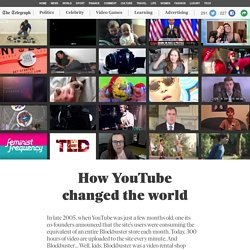 “Watch out BBC, ITV, Channel 4. We're the new competition. We're a bit wobbly, but this is one of the ways we want to communicate with people properly,” says David Cameron. It is October 2006 and WebCameron, a new YouTube channel, is born. Ten months earlier Cameron had won the Conservative leadership on a platform of reaching the voters others could not. In the eight years since, YouTube has become a raucous town square for those who aspire to power, good and evil. Obama’s 2012 re-election campaign included 30 staff working on YouTube Many politicians have attempted to ride the YouTube tiger. 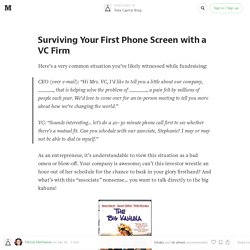 VC, I’d like to tell you a little about our company, ______, that is helping solve the problem of _______, a pain felt by millions of people each year. 10 Unusual Things I Didn’t Know About Steve Jobs Altucher Confidential. Posted by James Altucher I was standing right next to Steve Jobs in 1989 and it was the closest thing I ever felt to being gay. 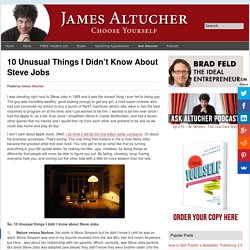 The guy was incredibly wealthy, good looking enough to get any girl, a nerd super-rockstar who had just convinced my school to buy a bunch of NeXT machines (which, btw, were in fact the best machines to program on at the time) and I just wanted to be him. I wanted to be him ever since I had the Apple II+ as a kid.

Ever since I shoplifted Ultima II, Castle Wolfenstein, and half a dozen other games that my friends and I would then rip from each other and pretend to be sick so we could stay home and play all day. I don’t care about Apple stock. So, 10 Unusual things I didn’t know about Steve Jobs. 1) Nature versus Nurture. 2) His father’s name is Abdulfattah Jandali. 3) He made the game “Breakout”. 4) He denied paternity on his first child, claiming he was sterile. Fundraising Mistakes Founders Make.

There’s a lot written about what you should do when you raise money, but there hasn’t been as much written about the common mistakes founders make. 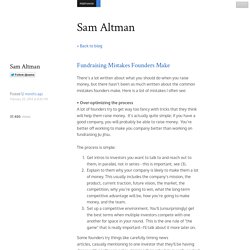 Here is a list of mistakes I often see: • Over-optimizing the process A lot of founders try to get way too fancy with tricks that they think will help them raise money. It’s actually quite simple; if you have a good company, you will probably be able to raise money. You’re better off working to make you company better than working on fundraising jiu jitsu. The process is simple: Get intros to investors you want to talk to and reach out to them, in parallel, not in series - this is important, see (3).Explain to them why your company is likely to make them a lot of money.

Many little things simply don't matter very much--for example, the "signal" sent when an early investor chooses not to participate in a later round. Unless you do it perfectly, game-playing will hurt you with most good investors. . • Over-optimizing the terms. Welcome to Instagram. We’re really excited to launch our first version of Instagram today, free in the App Store. 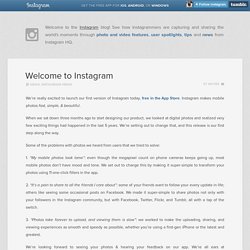 Instagram makes mobile photos fast, simple, & beautiful. When we sat down three months ago to start designing our product, we looked at digital photos and realized very few exciting things had happened in the last 5 years. We’re setting out to change that, and this release is our first step along the way. Some of the problems with photos we heard from users that we tried to solve: 1.