Homan Square revealed: how Chicago police 'disappeared' 7,000 people. Police “disappeared” more than 7,000 people at an off-the-books interrogation warehouse in Chicago, nearly twice as many detentions as previously disclosed, the Guardian can now reveal. 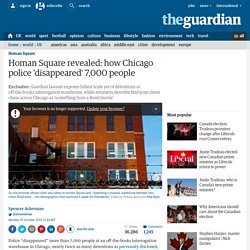 From August 2004 to June 2015, nearly 6,000 of those held at the facility were black, which represents more than twice the proportion of the city’s population. But only 68 of those held were allowed access to attorneys or a public notice of their whereabouts, internal police records show. The new disclosures, the result of an ongoing Guardian transparency lawsuit and investigation, provide the most detailed, full-scale portrait yet of the truth about Homan Square, a secretive facility that Chicago police have described as little more than a low-level narcotics crime outpost where the mayor has said police “follow all the rules”. 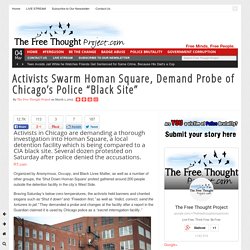 During Saturday’s demonstration, organizers called on people to come forward if their rights have ever been violated by police. “We need you to come forth and tell us yes you have been a victim of abuse,” one organizer said, according to USA Today. Homan Square protesters demand answers over Chicago police 'black site' More than 100 activists and community leaders rallied in Chicago on Saturday to call for official investigations into and even a shutdown of Homan Square, the police facility at the centre of allegations over unconstitutional abuse and a growing protest movement known as #Gitmo2Chicago. 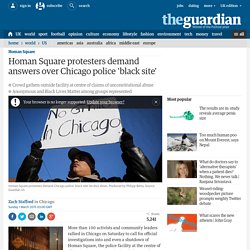 Less than a week after a Guardian investigation uncovered detailed accounts from Chicago citizens who said they were abused and detained without access to legal counsel or basic rights, demonstrators from groups including the hacktivist collective Anonymous and the Black Lives Matter movement chanted “freedom first” and pushed for open access to the secretive police warehouse. The diverse crowd pressed most directly for answers from Rahm Emanuel, the Chicago mayor who is facing a runoff election in an extended campaign in which police reform has featured prominently. Nation Reacts as Chicago Police's Secret Prison Confirms Fears Over NDAA. Cassius Methyl & Nick Bernabe February 26, 2015 (ANTIMEDIA) CHICAGO, IL — Is this the calm before the storm? 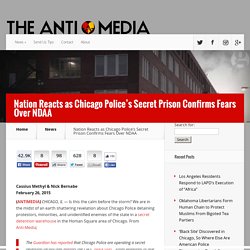 We are in the midst of an earth shattering revelation about Chicago Police detaining protestors, minorities, and unidentified enemies of the state in a secret detention warehouse in the Homan Square area of Chicago. From Anti-Media; The Guardian has reported that Chicago Police are operating a secret detention facility that mirrors the CIA’s “black sites.” Chicago Police Use Local News Media to Downplay Secret Torture Site. Justin King February 25, 2015 (ANTIMEDIA) CHICAGO, IL – Amid controversy over the Chicago Police Department’s off the books interrogation site, the Chicago Sun-Times ran a piece fully exonerating the police department, by basing the article entirely off statements made by the police department. 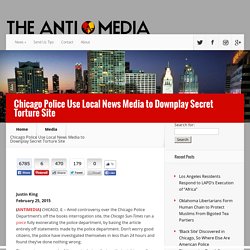 Don’t worry good citizens, the police have investigated themselves in less than 24 hours and found they’ve done nothing wrong. Lawyers: Homan Square Allegations Are A Citywide Problem. Homan Square Chicago, IL- Allegations of physical abuse and denial of Constitutional rights of suspects held at the closely guarded Homan Square warehouse in Chicago have led to lawyers claiming that such accusations are not limited to one particular facility and it is a problem spread throughout the city. 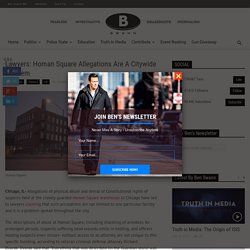 The descriptions of abuse at Homan Square, including shackling of arrestees for prolonged periods, suspects suffering head wounds while in holding, and officers holding suspects-even minors- without access to an attorney are not unique to this specific building, according to veteran criminal defense attorney Richard Dvorak. Dvorak said that “Everything that was described [in the Guardian story] was something that happens every day. Homan Square Black Site Allegation: Cops Used Heroin to Force Confessions. Chicago, Ill. – New allegations have surfaced involving the alleged black site at Homan Square. 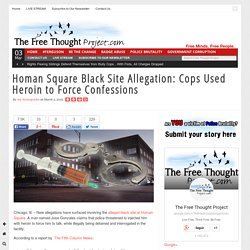 A man named Jose Gonzales claims that police threatened to injected him with heroin to force him to talk, while illegally being detained and interrogated in the facility. According to a report by The Fifth Column News: It began the way most of the incidents involving Homan Square do. Prison torture kill us. Opposite of what CPD does. Held for hours at secret Chicago 'black site': 'You're a hostage. It's kidnap... A woman who says she was shackled to a bench within Chicago’s secretive interrogation facility for 18 hours before being permitted access to a lawyer described the ordeal as being “held hostage’’ in the police compound that has been likened to a CIA black site. 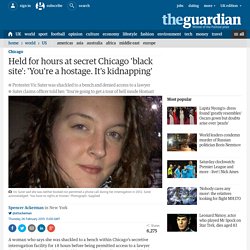 Vic Suter, a protester arrested before the 2012 Nato summit in Chicago, has told the Guardian about her experience of being detained inside Homan Square, a warehouse where multiple detainees allege they have been unable to contact legal counsel. Suter described a situation in which she was neither booked nor permitted a phone call – in defiance both of Chicago police procedures and a statement by police on Tuesday attempting to deny the Guardian’s reporting.

Suter’s account echoes that of Brian Jacob Church, whose story of extended detention without public notification and delayed legal access was featured in a Guardian’s exposé on Tuesday. “You are just kind of held hostage. When this became this. Activist to Attempt Shut Down of Secret Detention Center Operated by Chicago ... We were right again. They Disappeared Us: Chicago Police Black Site. By Jordan "The Slavic Libertarian" Marinovich “It’s one thing to quell demonstration and protests, but it’s another thing to use antiquated Gestapo tactics that are more commonly found in parts of the underdeveloped world or in places like China or Russia.” 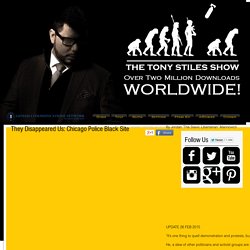 Those were the words of Cook County commissioner Richard Boykin after hearing about the Homan “black site” detention center run by the Chicago Police Department. He, a slew of other politicians and activist groups are calling for a federal investigation into the facility and its tactics. “I hadn’t heard of the sort of CIA or Gestapo tactics that were mentioned in the Guardian article until it was brought to my attention.

And we are calling for the Department of Justice to open an investigation into these allegations,” Boykin continued, speaking to reporters outside the Homan facility. Disappear for the weekend. The Chicago police used appalling military interrogation tactics for decades ... The Chicago police department has promised for more than a century to eliminate torture from its interrogation rooms. 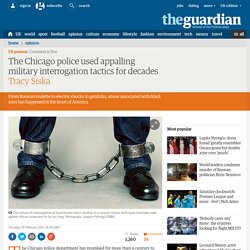 For more than a century, the Chicago police department has failed to deliver on that promise. The latest shameful episode is the tale of Richard Zuley, a police officer who brought the tactics he learned in Chicago to Guantánamo Bay and back again, as reported by The Guardian. “Say ‘Lawyer’ All You Want Motherf****r” Detainees from Chicago’s Police “Bla...

Chicago, IL — It was discovered this week that the Chicago Police Department has been operating a secret “black site” facility on the city’s west side. Inside a warehouse, Homan Square has long been the home to secretive police work. Attorneys as well as protesters, tell a tale of being systematically being denied their constitutional rights while being held. In an eye-opening report, the Guardian blew the top right off of Pandora’s box, leaving the CPD and their media spin factory backpedaling. This wouldn't've happened. 4 More Victims Come Forward From Chicago Secret Prison, Man Tortured Over Weed. Cassius MethylFebruary 27, 2015 (ANTIMEDIA) Chicago, IL — Four more victims of incarceration at Chicago’s Guantanamo Bay style secret detention/torture center, known as Homan Square, have come out and spoken to The Guardian about their experience being essentially treated like cattle.

They are four black males, Brock Terry, Kory Wright, Deandre Hutcherson and David Smith. Will We Allow the Chicago Police to Get Away With This? Nick Bernabe February 27, 2015 (ANTIMEDIA) Chicago, IL — I guess that’s the biggest question so far in 2015: will we allow the Chicago Police Department get away with making people disappear without due process? Will a new standard be set in America where the basic protections (or what’s left of them) promised to us by the Bill Of Rights are completely gone? I case you don’t know what I’m talking about, The Guardian reported on Tuesday that Chicago PD is literally snatching people off the streets, torturing and interrogating them, even killing at least one person, in a secret facility that is completely illegal. This horrible place is called Homan Square. Suspicions are running rampant that this facility is not alone.