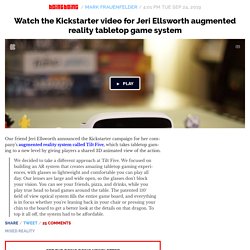 We decided to take a different approach at Tilt Five. Runewars. Forbidden Stars. Description from the publisher: The shifting Warp Storms that surround the long lost Herakon Cluster have finally abated, leaving the ancient treasures and planets within this sector open to the rest of the galaxy. 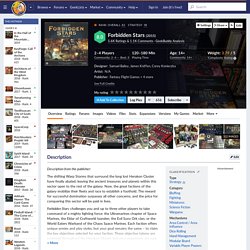 Now, the great factions of the galaxy mobilize their fleets and race to establish a foothold. The reward for successful domination surpasses all other concerns, and the price for conquering this sector will be paid in lives. Forbidden Stars challenges you and up to three other players to take command of a mighty fighting force: the Ultramarines chapter of Space Marines, the Eldar of Craftworld Iyanden, the Evil Sunz Ork clan, or the World Eaters Warband of the Chaos Space Marines. Each faction offers unique armies and play styles, but your goal remains the same – to claim the key objectives selected for your faction. Gameplay: Spartacus: A Game of Blood & Treachery. In Spartacus: A Game of Blood & Treachery, an exciting game of twisted schemes and bloody combats inspired by the hit STARZ Original series, each player takes on the role of Dominus, head of a rising house in the ancient Roman city of Capua. 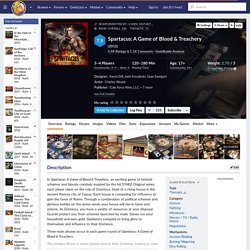 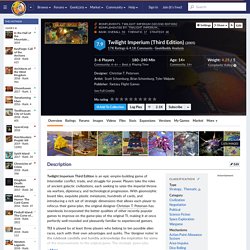 TI3 contains new oversize board tiles, more than 400 cards, every known civilization of the Twilight Imperium universe, almost every expansion rule and component ever published for TI, a gorgeous graphical overhaul, and an impressive full-color rules set. The Resistance. The Empire must fall. 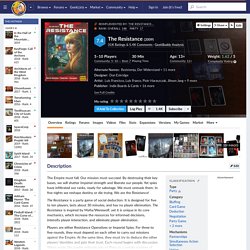 Our mission must succeed. By destroying their key bases, we will shatter Imperial strength and liberate our people. Yet spies have infiltrated our ranks, ready for sabotage. We must unmask them. In five nights we reshape destiny or die trying. The Resistance is a party game of social deduction. Players are either Resistance Operatives or Imperial Spies. Sheriff of Nottingham. Arkwright. Kanban: Driver's Edition. "Kanban" — or 看板, the Japanese word for billboard — is a term for the visual cues that might be used in a lean, efficient assembly line in order to expedite and smooth workflow.

Monikers. Fiasco. My new favorite card game. Amazon. Terra Mystica. The Resistance: Avalon. The 'Rick And Morty: Anatomy Park' board game will soon be yours. Can't stand to wait another two weeks for the release of Rick and Morty season 3? 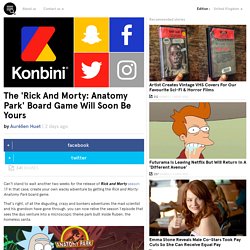 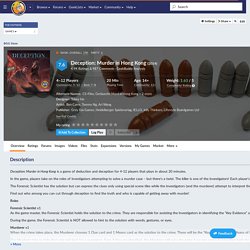 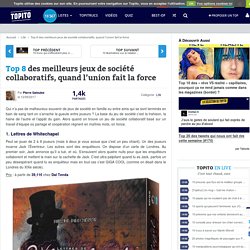 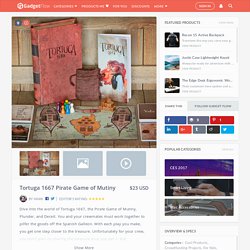 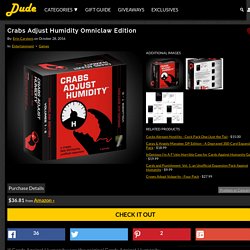 Sorry, unofficial expansion. At least they're the first I remember seeing. And have been around long enough that they themselves have added 4 more expansions to their expansion. Punderdome: A Card Game for Pun Lovers. All puns, all night long at your next bro night? No, dudes, I'm not playing games with your heart. I'm playing games with this deck of Punderdome cards. Amazon. Amazon. Advance Wars: The Board Game! Code:Deck – Un jeu de cartes pour réviser les langages de programmation. 2D Portable Chess Set. Rawstudio Travel Chess Set. Checkmate! Shot Glass Chess. How it Works After you purchase a vanity number, we will contact you within 1-2 business days with all the information you need to provide to your carrier to transfer your number. You should be able to use your new number within 1-3 days of contacting your carrier.

The number is yours to keep. If you decide to change carriers or phones at any point, you can continue to use your vanity number. Compatibility All numbers are compatible with the following US Wireless Carriers: AT&T, Spring, T-Mobile, and Verizon Wireless. 'X' Numbers. 26 Board Games You Have To Play Before You Die. 13 Board Games That Are Actually Fun For Adults. World of Yo-Ho. Man Bites Dog: Toys & Games. 19 Board Games Adults Will Actually Want To Play. Cones Of Dunshire Board Game.

This edition includes additional components, which enhances game play. The game board represents a portion of the Kingdom of France in the Middle Ages. Kremlin. A game of political intrigue set in the Soviet Politburo. The game consists of a large number of politician cards, some of which form the first politburo. BattleLore de Richard Borg.