Finding Allies: My Story as a Woman of Color in Tech. After seven years in the tech industry, I decided to chase my once-abandoned dream of becoming a software engineer. 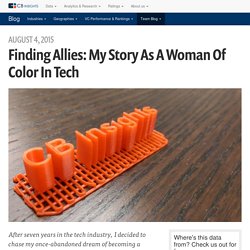 Here are my early observations. Written by Nicolle Quintero (@developerchica), software engineer at CB Insights. “It’s going to be tough,” they said. “Good luck with that,” they wished me. After seven years in the tech industry, I had decided to chase my once-abandoned dream of becoming a software engineer. I had relatively little day-to-day exposure to the gender gap in my advertising sales role.

Twelve years earlier I walked into my first computer science class at Yale College and promptly turned right around. Since that day I have been inspired by organizations that teach girls to code. My hope was that I’d have the resilience and courage now that I couldn’t quite muster up back in college. I read article after article about tech’s four-letter word: diversity. The three most underrepresented groups? WomenBlacksLatinos Well damn, check, check and check.

And then it happened. Gmail's 'Undo Send' feature finally graduates out of labs after six years. 3 Best Tools for Automating Your Life at Work. The tech team, a.k.a., the people who are always one step ahead of you when it comes to new apps, sites, and extensions. 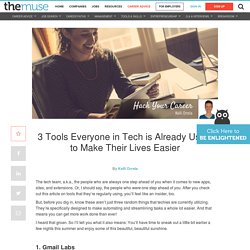 Or, I should say, the people who were one step ahead of you. After you check out this article on tools that they’re regularly using, you’ll feel like an insider, too. But, before you dig in, know these aren’t just three random things that techies are currently utilizing. They’re specifically designed to make automating and streamlining tasks a whole lot easier. And that means you can get more work done than ever! I heard that groan. 1.

You can now score a free Android app every week from Google Play. Google has quietly launched a Free App of the Week program in the Google Play store, giving Android users a little something to look forward to every seven days. 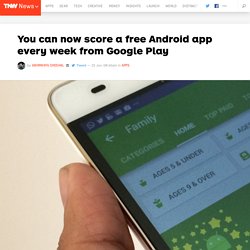 The first offering of the lot is Daniel Tiger Grr-ific Feelings, a $3 educational app from PBS with a set of games and activities for kids aged two to five. It’s buried in the Google Play’s Family section, and you’ll need to navigate there to get the offer or click here to get the app for free. Google previously hasn’t had a mechanism to offer paid apps for free — once a developer lists their paid app as free, they can’t change it back and charge money for it again. The new deal uses an automatically applied discount code that brings the app’s cost down to zero. It’s not yet clear how developers can opt into the program. . ➤ Google Play Offers Its First Free App Of The Week—A PBS App Tucked Away In The Family Section [Android Police]

Let it code! Disney's 'Frozen' teams with Code.org to inspire young programmers. There are a lot of coding tutorials out there. 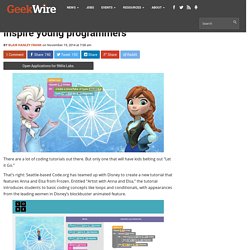 But only one that will have kids belting out “Let it Go.” That’s right: Seattle-based Code.org has teamed up with Disney to create a new tutorial that features Anna and Elsa from Frozen. Entitled “Artist with Anna and Elsa,” the tutorial introduces students to basic coding concepts like loops and conditionals, with appearances from the leading women in Disney’s blockbuster animated feature. In addition, the tutorial will be backed by short video lectures from women in the tech industry, like Polyvore CEO Jess Lee and Microsoft engineer Paola Mejia. Anybody can learn.

EdX To Offer Free Advanced Placement Courses For High Schoolers. EdX is a non-profit website that offers over 300 massive online open courses (MOOCs), providing access to a world-class education to anyone with an internet connection at little or no cost. 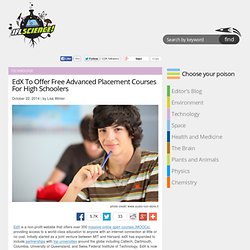 Initially started as a joint venture between MIT and Harvard, edX has expanded to include partnerships with top universities around the globe including Caltech, Dartmouth, Columbia, University of Queensland, and Swiss Federal Institute of Technology. EdX is now embarking on courses for teenagers by offering high school-level options, including Advanced Placement (AP) courses.

The AP program was developed by the College Board, the same organization behind the SAT. The 34 AP courses that are offered at schools are desirable because they provide a more challenging curriculum to exceptional high school students, on par with the information found in introductory-level college classes. Design and Code Workshop for Beginners. Interested in learning the basics of good design? 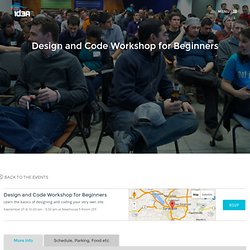 Interested in learning to code? Come to the Design and Code Workshop for Beginners brought to you by AIGA, Girls in Tech, and IDEA! In this hands-on workshop, you’ll learn the basics of designing and coding your very own site. Dee Cater sur Twitter : "Learning about adult literacy issues via @ProLitWorld. We're gonna use #tech to help! #ProLitHack #StartUNY. Deecater : Just got 3D printer trained... Blog. Blog. Blog. Blog.