Board Game. You are head of a family in an Italian city-state, a city run by a weak and corrupt court. 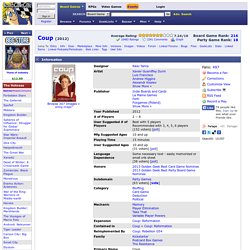 You need to manipulate, bluff and bribe your way to power. Your object is to destroy the influence of all the other families, forcing them into exile. Only one family will survive... In Coup, you want to be the last player with influence in the game, with influence being represented by face-down character cards in your playing area. Each player starts the game with two coins and two influence – i.e., two face-down character cards; the fifteen card deck consists of three copies of five different characters, each with a unique set of powers: Duke: Take three coins from the treasury.

On your turn, you can take any of the actions listed above, regardless of which characters you actually have in front of you, or you can take one of three other actions: Income: Take one coin from the treasury. The last player to still have influence – that is, a face-down character – wins the game! Lords of Waterdeep. Game description from the publisher: Waterdeep, the City of Splendors – the most resplendent jewel in the Forgotten Realms, and a den of political intrigue and shady back-alley dealings. 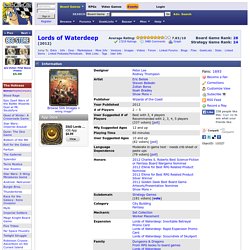 In this game, the players are powerful lords vying for control of this great city. Its treasures and resources are ripe for the taking, and that which cannot be gained through trickery and negotiation must be taken by force! In Lords of Waterdeep, a strategy board game for 2-5 players, you take on the role of one of the masked Lords of Waterdeep, secret rulers of the city. Through your agents, you recruit adventurers to go on quests on your behalf, earning rewards and increasing your influence over the city. During the course of play, you may gain points or resources through completing quests, constructing buildings, playing intrigue cards or having other players utilize the buildings you have constructed.

Roll for the Galaxy. Repos Production - Description. A game of 7 Wonders is divided in 3 ages. 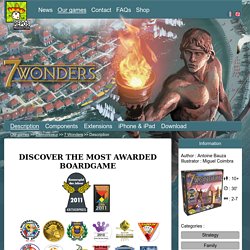 These ages are plaid similarly, each player is given the oppotunity to play 6 cards to developp his city and build his wonder. To play a card, you select one from a hand of cards and you lay it in front of you. Then, you give the remaining cards to the next player and you receive cards from the former player. At the end of each age, each player compares his military strength with the one of their neighoburing cities, players to his right and his left. When the third age is over, players score the points given by their cards and the military conflicts. Race for the Galaxy. Race for the Galaxy's development began when Thomas Lehmann, at Alea's request, started work on a card game version of Puerto Rico in parallel with Andreas Seyfarth's own. 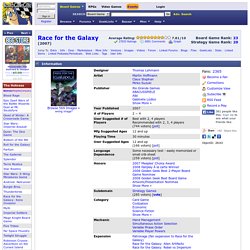 Their independent efforts resulted in some degree of collaboration, and though some of Mr. Lehmann's design ideas did make it into what eventually became San Juan, he continued to develop his concepts, taking the theme and other elements from an unpublished customizable card game he had previously designed. Race for the Galaxy benefits from an unusually thorough development process, involving thousands of test games and the deliberate design of an unusually coherent iconography (by onigame and the graphics designer, Mirko Suzuki) as well as a unique approach to player interaction that prevents direct conflict and encourages "parasitic conflict". Expansions Four expansions have been published, adding new cards, game features, start worlds, as well as supporting up to 6 players and solo play.

Spin offs Online Play Awards : Small World, the fun, zany, light-hearted civilization boardgame from Days of Wonder. Designed by Philippe Keyaerts as a fantasy follow-up to his award-winning Vinci™, Small World is inhabited by a zany cast of characters such as dwarves, wizards, amazons, giants, orcs and even humans; who use their troops to occupy territory and conquer adjacent lands in order to push the other races off the face of the earth. 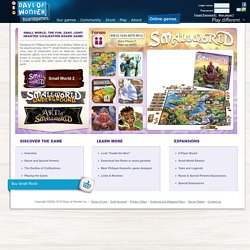