Up to the minute on Twitter. Wildfires threaten Methow's long road to recovery. This article originally appeared in the Aug. 3, 2015 issue of High Country News. 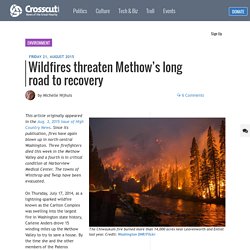 Since its publication, fires have again blown up in north-central Washington. Three firefighters died this week in the Methow Valley and a fourth is in critical condition at Harborview Medical Center. The towns of Winthrop and Twisp have been evacuated. On Thursday, July 17, 2014, as a lightning-sparked wildfire known as the Carlton Complex was swelling into the largest fire in Washington state history, Carlene Anders drove 15 winding miles up the Methow Valley to try to save a house. By the time she and the other members of the Pateros Volunteer Fire Department arrived, the fire was roaring through trees and shrubs on both sides of the valley. Anders, who was one of the first two female smokejumpers in the state of Washington, has been fighting fires in and around the Methow Valley for almost 30 years.

Lawmakers must focus on wildfire prevention. As Washington burns, Congress and the state Legislature must shift their thinking on firefighting funds and methods. 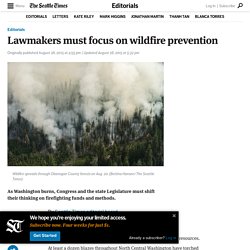 THIS month, Washington residents are witnessing the wrenching consequences of dry conditions and woefully limited firefighting resources. At least a dozen blazes throughout North Central Washington have torched several hundred thousand acres, destroyed hundreds of homes, and endangered many lives. The breathtaking destruction might have been less had Congress and the Washington Legislature acted sooner to implement newer thinking and better practices for wildland firefighting. Both governing bodies must shift their approaches. On Thursday, U.S. Cantwell and Barrasso must convince their colleagues to enact several policy changes in the next Wildfire Management Act, including: • Reforming the federal budget by ending the common practice of raiding or borrowing from other U.S. Legislature takes heat for squeezed fire budgets. Budget constraints on the state and federal level are hampering efforts to fight and prevent wildfires, some officials say. 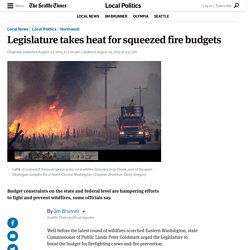 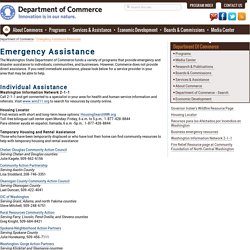 However, Commerce does not provide direct assistance. If you need immediate assistance, please look below for a service provider in your area that may be able to help. Individual Assistance Washington Information Network 2-1-1 Call 2-1-1 and get connected to a specialist in your area for health and human service information and referrals. Housing Locator Toll-free bilingual call center open Monday-Friday, 6 a.m. to 5 p.m.: 1-877-428-8844 Para obtener ayuda en español, llamada, 6 a.m -5p.m.: 1-877-428-8844 Temporary Housing and Rental Assistance Those who have been temporarily displaced or who have lost their home can find community resources to help with temporary housing and rental assistance: Chelan-Douglas Community Action Council Serving Chelan and Douglas countiesJulie Kagele, 509-662-6156. United Way of Chelan and Douglas County Disaster Relief. United Way of Chelan and Douglas County Disaster Relief Photos courtesy AP photographers Ted S. 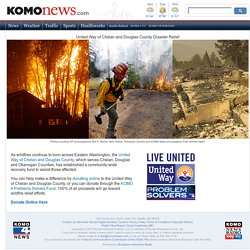 Donate Online Here. Supporting victims of the Washington wildfires. A sign outside the Chelan County Fire House honors three firefighters who were killed near Twisp. 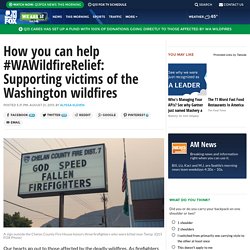 (Q13 FOX Photo) Our hearts go out to those affected by the deadly wildfires. As firefighters put their lives on the line you can help, too. Wildfire Relief Fund Q13 Cares, along with its partners the Seattle Seahawks, Albertsons and Safeway, will be collecting cash donations for those affected by the Washington wildfires. All donations will go to support the relief and recovery of those affected by wildfires across our area. As of Aug. 28, you’ve donated $96,000 to the relief fund. Q13 FOX will continue to share the latest on how you can help using the hashtag #WAWildfireRelief. Cover Photo Credit.