How to Make Caramel Apple Shots 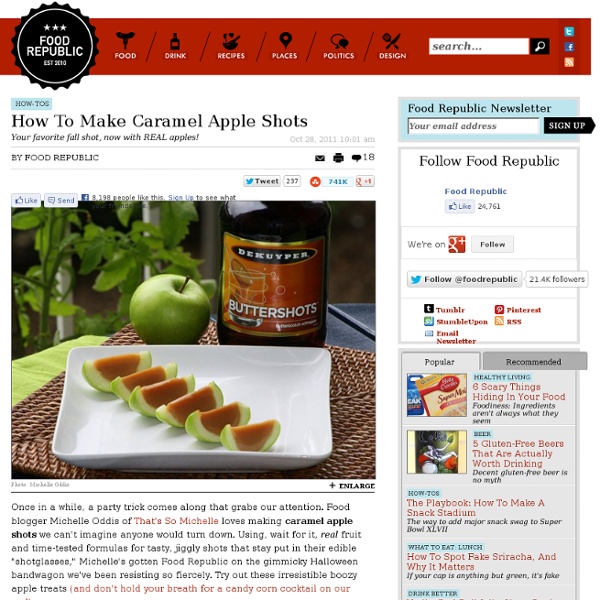 Photo: Michelle Oddis Once in a while, a party trick comes along that grabs our attention. Food blogger Michelle Oddis of That's So Michelle loves making caramel apple shots we can't imagine anyone would turn down. Using, wait for it, real fruit and time-tested formulas for tasty, jiggly shots that stay put in their edible "shotglasses," Michelle's gotten Food Republic on the gimmicky Halloween bandwagon we've been resisting so fiercely. Try out these irresistible boozy apple treats (and don't hold your breath for a candy corn cocktail on our end). Here's what you'll need: 10 small granny smith apples 1 envelope knox gelatin 1/2 cup water 1/2 cup coconut milk 2 drops yellow food coloring 1 envelope Land 'o Lakes caramel hot chocolate (regular would do just fine if you can't find caramel) 1/4 cup sugar 1/2 cup butterscotch schnapps lemon juice Halve and hollow out apples, cutting them from the stem down using a melon baller or spoon. Cut halves in quarters and those quarters in half again.

The Visual Miscellaneum One of the best perks of blogging here is all the free stuff people send me. Like, today, for instance, I opened my mail and found one of the more attractive books I've ever laid eyes on. It's by David McCandless and it's called The Visual Miscellaneum, a Colorful Guide to the World's Most Consequential Trivia. (Right up our alley, eh?) McCandless is a London-based writer and graphic designer who thinks the best way to absorb information is by mapping facts in colorful and cool/quirky ways. So you've got things here like a consensus cloud called Books Everyone Should Read (happy to see Catch-22 is the largest/darkest in the cloud), and a "Better Than Bacon" chart, which shows the faces of a series of actors who are way better connectors for the game SDoKB than Bacon himself.

S'moretini Shooters Me again. Here to convince you that you need yet another trendy, insanely-flavored bottle of booze. I do what I can. I know what you’re thinking. “Does marshmallow vodka really taste that different from that whipped cream vodka you already insisted that I buy? Grown Up Hot Chocolate with Homemade Bailey's Marshmallows Hi. I’m dying to tell you about this boozy hot cocoa, but I drank my way down a few mugs and am currently trying to crawl my way out. Like everything else this week, it wasn’t my idea… a bunch of you [like Allison] looked at me [virtually] as if I was insane for not putting the marshmallow vodka in hot chocolate. I’m so glad I have smart invisible internet friends! No more words.

Naan Owning a dairy goat means having a lot of dairy products on hand at all times. A while back, I got a little carried away and made a gallon and a half of homemade yogurt at one time. We’ve been eating it every day in various different forms: with berry sauce, on cereal, as fruity frozen yogurt, and in my secret pancake recipe. Naan, a traditional Indian flatbread, is one more way to use up extra yogurt. Naan is great for sopping up saucy Indian dishes, but I’ve been using it in a more locavore-fusion context. How to Crochet 5: Seaming Your Work In this how-to series we could move right on from single crochet to the other stitches (double crochet, half double crochet and triple crochet) but I'm pausing to talk about "seaming" because if you want to make anything other than washcloths or rectangular scarves or afghans (which are all good) you're going to need to seam some pieces together. Seaming is a good skill to have and it can be the difference between a cute sweater looking handmade instead of homemade. I am going to share two different methods. The first is the invisible mattress stitch, which works equally well for knitting or crochet by the way, and the second seaming method uses a single crochet stitch. Click to view the full tutorial. SEAMING WITH THE MATTRESS STITCH: You will need a tapestry needle to do the seaming, which is a large blunt needle and a big eye for threading the yarn.

Watermelons: Nature's Keg Still pumping your watermelons full of rum? What is this, summer camp? It’s time to grow up and start converting your watermelons into kegs. 10 cocktails for nurses Image: © Veer Incorporated Throwing a party for your coworkers or just need a laugh after a long shift? Try our favorite nurse-themed cocktails! Please enjoy responsibly.

Make-Ahead Frozen Margaritas - blended, frozen in mason jars, ready to serve It's hard to beat a margarita on a hot day. This recipe is a favorite that I've been making for many, many years. Like somewhere around 30 years. King-Man and I often enjoy these margaritas on a hot summer night or when we have friends over. The only problem is that you have to make a whole blender full at one time. Buffalo Chicken Dip This Chicken Buffalo Dip will please any crowd! Ingredients: 3 Chicken Breast, cooked and cut into bite sized piecesMoore’s Buffalo Wing Sauce (1 jar)2 (8 oz) packages cream cheese, softenedMarie’s Ranch or Blue Cheese Dressing (located in the refrigerated section)1 1/2 C shredded Mozzarella Cheese1 Bag of your favorite chips or Celery Sticks

Apache Tears Beautifully textured, captivating and fascinating! I’m referring to the strikingly mesmerizing Apache Tears crochet pattern. I’ve had quite a few enquiries in regards to this pattern, so today I thought I’d share my tips and technique with you. It’s not a complicated pattern so let’s get started! The following are the ‘basic’ rules when working this pattern: Cocktails Inspired by Evolutionary Stages of Pokémon The sophisticated Pokémon trainer demands a beverage that will meet the needs of his or her discerning palate. The Pokémon cocktails developed by the author(s) of the Drunken Moogle blog do just that, with a series that include three separate drinks inspired by each of the evolutionary stages of various pocket monsters. Each series begins with a shot, moves on to a midsize drink served in a tumbler, and then a highball-sized cocktail. It’s notable that each drink builds on the previous, so the Charmeleon contains the ingredients from the Charizard, and so on. The Charmander series looks particularly interesting, partly because it uses the truly excellent Fireball cinnamon whiskey, but also because you can light them on fire. See that weird blue haze above the shot glass?

Chocolate Guinness Goodness Recipe at Epicurious Editor's note: This recipe was developed by Shane Philip Coffey, the chef at Alias restaurant on New York City's Lower East Side. This rich and luscious dessert came about because I needed a special dessert for a St. Patrick's Day tasting menu. I was on a mission to use my favorite beer, Guinness, something I consider to be one of Ireland's gifts to the world. As the 17th of March drew closer, I looked for inspiration at my favorite Irish pub in Manhattan.