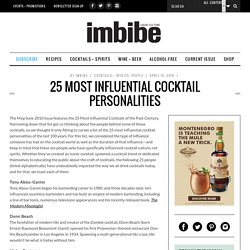 Narrowing down that list got us thinking about the people behind some of those cocktails, so we thought it only fitting to curate a list of the 25 most influential cocktail personalities of the last 100 years. For this list, we considered the type of influence someone has had on the cocktail world as well as the duration of that influence—and keep in mind that these are people who have specifically influenced cocktail culture, not spirits. Whether they’ve created an iconic cocktail, spawned a cocktail trend or dedicated themselves to educating the public about the craft of cocktails, the following 25 people (listed alphabetically) have undoubtedly impacted the way we all drink cocktails today, and for that, we toast each of them. Making Mai Tais. Tiki Ti. EPCOT Explorer sur Twitter : "Here, Twitter. You need this, today. 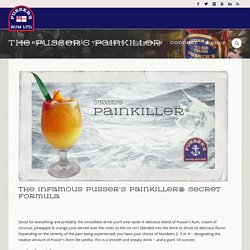 A delicious blend of Pusser’s Rum, cream of coconut, pineapple & orange juice served over the rocks so the ice isn’t blended into the drink to dilute its delicious flavor. Depending on the severity of the pain being experienced, you have your choice of Numbers 2, 3 or 4 ~ designating the relative amount of Pusser’s Rum! Be careful, this is a smooth and sneaky drink ~ and a giant 18 ounces! 2 oz Pusser’s Rum4 oz pineapple juice1 oz orange juice1 oz cream of coconut Fill a big glass or goblet with ice and add the ingredients. The Pussers Painkiller® Story. Hana Reviver: Sammy's Search For The Perfect Rum Cocktail #4 @ Smuggler's Cove (SF) 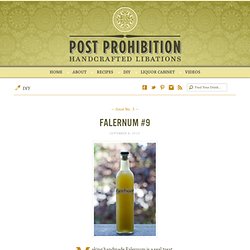 House made Falernum smells and taste wonderful. The Perfect Orgeat Syrup Recipe. Oct4 Since I last wrote about how to make orgeat syrup my coffers have been oozing with the stuff. 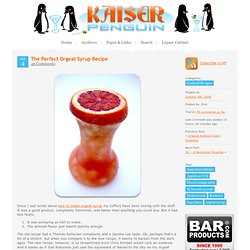 It was a good product, completely functional, and better than anything you could buy. But it had two faults: It was annoying as hell to make.The almond flavor just wasn’t punchy enough. The old recipe had a Thomas Kellerian complexity and a Sandra Lee taste. Post Prohibition. Give Martin Cate All Your Money. Ponche De Tiki - in the Mix Magazine. This drink was inspired by the hot spiced ponche served in Mexico around Christmas. 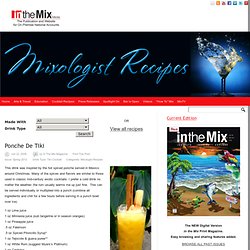 Nirvino Presents: The Dead Reckoning. Mixology Research: The Mai Tai. Ok… so this article started out as an overall discussion about the lack of a common standard as to what a recipe for different cocktails was. 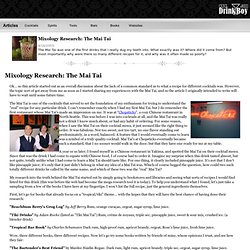 However, the topic sort of got away from me as soon as I started sharing my experiences with the Mai Tai, and so the article I originally intended to write will have to wait until some future time. Green Cointreau? How Old Is It? Make It: Passion Fruit Syrup // The Hurricane Cocktail. Did you know that passion fruit had a season? 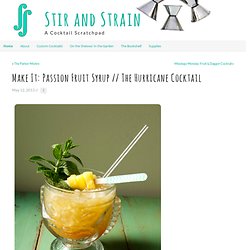 Neither did I until earlier this week. Big thanks to Nathan from the Chocolate of Meats blog for hipping me to this fact. If you are a lover of Tiki drinks you know that passion fruit is a major component in many of those elusive Grog Log drinks. If you’re not familiar, now you know. Pretty much though you’re stuck with commercial flavored syrups that taste more like sad kool-aid than anything resembling a fruit derived substance. Orgeat Syrup. Many classic drinks use orgeat syrup as a component of the drink. 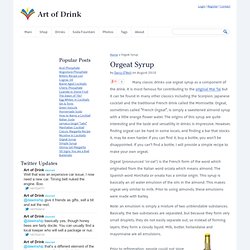 It is most famous for contributing to the original Mai Tai but it can be found in many other classics including the Scorpion, Japanese cocktail and the traditional French drink called the Momisette. Orgeat, sometimes called "French Orgeat", is simply a sweetened almond syrup with a little orange flower water. The origins of this syrup are quite interesting and the taste and versatility in drinks is impressive. However, finding orgeat can be hard in some locals, and finding a bar that stocks it, may be even harder. Rum Reviews « The Rum Howler Blog. Smuggler's Cove - San Francisco, California. Paul Clarke's Falernum #9 Recipe. Paul has just taken the traditional Falernum #8 recipe, added pointless confusion and odd details (like adding 3/4 oz of water + 1 TBSP of water?) 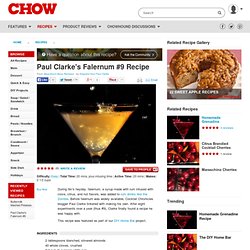 , along with an odd ritual of roasting the cloves and some almonds,,,for what specific gain? This entire process has been overly intellectualized to mask this recipe as his own. But, THIS process/recipe as prescribed by Paul Clark just makes people go from working simply to working pointlessly to achieve the same final product. Just taking the time to "Google" Falernum #8 recipe, will provide anyone an easier recipe. 2013_trader_vics_menu_1231412.jpg (JPEG Image, 5904 × 1712 pixels) - Scaled (17%)

Cachaça and Caipirinha, From the Drink Lexicon of Brazil. A Bar Sprint in Cocktail-Crazed San Francisco. A Mountain Of Crushed Ice. Tiki Cocktail Recipes : The Original Zombie. The Rum Collective: Washington State Liquor Sales: A Field Guide to Privatization. The unanimous vote approving Initiative 1183 is in full effect. Private liquor sales commenced at midnight back on June 1st, 2012 and after being controlled for decades by Washington State, are now being cared for by private businesses. Even if you haven't followed the transition closely, by now, you probably have noticed the signs or shelving displays at your local grocery store or pharmacy showing off their new liquid merchandise. Perhaps you have already taken advantage of this new spirited convenience with a bottle or two. Or, maybe you haven't due to media reports about taxes and high prices. The Rum Collective: Washington State Liquor Sales: A Field Guide to Privatization.

The Perfect Mai Tai Recipe. DIY Sour Mix. DIY Sour Mix. Serious Eats: Recipes Posted by Marcia Simmons, February 24, 2012 [Photograph: Liam Boylan] The true beauty of making this mix is having a fresh, versatile, and easy cocktail mixer for parties. There's no reason to buy sour mix when in 10 minutes you could hand-make something that's infinitely more delicious. Notes: If you'd like to use oranges, grapefruits, or agave nectar, keep in mind that they are sweeter than the ingredients in this recipe so you'll have to adjust the quantities to taste. 1 cup sugar 1 cup water 1 cup freshly squeezed lemon juice 1/2 cup freshly squeezed lime juice Make simple syrup by bringing the sugar and water to a boil, about 7 minutes. Modern Service Professional Week #5 - Rum. The Internet Cocktail Database. Tiki Cocktail Recipes : The Original Zombie. Punch bowl a key to holiday party success.

Setting up a home bar for your holiday party can be a daunting task. To take away the daunting part, there's an easy solution that's also an old bartender trick - the punch bowl. Popping up more and more at bars throughout the Bay Area, this previously prepared beverage is a key to holiday party success.

Bartenders have historically used the punch bowl to save them when they are in the weeds, or when they have a festive occasion on hand. (Witness egg nog.) You're Doing It All Wrong - How to Make a Mai Tai. Tikiroom.com. COMPLETE LIST OF ENTRANTS Thanks to everyone who entered a drink! It was a swell time, mixing, tasting, and discussing everyone's original libations! Tikiroom.com. The Potable Pioneer: The 1934 Zombie – Shrouded in Mystery. Tiki. This retro designation, apart from being very general, may bring several things to mind.

The towering, monolithic statuary of Easter Island, kichey (but awesome) ceramic mugs depicting squat idols with twisted smiles, feathered dresses and flower necklaces: all of these images may spring out of the word ‘tiki’. Another wonderful thing about this term is that it lends its name to a fascinating category of tropical drinks, exploding with exotic flavors and utilizing multiple quality rums to bring you a cocktail experience like none before. In this post, we will examine the grandfather of all tiki drinks, and the one that is probably the most incorrectly copied (a serving of the original recipe can be hard to come by).   Exotica Research. Don's Mix. Grog - The Shameful Tiki Room. Vicglass.jpg (JPEG Image, 1065 × 1455 pixels) - Scaled (45%) Recipe Comparison – The Fog Cutter. According to Dr. Cocktail there is a bit of controversy over who exactly created the Fog Cutter.

Tony Ramos remembers it from Edna Fogcutter’s, where it was the signature drink, but everyone else I’ve come across gives the credit to Trader Vic. You’ll see both of their recipes among many others compared below. This recipe comparison came about after days and days of searching, and I almost gave up hope of finding a cocktail that had sufficient variation. ImbibeMay07JeffBerry.pdf. Recipe Comparison – Scorpion Bowl. Scorpion Bowl Cocktail - The Cocktail Spirit with Robert Hess - Small Screen. Custom Search. Three Dots and a Dash - drink-menu.pdf. Trader Vic's grog glass and mystery gal head. Tiki Drinks to stimulate and delight you. DrFunk_dtb_menu.jpg (JPEG Image, 294 × 468 pixels) Tiki Culture of Los Angeles and the American West. 1468-01.jpg (JPEG Image, 1073 × 1675 pixels) - Scaled (39%) Evils abound at Whiro’s Whim. Sobriety is the disease, we're the cure.

Jeff “Beachbum” Berry Gets Interviewed. Beachbum Berry » Bum Books. Potions of the Caribbean: 500 Years of Tropical Drinks and the People Behind Them strains five centuries of fascinating history through a cocktail shaker, serving up 77 vintage Caribbean drink recipes — 16 of them “lost” recipes that have never before been published anywhere in any form, and another 19 that have never been published in book form. Even more delicious are the stories of the people who created, or served, or simply drank these drinks. DIY Pastis. The Cocktail Chronicles. Six weeks ago or thereabouts, the good Dr. The Cocktail Chronicles. The Modern Bartender - Vancouver, BC - Shopping & Retail. Home. The Modern Bartender. Homemade Falernum Recipe. Deland Tiki – Hand-Crafted Tiki's. The Swank Pad. Kimo’S Mai Tai Recipe from Jen Kidwell.