Gin Basil Smash. Mojito. The exact origins of the Mojito and its name are lost in the mists of time. 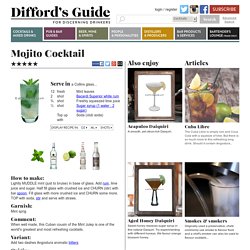 Some trace it back to 1586 and a medicinal drink named after Sir Francis Drake. He was one of a band of privateers sponsored by England's Queen Elizabeth I to plunder Spanish cities in the New World and seize their riches. Cuba was under Spanish rule and King Philip II of Spain had warned his governor in Cuba that he believed Drake intended to raid Havana in order to seize the Aztec gold stored in the city's royal treasury.

Thus Havana was well defended but there was still surprised relief in the city when, after several days of waiting, Drake sailed away from the richest port in the West Indies after firing only a few shots. Drake left Havana and its gold intact, but his visit was a major event - something perhaps worthy of naming a drink after. What is for certain is that the Draque, Drak or Drac was certainly drunk for its perceived medicinal value. Recettes de Cocktails & Matériel de Bar. Top 10 Cocktails - Die 10 besten Cocktails. Meilleur Cocktail du monde :) How To Make 30 Classic Cocktails: An Illustrated Guide.

Aperol. Being An Exotic Drinking Blog, or Around the Web with Jigger, Beaker & Flask. Small Screen™ Cocktail Recipes, Bartending and Mixology and Cooking Videos. Whisky U Whisky U(niversity) is all about Scotch. 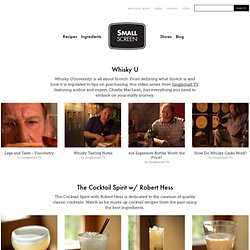 From defining what Scotch is and how it is regulated to tips on purchasing, this video series from Singlemalt TV, featuring author and expert, Charlie MacLean, has everything you need to embark on your malty journey. The Cocktail Spirit w/ Robert Hess The Cocktail Spirit with Robert Hess is dedicated to the creation of quality classic cocktails. Watch as he mixes up cocktail recipes from the past using the best ingredients.

Raising the Bar with Jamie Boudreau From simple garnishes to the most complex molecular mixology, Jamie Boudreau takes you through tips and techniques that are paramount to today's bartender. Kathy Casey's Liquid Kitchen® Kathy Casey's Liquid Kitchen® mixes her talent behind the bar and experience as a chef into a creative journey through great drinks inspired by the kitchen. The Morgenthaler Method Hanging with Harris Home Bar Basics Luxardo - More Than Maraschino Behind the Label. The 7 Best Budget Tequilas. The best tequilas under $25—for cocktails and sipping straight. 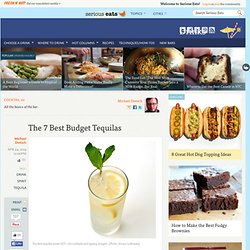 [Photo: Jessica Leibowitz] I don't know about you, but I can drink tequila year-round. I have to say, though, I especially love it in the spring and summer. I think tequila's crisp, bright flavors work very well with warmer temperatures and longer days. So now that the weather's finally getting pleasant, let's talk about which bottles of tequila you should buy. This list includes only 100%-agave tequilas. Mixto, on the other hand, starts with a blend of agave juice and other sugars—glucose or fructose, or both—usually in the form of a sugar syrup. My belief is this: Tequila should taste like agave, not like sugar. Although tequila can legally be made in several Mexican states, most of it hails from Jalisco, a state in the west of the country, about midway down the coast. Jack Rudy Cocktail Co.Jack Rudy Cocktail Co.

Ask a Sommelier: The Best Wines for Daytime Drinking. Perfect picnic wines and the best bottles for day drinking. 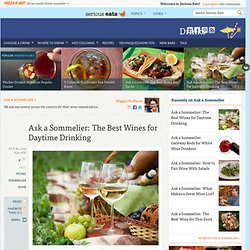 [Photograph: Shutterstock] As the weather warms, we get really excited for the first afternoon spent at a picnic in the park or someone's backyard, sipping something refreshing and cool. But if you're going to drink all day, you have to plan accordingly: you'll want to bring a bottle of wine (or three) that isn't too overwhelming in flavor or high in alcohol. We asked our crew of sommeliers for their favorite picnic wines and their top wine choices for day drinking. Here's what they had to say. "The key words here are crisp, fresh, and (ideally) slightly sparkling; especially when the full heat of summer hits. "I typically recommend anything with a screw cap. "If you're going on a picnic with cured meats, olives, sandwiches and salads, dry sherry rules. I’m Very Bitter. I was asked to be a part of a recent seminar on the subject of cocktail bitters, and it was suggested that I initiate the discourse with the words, “Hi, I’m Ted Haigh, and I’m very, very bitter.” 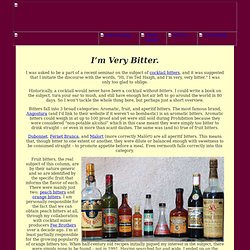 I was only too glad to oblige. Historically, a cocktail would never have been a cocktail without bitters. I could write a book on the subject, turn your ear to mush, and still have enough hot air left to go around the world in 80 days. So I won’t tackle the whole thing here, but perhaps just a short overview. Bitters fall into 3 broad categories: Aromatic, fruit, and aperitif bitters.

Dubonnet, Fernet Branca, and Malort (more correctly Malört) are all aperitif bitters. Fruit bitters, the real subject of this column, are by their nature generic and so are identified by the specific fruit that informs the flavor of each.