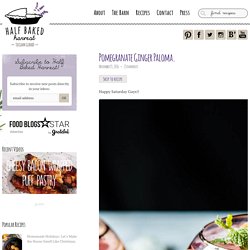 Are you ready for the return of Christmas Drink Saturday?!?! After many of you kindly took the time to comment and email me, asking for the return of the holiday drinks, I decided that Christmas Drink Saturday clearly needed to be brought back! This year I’m starting a week early, for two reasons. Reason one: Thanksgiving is this Thursday and I think it just feels fitting to have a holiday drink for this big holiday too! Reason two: When I sat down last weekend to plot out my holiday drinks, I was three over my limit. Old fashioned drink. Cranberry Shrub and Cranberry Shrub Cocktail. I’ve been laid up this week with a messed up knee, and let me tell you, it hasn’t been easy. 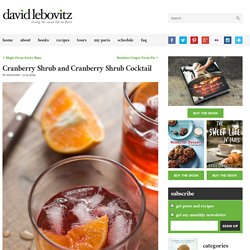 The moment the accident happened, I felt my entire leg buckle, and for the next 72 hours I could barely move. Raspberry-Rhubarb Collins Party Punch. Old Fashioned Cocktails Recipe (for a Crowd) Yellow Tomato Bloody Mary Recipe. I've learned a lot of things in the past year, working on QUITOKEETO. 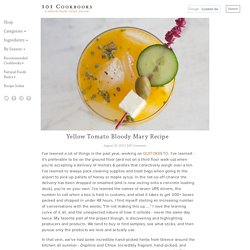 I've learned - it's preferable to be on the ground floor (and not on a third floor walk-up) when you're accepting a delivery of mortars & pestles that collectively weigh over a ton. I've learned to always pack cleaning supplies and trash bags when going to the airport to pick-up pallets of honey or maple syrup. In the not-so-off-chance the delivery has been dropped or smashed (and is now oozing onto a concrete loading dock), you're on your own. I've learned the names of seven UPS drivers, the number to call when a box is held in customs, and what it takes to get 300+ boxes packed and shipped in under 48 hours.

Homemade Rhubarb Syrup - Rhubarb Simple Syrup Recipe. The southern gentleman // sips + whistles - forage + fodder. I know it’s fall in the rest of the country, but we’re still rockin’ 80 degree temps here in texas, so i thought i’d get this cocktail in just under the wire. the sweetness lends it self to summer, but my good friend bourbon can definitely carry any cocktail into sweater weather. 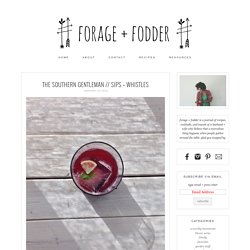 Lemongrass Vodka. This is a very simple infusion… almost to simple to post. 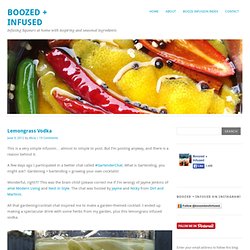 But I’m posting anyway, and there is a reason behind it. A few days ago I participated in a twitter chat called #GartenderChat. What is Gartending, you might ask? Ginger Peach Julep Recipe - Dirty Gourmet. Ginger Peach Juleps 5 Comments » | Posted by emily on Wednesday, July 21st, 2010 Its picnic time. 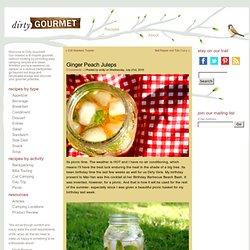 The weather is HOT and I have no air conditioning, which means I’ll have the best luck enduring the heat in the shade of a big tree. Ginger-Lime Fizz with Blueberries Recipe. Nutritional information Serves 10 (Makes 2 1/2 cups syrup) This grown-up ginger ale gets its spicy kick from sliced fresh ginger. 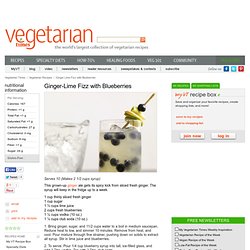 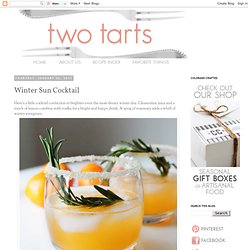 Clementine juice and a touch of lemon combine with vodka for a bright and happy drink. A sprig of rosemary adds a whiff of wintry evergreen. We added some lemon zest to a few tablespoons of sugar to create a citrusy sugared rim. The rosemary is almost entirely for the benefit of your nose (and eyes). The Tippler: Plum Tarragon Smash. This is not your traditional Whiskey Smash. 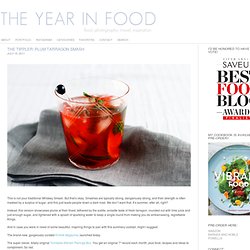 But that’s okay. Smashes are typically strong, dangerously strong, and their strength is often masked by a surplus of sugar, and this just leads people down a dark road. We don’t want that. It’s summer, after all, right? Instead, this version showcases plums at their finest, tethered by the subtle, anisette taste of fresh tarragon, rounded out with lime juice and just enough sugar, and lightened with a splash of sparkling water to keep a single round from making you do embarrassing, regrettable things. And in case you were in need of some beautiful, inspiring things to pair with this summery cocktail, might I suggest: The brand-new, gorgeously curated Kinfolk Magazine, launched today. The super clever, totally original Turntable Kitchen Pairings Box. Happy Friday, all. The Plum Tarragon Smash is part of The July Seasonal Food Guide. Whiskey Tangerine Cocktail Mixed Drink.

After reaching a triple dozen fruit trees in the garden, it’s hard to pick a favorite. 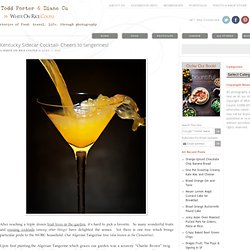 So many wonderful fruits and ensuing cocktails (among other things) have delighted the senses. Yet there is one tree which brings particular pride to the WORC household. Our Algerian Tangerine tree (also known as the Clementine). The Tippler: Rhubarb Fennel Fizz. This cocktail epitomizes spring. It is intensely, deeply pink, buoyed by fennel-infused gin and a vivid rhubarb syrup.

Finished with a vigorous shake, it is light, just sweet enough, and bordering on dangerous for all its demure qualities. Fresh rhubarb is absolutely critical here – during a rhubarb shortage in April, I made this with frozen rhubarb and the flavor left something to be desired. Enjoy it on the roof or lounging around in a grassy backyard somewhere warm, watching clouds roll by, and listening to music that makes you nostalgic and happy all at once. Something like The Boys of Summer. Note: For those of you not fond of the flavor of fennel, it’s pretty mild in this drink.