How to make edible water "bottles". (1) Fruit Reverse Spherification. Homemade Red Enchilada Sauce Recipe. This authentic red enchilada sauce recipe is made with a mixture of Mexican chili peppers that are lightly toasted then rehydrated and processed to form a deeply rich and flavorful sauce. 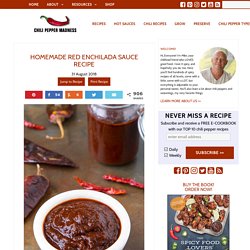 It is one of my very favorites for homemade enchiladas. I have to admit that I’m kind of a red enchilada maniac. I’ll take them any way I can get them – with chicken, vegetarian style, stuffed with cheese, pulled pork, ground beef, however you want to serve them to me. Just gimmee, OK? It’s really about the sauce. I think mankind must have been doing something right in its early days, and the Gods smiled down and said, “Yo, let’s reward you with something for good behavior. I have enjoyed numerous red enchilada sauces in restaurants all over and from friendly kitchens. Why mess with perfection? The Best Red Enchilada Sauce Recipe. How To Make Raw Tahini. Out of milk? Don't have a cow! Be self-reliant with homemade ALMOND MILK. (It's easy & delicious)! Nut milk, especially almond milk, is a popular milk substitute that's fast and easy to make at home. 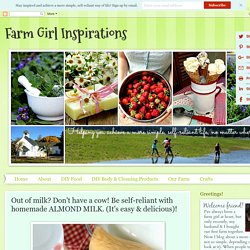 (It takes less time to make almond milk than it does to milk a cow)! Do you want to be more self-reliant when it comes to MILK? Whether you live in the city or the country, when you're homesteading or living off-grid, producing your own milk can be a challenge. Not everyone has the means or ability to keep a dairy animal, such as a cow or goat. Likewise, not every homesteader wants to house a dairy animal, even if they could. I make almond milk nearly every day, and it literally takes only about five minutes. The Healthy Spice Cabinet: 7 Healing Spices and 2 Recipes. A spice is a dried bark, berry, bud, fruit, root, or seed used to enhance flavor in food and drinks. 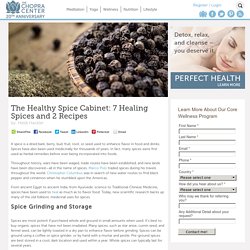 Spices have also been used medicinally for thousands of years. In fact, many spices were first used as herbal remedies before ever being incorporated into foods. Throughout history, wars have been waged, trade routes have been established, and new lands have been discovered—all in the name of spices. Marco Polo traded spices during his travels throughout the world. Christopher Columbus was in search of new water routes to find black pepper and cinnamon when he stumbled upon the Americas.

From ancient Egypt to ancient India, from Ayurvedic science to Traditional Chinese Medicine, spices have been used to heal as much as to flavor food. Spice Grinding and Storage Spices are most potent if purchased whole and ground in small amounts when used. Let’s take a look at six spices with incredible healing properties, plus a few recipes to help savor these spice flavors. Black Pepper Cinnamon Clove Cocoa. 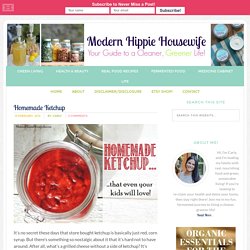 Natural News Blogs 12 Reasons Why Sodas are Horrible for You, Homemade Healthy Soda Recipes. The health dangers of soda have long existed: whether they are regular or diet, caffeinated or caffeine-free, soda is just plain bad news. 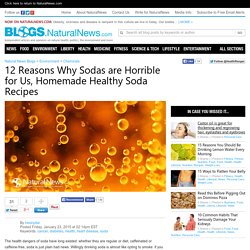 Willingly drinking soda is almost like opting to smoke: if you know how harmful it is, then why do it? Here are some reasons that will make you think twice before reaching for soda, whatever variety or flavor it may be. 12 Reasons Why Soda bad For Us 1. Soda cans have bisphenol A (BPA), which prevents acids from reacting with metal. 2. 3. 4. 5. How to Make Kombucha at Home Cheap and Easy - NaturalON. Photo credit: bigstock.com OK, so if you’ve been reading about how great kombucha is for your health, or if you’ve been paying $4 or more for those bottles of kombucha and you are wondering if you can get it cheaper, or if you are just one of those DIY types that wants to…well…do it yourself, then this is the article you have been waiting for. 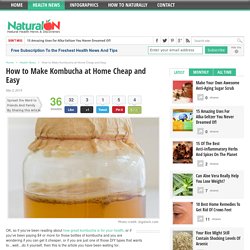 If you are one of the few people who hasn’t gotten on the kombucha train, briefly, kombucha is a fermented, sweetened tea that has been around for thousands of years. It has a slightly tangy but sweet flavor that is absolutely delicious. But it has so much more to offer than just a sweet tasty change of beverage: kombucha contains probiotics, glucaric acid, B vitamins, and is loaded with antioxidants. This method is called “continuous brew.” You will need to have a kombucha container with a spigot so you can remove some of your kombucha without disturbing the rest. Your container should have a cover but not necessarily an airtight cover. Video: Whole Natural Life.

Kefir is a cultured milk beverage. 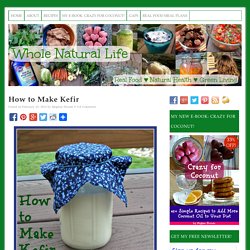 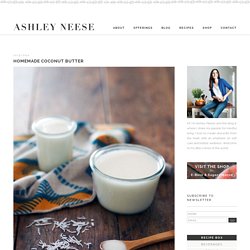 Just as we were settling into cooler weather we’re back in hopefully our final heatwave this year. I’ve been working on new fall recipes but it’s just too hot to turn on the oven today so I’m sharing a superfood staple in my pantry – homemade coconut butter. Ginger Beer Recipe - Earth Energy Healings. There are all kinds of ways that herbs can be enjoyed. 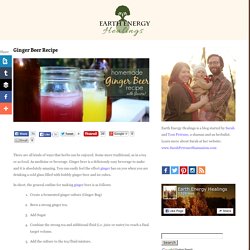 Some more traditional, as in a tea or as food. As medicine or beverage. Ginger beer is a deliciously easy beverage to make and it is absolutely amazing. You can easily feel the effect ginger has on you when you are drinking a cold glass filled with bubbly ginger beer and ice cubes.