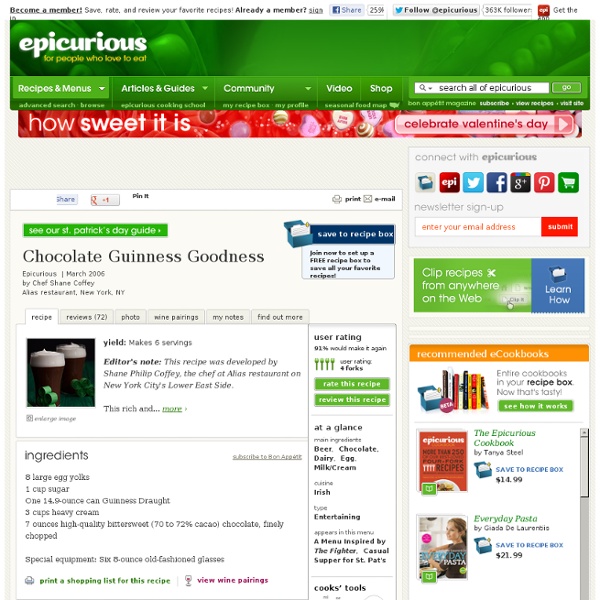 Editor's note: This recipe was developed by Shane Philip Coffey, the chef at Alias restaurant on New York City's Lower East Side. This rich and luscious dessert came about because I needed a special dessert for a St. Patrick's Day tasting menu. I was on a mission to use my favorite beer, Guinness, something I consider to be one of Ireland's gifts to the world. As the 17th of March drew closer, I looked for inspiration at my favorite Irish pub in Manhattan. Make the effort to find a good dark chocolate (about 70 to 72 percent cacao).

Damn Yeah Magical Glowing Cocktails! This drink isn’t a figment of your imagination. I know, that was my initial thought too and I was all “Man, maybe I need to lay off the absinthe!” The glowing, outer-space inspired jungle juice was created by The Campus Companion Party Lab. All you need is gin OR vodka (choose gin if you really, really hate yourself), tonic water, Roses Mojito Passion OR Pink-Lemonade Concentrate, ice, and a black light. Man that doesn’t sound too crazy! Via: www.neatorama.com Losing Control Is Complexity’s Greatest Risk : Managing In most companies, there's no organized measure of complexity. Understanding how to reduce it can lead to profit. November 01, 2011 The complexity of every business in the world is increasing daily, by leaps and bounds. When RIM’s Blackberry system stopped working, one of the likely contributing factors was its inherent complexity. When General Motors was taken apart and dramatically restructured in what was a Herculean effort to reduce complexity, the efforts paid handsome dividends in both profit and market position. Wise men have written about management: "If you can't measure it, you can't manage it." Companies spend a huge amount of time and effort on "risk management" without realizing that the greatest risk is a "loss of control." When complexity reaches critical levels, it not only damages profitability, it increases the risk of losing control. Innovators worry that complexity management will constrain their creativity, but it doesn’t.

How to prevent hangovers Video Drunken Gummies (Vodka-Infused Gummi Bears) This Instructable takes a bit more than a week to complete, but the end result is certainly worth it! You will need: - 1 1/2 cups of vodka (can use more or less if desired)- 1 tub of gummi bear candies, plastic with lid (about 1kg. Tub found at Wal-mart)- 1 can of frozen juice concentrate, any flavour desired (I used fruit punch.) You can keep the juice frozen for now, as you will not need it for a few days. - First step is to open the lid of your gummi bears and pour in the vodka. - Give your newly introduced gummi-bears and vodka a stir, and replace the lid. - Let this sit for five days, stirring a couple of times each day.

What Your Drink Says About You >>> Bang for Your BuckBy staff writer David Nelson January 28, 2007 Essential New Word of the Week: nay nay (definition hint: stop the abuse!) By now, it’s no secret that one of my favorite hobbies, besides collecting Beanie Babies and hunting mimes for sport, is binge drinking. Liquor is like jewelry for the palate: so many colors, so many textures. And like a piece of jewelry, the right drink can serve as the perfect accessory, whether you’re fireside at a ski lodge, or in the women’s bathroom stall at Hooters, trying to wash the taste of semen and wing sauce out of your mouth. I like throwing back glasses in big stone houses, so to speak, but I don’t have a lot of loyalty to one particular type of beverage. I admit, this is perhaps not the wisest way to drink. The point is, as a generalist in the liquor arena and a slightly-paranoid social critic, I’ve noticed that the drink you choose, as an accessory, says a lot about you. (N.B. Wine What it says about you: Beer Malt Liquor Vodka Tequila

How to Make Caramel Apple Shots Photo: Michelle Oddis Once in a while, a party trick comes along that grabs our attention. Food blogger Michelle Oddis of That's So Michelle loves making caramel apple shots we can't imagine anyone would turn down. Using, wait for it, real fruit and time-tested formulas for tasty, jiggly shots that stay put in their edible "shotglasses," Michelle's gotten Food Republic on the gimmicky Halloween bandwagon we've been resisting so fiercely. Try out these irresistible boozy apple treats (and don't hold your breath for a candy corn cocktail on our end). Here's what you'll need: 10 small granny smith apples 1 envelope knox gelatin 1/2 cup water 1/2 cup coconut milk 2 drops yellow food coloring 1 envelope Land 'o Lakes caramel hot chocolate (regular would do just fine if you can't find caramel) 1/4 cup sugar 1/2 cup butterscotch schnapps lemon juice Halve and hollow out apples, cutting them from the stem down using a melon baller or spoon. Cut halves in quarters and those quarters in half again.

Naughty Shirley Temple Jello Shots Ingredients: Cherry jelly powder Orange jelly powder Maraschino cherries with stems* Lemon lime pop Vodka Grenadine (optional) Mix 1 cup of boiling water with the cherry jelly powder. Stir until completely dissolved. Cut the bottoms off of the cherries so they stand up and place one in each muffin cup. Mix 3/4 cup of boiling water with the orange jelly powder. To easily remove the jello shots from the muffin tin warm up the bottom of the tin by setting it in warm water. Enjoy watching your friends attempt to tie the stems with their tongues! *Maraschino cherries with stems are really hard to find in Ontario, I finally got mine from Bulk Barn but they told me they don't always carry them so be sure to call in advance. How Old Spice Revived a Campaign That No One Wanted to Touch The Modern Media Agency Series is supported by IDG. Ad agency JWT has used mobile marketing for two brand name clients. During a marketers’ panel discussion, John Baker explained the important role mobile played in a promotion for Zyrtec and for a campaign across media for Macy’s. Maybe advertisers should stop hoping that their new campaigns should be super-successful and instead wish for them to be moderately well-received. After all, almost no one has been able to create a second act for ad campaigns that become cultural touchstones. If anything, adding a social media layer to a successful campaign only raises the stakes as bloggers, Tweeters and Facebookers pile on to celebrate and watch to see if new ads live up to the set standard, then mercilessly scold it for not doing so. "It was definitely daunting," says Jason Bagley, a creative director at Wieden. But who would play Mustafa's foe? Upon meeting Fabio, Bagley and Allen soon discovered why. Eventually, they found a rhythm.

Mocha Granita OMG coffee, I love you. Raise your hand if you go to sleep dreaming about the next morning’s cup of coffee… Raise your hand if you’re sort of a snob about coffee (and you don’t care who knows it)… Raise your hand if you love coffee in baked goods… If I were you, my hand would’ve been raised for all 3. Whatever. In the summer I’m all about desserts that don’t require an oven. Back to no oven…so, granites…I love them. This one has a little combo of coffee and chocolate. That’s kind of the only thing with granitas, they definitely take a little checking up on. I topped mine with a dollop of whipped cream. Mocha Granita Print this recipe! 1 cup coffee 3 cups water 1/2 cup sugar 3 tablespoons Dutch processed cocoa powder Whipped cream (optional) 1. 2. Tagged as: Chocolate, Coffee, Dessert, granita, Italian, Sugar