Iz Bananaz. At first glance, this mix of funky cachaça and bittersweet Amaro Montenegro seems like an odd combination, but they blend together seamlessly when shaken up with the sweet and sour notes of toasty banana liqueur and lemon juice. 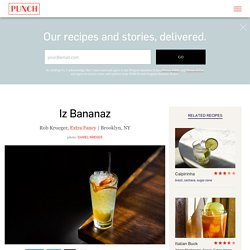 Da Hora Cocktail Recipe. “I wanted to make a Latin-inspired Royale,” explains Ivy Mix of the effervescent inspiration behind her Da Hora cocktail. 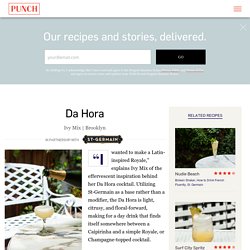 Utilizing St-Germain as a base rather than a modifier, the Da Hora is light, citrusy, and floral-forward, making for a day drink that finds itself somewhere between a Caipirinha and a simple Royale, or Champagne-topped cocktail. You need to enable JavaScript to vote Ingredients Serving: 1 1 1/2 ounces St-Germain 1 ounce cachaça 1/2 ounce fresh lemon juice 1/2 ounce fresh grapefruit juice 2 ounces cava, to top Garnish: cucumber wheel. Beggar's Banquet Cocktail Recipe. What's Up, Doc Cocktail Recipe. The dining concept at SaltRock Southwest Kitchen, in Sedona, Ariz.’s Amara resort and spa, rotates cocktails seasonally, moving from fruit-forward ones in the warmer months to rich, decadent, bittersweet sips as the temperature dips. 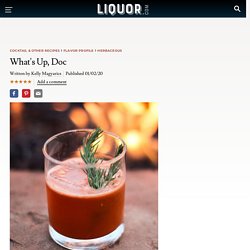 Lead bartender Eduardo “Eddy” Rocha uses a Robot Coupe juicer for this peeper-friendly drink, which starts with pressed carrot-ginger juice that’s shaken with bourbon, Fernet-Branca and lemon juice and garnished with rosemary or thyme. “Nature has made a perfect cocktail in most fruit, so you only need to extract that essence and allow the drink to balance itself,” he says. The Detroiter. Bring Back the Yellow Parrot. While most backbars typically house just a single bottle of absinthe—tapped mainly for Sazeracs and Corpse Revivers—Brooklyn’s Maison Premiere prefers to carry between 30 and 40 varieties at any given time. 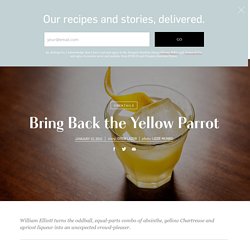 Though the bar suspended operations last March and remains dark as of early 2021, when it should be toasting to its 10th anniversary, the hiatus hasn’t discouraged bar director and resident wormwood conservator William Elliott from making the case for an all-time favorite absinthe cocktail—the Yellow Parrot. “On paper, it was such an outlandish recipe,” recalls Elliott of the equal-parts mixture of absinthe, yellow Chartreuse and apricot brandy. “Commingling these sweet and strong ingredients … it sounded disastrous.” But the Yellow Parrot has been a stalwart of iconic recipe books since the early 20th century. 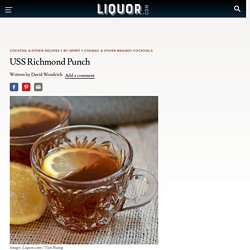 That November day in 1621, the Pilgrims—bless their grim, determined souls—found themselves sweating things out at the end of a very long, very thin supply line. That meant, among other things, no wine, no beer and not even any gin. (White Anglo-Saxon Protestants without gin? It doesn’t bear thinking about.) So what say we forget about celebrating 1621-style and take our next option.

Abraham Lincoln made the holiday official in 1863. Butter “Nut” Craig Cocktail Recipe. Each fall, pumpkins and other gourds come out in full force. 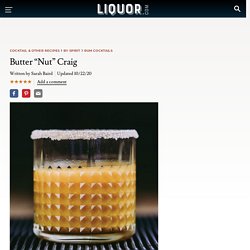 They adorn doorsteps, festoon display windows and dominate restaurant tables, but these seasonal favorites are more than just decorations. Increasingly, bartenders are incorporating them into cocktails. One such cocktail is the Butter “Nut” Craig by D.C. bartender, bar owner and distiller Todd Thrasher. It combines dark rum and orange liqueur with butternut squash, fresh lemon juice and aromatic bitters. The Straight Up. Instructions: Add the whiskey, Fernet-Branca and Sweet Vermouth to a chilled mixing glass. 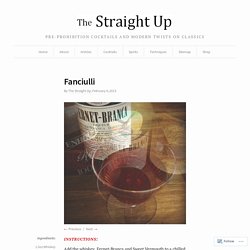 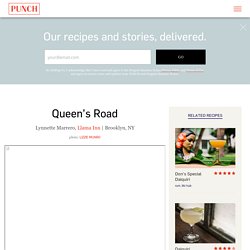 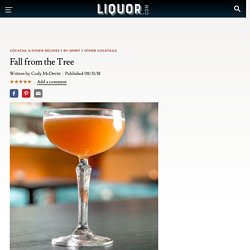 “It’s served the way we make all of our signature cocktails at The Happiest Hour by combining the base ingredients first and then allowing guests to pick their base spirit.” This recipe originally appeared as part of “3 Great Batched Cocktails for Your Football Parties.” 1 1/2 ounces Laird’s applejack (or bourbon or scotch) 1 ounce fresh apple juice 1/4 ounce fresh lemon juice 1/2 ounce cinnamon syrup* 1 dash The Bitter Truth aromatic bitters Garnish: apple slice Add all the ingredients into a shaker with ice and shake until well-chilled. Strain into a chilled coupe glass. *Cinnamon syrup: Add 1/2 ounce cinnamon bark, 2 cups turbinado sugar and 2 cups water into a saucepan and bring to a boil, stirring until sugar dissolves. Tender Knob Cocktail Recipe. Pear & Pub Ale Party Punch Cocktail Recipe. If you want to get everyone congregating around the punch bowl instead of the water cooler, try this convivial sip from Jonathan Webb, the bar manager at Fine & Dandy in Jackson, Mississippi. 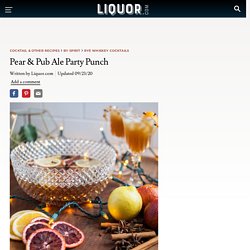 His Pear & Pub Ale Party Punch calls on two spirits, two juices, a homemade syrup and some beer, so there’s a lot going on within. The punch begins with rye whiskey and dark rum. It’s a potent combo to be sure, but one with complementary flavors that work well together—rye’s natural spiciness merges with the rich dark rum to produce a boozy synergy. Orange and lemon juices provide a welcome vein of fresh citrus that runs through the cocktail, while cinnamon-pear syrup adds sweetness, complexity and spice. For the beer, Webb recommends a good English ale, like Lucky Town Pub Ale, which is brewed right in Jackson. While Webb’s recipe hits all the right notes, you can temper the ratios if the punch is too strong for your crowd.

A Hibiscus & Aperol Pitcher Cocktail for Galentine's Day. Boat House Punch Cocktail Recipe. The citrusy, bubbly Boat House Punch is an original recipe from Julie Reiner, best known for her seminal New York bars Clover Club and The Flatiron Lounge. The large-format drink appears in her book, “The Craft Cocktail Party: Delicious Drinks for Every Occasion,” and it’s primed to serve a crowd.

The punch begins with a lemon oleo saccharum, which sounds a lot more intimidating that it is to make. Essentially, you’re just muddling lemon peels with sugar and letting the combination sit. As the two ingredients mingle, the citrus oils leach into the sugar and you’re left with a rich, delicious syrup. Two-Hit Fig Punch Cocktail Recipe. Spiced Pumpkin Flip. Vegan Pumpkin Pie Martini - Gluten-free and Refined Sugar-free.

I will keep this one short, yesterday’s post was enough words to read for the next week. Phew! What can I say, sometimes I just have stuff I wanna chat about. Thanks so much for being here to read it and all the rest of my ramblings! Surfer on Acid Cocktail Recipe. Paper Plane. Sam Ross, the longtime bartender at Milk & Honey (now Attaboy), created this simple, equal-parts drink for the opening menu at The Violet Hour in Chicago, a bar where he never worked. “It’s my second most well-traveled drink,” after the Penicillin, said Ross. It is particularly popular in Toronto, for reasons that remain mysterious to Ross.

Strain into a rocks glass over fresh ice. Slowly pour the wine over the back of a bar spoon so that it floats on top of the drink. 10 Summer Cocktails to Make Right Now. High King Highball Cocktail Recipe. At East Village cocktail destination Pouring Ribbons, cocktails get “rated” on a scale of “refreshing” to “spirituous,” “comforting” to “adventurous,” to help guide you to the right drink. (Chartreuse lovers, ask for the bar’s vintage Chartreuse selection). On the refreshing side, the High King Highball was created by bar-star Joaquín Simón and features Clontarf Irish whiskey and Aperol, along with muddled raspberries, lemon and grapefruit juices, simple syrup, Peychaud's bitters and a splash of soda.

Lunar Eclipse Cocktail Recipe. Lunar eclipses only occur a few times each year, but if you want to experience one more often, you can—you just need to mix up this Lunar Eclipse cocktail. It comes from bartender Matt Ragan, who created the drink while working at Victor Tangos, the former Dallas hotspot known for its gastropub plates and craft cocktails. Mango Coconut and Orange Vodka Crush - Heather Christo. When Pete and I were in New York last week (OMG- how could that have only been last week?!!) We were walking through SOHO and stumbled on a really awesome Mexican restaurant. Since we were in day drinking mode, we ordered a whole bunch of drinks to sample. The one that completely floored me was a combo of coconut, mango and orange mixed with my favorite booze (Vodka!!).

Botanical Bee's Knees Cocktail Recipe. Pomelomosa Cocktail Recipe. Drink Your Veggies Cocktail Recipe. Drinking With Benefits: 2 Probiotic Cocktails to Enjoy This Weekend. You’re not 21 anymore, so it’s time to step-up your cocktail game. Or maybe you are 21, in which case: enjoy your youth! Soon you will be old and burdened by student loan debt! Anyway. Banker’s Lunch. Italian Buck. The Straight Up. Instructions: Add the green chartreuse, fresh pineapple juice and lime juice to a cocktail shaker. Add ice and shake vigorously until the outside of the shaker begins to frost. Strain into a collins glass over ice. Contessa Cocktail Recipe. Dove Dispatch - PUNCH. St. Germain Cocktail With Pineapple Juice - DelishPlan.

Do you have siblings? The Healer Cocktail Recipe. Licor 43 Recipes. Grounds For Divorce Cocktail Recipe. Balón 43 Cocktail Recipe. Pepper and Vanilla Cocktail Recipe. Golden Retriever Cocktail Recipe. Gentian cocktails – the world's 100 best. Continuing my quest, I'm sampling 100s of gentian liqueur cocktails to boost the number of tasty drinks using Suze on Difford’s Guide and for a cocktail book featuring the 100 best Suze cocktails to be published later this year. (Should have been 2018 but there's just so many to make and try!) 10 new Suze cocktails These are the ten latest recipes I’ve made, tried and liked enough to add to this site (in January 2019). Raised by Wolves Cocktail: Dreadlock Holiday - Imbibe Magazine. In this tropical take on the White Negroni, pineapple liqueur and a special house blend of Jamaican rums help balance the bitter bite of Suze. 1 ½ oz. Wolf Rum (or use your favorite Jamaican rum) ¾ oz. Suze ¾ oz. bianco vermouth 1 tsp.