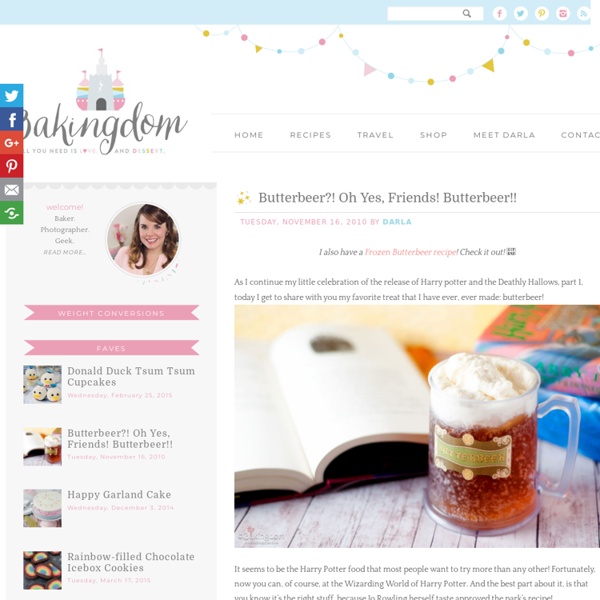 I also have a Frozen Butterbeer recipe! Check it out! 🙂 As I continue my little celebration of the release of Harry potter and the Deathly Hallows, part 1, today I get to share with you my favorite treat that I have ever, ever made: butterbeer! It seems to be the Harry Potter food that most people want to try more than any other! I was lucky enough to go to WWOHP back in June. It. was. amazing. As for the butterbeer…well, I have to admit that it was definitely on the top of my list of things to do there! It was so delicious! There are several homemade butterbeer recipes that have popped up online since the opening of WWOHP, but I have to admit, I haven’t tried any of them. I started with the butterbeer itself. I considered butterscotch syrup, but ruled it our for two reasons: 1. 2. What else could give me that buttery flavor, but butter? Now, all I had to worry about was the “foam.” This has been, by far, the most fun, the most exciting thing that I have made. Ingredients Recipe by Darla

Strawberry Margarita Jell-O Shots When thinking of Super Bowl foods strawberries don't usually make the cut. However... mix the strawberries with a little tequila and turn them into a margarita and you are getting closer! With our sunny Citrus Blush already mixed and in the pitcher we weren't really in need of another cocktail, but when I came across these cute little shots I couldn't resist putting them on my Super Bowl Extravaganza Table. Hollowed out strawberries work as a vehicle for a Jell-0 concoction of strawberry gelatin, tequila and a touch of Grand Marnier. Strawberry season here in San Diego is a tad behind schedule and I had a bit of trouble finding those beautiful, plump and bright red berries, but we made do with the Farmer's Market offerings and found some that were good enough. The gelatin is mixed with water, 4 oz of tequila and 2 oz of Grand Marnier. Edited 2/10/11: Tamera, in the comment section below, suggests using all liquor in the gelatin mix, no water.

Cherry Limeade the Radioactive Way Want that dazzling super glowy look? Try this radioactive cherry limeade. It’s the secret skin enhancer of the stars. Your new glow in the dark skin will cause car accidents from the glare, and all your friends will be envious. Call now, for only $19.95 plus $1,245,967 shipping and handling, you can turn your whole life around. Warning: Side effects may include hyperactivity, addiction, and radioactive iodine poisoning. Ingredients1 ½ cups granulated sugar1 ½ cups waterSmall pinch of salt1 ½ cups fresh squeezed lime juice1/3 cup maraschino cherries, not the juice2 TBS grenadine3 to 5 cups cold water (Depending on how strong you like your limeade)Maraschino cherries & lime slices for garnish In a sauce pan bring sugar, 1 ½ cups of water, and a pinch of salt to a boil. Place all the ingredients together in a half gallon pitcher and stir to combine. Don’t forget to read the very small fine print!

The Ultimate Strawberry Lemonade One of the first times I ever realized that – HEY! I can cook for myself! – was when I first learned to make lemonade. I magically found the refrigerated lemon juice at our house and followed the directions to make my own lemonade. Sorry for the detour. Anyway, there was a summer there where I made my own lemonade every single day, making sure to rub it in my sister’s face that I knew how to and she didn’t. The key to this being the ultimate lemonade is that you blend it up with the lemon rind in there. And any time of day for that matter. (makes 2 pint-glass servings with ice) 3/4 cup sugar2 large lemons, microwaved for 30 seconds2 cups water1 cup of frozen strawberries, microwaved for 1 minute (you could use fresh, but I think the frozen works better here) In a blender squeeze the lemons and add the rest of the lemon, rind and all. **Note: I like to microwave the lemons to release more of the juices, and microwaving the strawberries does the same sort of thing.

Life Blog | Personal Finance News & Advice Mint is, in all honesty, one of the best spring investments you can make. No, not Mint.com — that’s a given. Mint as in, the herb. For as little as $2.50 per pot at a farmer’s market, you’ll have years of bounty. The perennial is hardy: Frugal Foodie has had the same pot on her balcony going on five years now. Growing your own is a much better bet than buying fresh from the supermarket, where a tiny clam shell costs $2 and loses its pep within days. There are also numerous mint varieties beyond a basic mint, if you feel like getting adventurous. Frugal Foodie likes chocolate and ginger mints, and there are also pineapple, orange and apple, among others. Even if you’re not much of a chef, mint is a great investment for bar purposes alone. We asked cocktail aficionados for their best options. Strawberry Mint Champagne Cocktail Mint-infused syrup provides a little zing in this recipe from Michelle Maskaly of “The Adirondack Chick.” Want a mintier flavor? Minty Cucumber Gin & Tonic Berry Mint Crush

Boozy Salted Caramel Mocha Happy Holidays! Now that Thanksgiving is past I’m already thinking about all of the entertaining we’ll be doing from now thru New Year’s Eve. Yes I get a little giddy about things like that. I’m a complete party nerd. There I said it. We like to keep things simple and easy whether we’re entertaining 2 close friends or a group of 20. This year I’m going the Silkology route. Want to try out Silkology on your own? Baci! This is a sponsored conversation written by me on behalf of Silk. Recipe adapted from Silkology. Boozy Salted Caramel Mocha What You Will Need: 1/2 cup Silk Chocolate soymilk 1 shot espresso Pinch of salt 2 tablespoons caramel flavored syrup, divided 1 shot Bailey's Irish Creme whipped cream 1/8 tsp sea salt for garnish What To Do: Combine Silk, espresso, pinch of salt, 1 tablespoon caramel syrup and Bailey's in a saucepan and heat just until warm.

Minted Cucumber Cooler Posted by Cara on Wednesday Aug 28th, 2013 | Print Mad Men’s Betty Draper downed gimlets to hide her troubles. Raymond Chandler’s Philip Marlowe sipped gimlets as he complained about their slipping quality. When I went to name this latest Cocktail Hour cocktail a gimlet, I found out about the drink’s controversial past. The scurvy prevention. The corn syrup addition. My cooler’s not so far from the modern-day gimlet, though, which contains a lot of lime juice and a little sugar or simple syrup, and vodka or gin. But the original gimlet, invented by Sir. So there’s the controversy: does a gimlet have to contain homemade lime cordial à la Sir. Wanting to respect history, I discarded the name gimlet and the modern fresh lime juice variation, dismissed as too simple by all these characters. I’m telling cocktail stories and sharing fun vodka recipes in partnership with Stoli Vodka and their ORGNL.TV site (especially the awesome Taste vertical!). Savor Stoli Responsibly. **Recipe**

Let's Make: Soda Syrups! Soda syrup! Have you ever worked at a restaurant where you had to change out the bags of syrup for the soda fountain? And you got it all over yourself the first two times because you didn't know how to open them? And then the third time you thought you did it right but it leaked all over the place? Me too! As revenge, let's learn how to make that at home. Soda syrup's main purpose in life is to be mixed with seltzer water. Today we're going to make a cola. Cola might seem mysterious to you (who the hell knows what that flavor really is?) I'll probably give a larger run-down later on in life about the Story Of Cola but for now we'll just treat it as the product we're aiming for. When you get down to it, soda syrup is just a syrup (water + sugar) that has some extra flavors in it. Ingredients Directions Put it into a pot, simmer it for 10 minutes, then let it cool down for about 45 minutes. Store it in the fridge, and when you're ready for soda, just mix it with some seltzer!

Homemade Soda Syrups — My Own Ideas I was gifted a SodaStream last Christmas and have been happily making bubbly water ever since. Previously, I had been spending a lot of money buying bottles of sparkling water. I love that I can now make my own at home for much cheaper (about $0.20 per liter). I’m known amongst my friends for throwing parties that are complete with decorations, desserts, games and favors. Ginger Syrup (for Ginger Ale):Adapted from Former Chef • 1 cup brown sugar • 1 cup white sugar • 2 cups water • 4 oz peeled and sliced ginger (I started with 6-7 oz whole fresh ginger) • 2 tsp cardamom pods • 1 tsp whole allspice • 1 tsp peppercorns • 3 ea. star anise pods In a small pot, combine sugars with the water and add the ginger. Mix about 2 tbsp of syrup with 12oz soda water and ice (add more or less syrup to fit your taste). Grapefruit Syrup:from Martha Stewart • 2 cups sugar • Zest of 2 pink grapefruits • Juice of 1 pink grapefruit • 2 teaspoons lemon juice • pinch of salt • 2 cups water Rachel (184 Posts)

Guest Post: Horchata by Kathryne from Cookie + Kate June 27th, 2012 I’m so thrilled to welcome Kathryne to Turntable Kitchen this week. We’ve developed a lovely friendship through this crazy thing called the Internet and I was thrilled to finally meet her in person in New York City back in May. Although horchata (pronounced or-CHA-tah) is a traditional Latin American drink, I have yet to try it outside of the country. Kyle, my friend and a bartender at Má Pêche, said the restaurant started making horchata for the kitchen workers but it became so popular with the entire staff that they decided to put it on the menu. Horchata, which can be made from various types of soaked grains and nuts, manages to be creamy and comforting but at the same time light and refreshing. My dairy-free horchata recipe, which tastes very similar to the horchatas I’ve tried while traveling, is basically agave-sweetened rice-almond milk with cinnamon. Horchata Recipe Adapted from a Rick Bayless recipe. Ingredients: