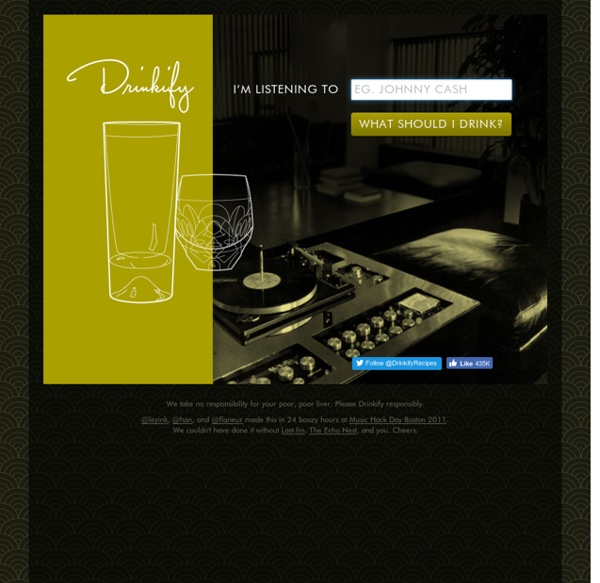 Bizarre Websites On Which You Can Kill Time With Style - Smashing Magazine Modern Web-building technologies allow designers to realize their most daring and creative ideas. Enhanced interactivity and a remarkable visual appearance can be achieved by means of such tools as Flash, JavaScript and Papervision3D, to name just a few. These strengths usually impress and entertain visitors and thus are often used for conceptual artistic presentations and promotional campaigns. In this post, you’ll find a collection of amusing websites that, by combining unconventional (and sometimes bizarre) ideas and clever JavaScript and Flash effects, will entice you to play on them for an embarrassing long time.

The most mouth-watering toastie recipes EVER All this time you regarded the humble toastie as something that was just...nice. Think Niall Horan from One Direction: plain, inoffensive and more popular in America. But you were wrong. So wrong. Because in reality, the toastie is Harry Styles: naughty, sexy, to be enjoyed at any age.

Treasure Island, Ontario Treasure Island from the south Treasure Island, also known as Mindemoya,[1] is a large island in Lake Mindemoya, on Manitoulin Island. As Manitoulin's largest island, it is said to be the world's largest island in a lake in an island in a lake. The island has no permanent residents, but there are some cottages. Treasure Island lies at an elevation of 200 metres (660 ft) above sea level, with its highest point being about 225 metres (738 ft) above sea level. Eight Types of Hecklers and the Comedians Who Shut Them Up In the 2007 documentary Heckler, Joe Rogan says that “the number one thing about hecklers is 100% of them are douchebags.” A stand-up comedian’s act depends on the audience reaction by nature, but when someone attempts to derail the performer’s work, well, that’s something a douchebag would do. Still, heckling creates exciting moments of discomfort for the audience, and hecklers have instigated some great moments in comedy (Bryson Turner’s comeback) as well as some terrible moments (Michael Richards incident). Whether the outcome is funny, awkward, or awful, the eternal battle between heckler and stand-up is always fun to watch. Here are eight kinds of hecklers, and fifteen different ways of dealing with them. 1.

DIY Friendship Bracelet For several months now, we’ve been receiving emails requesting a friendship bracelet DIY. Well, friends, ask and you shall receive! Today, we’ll give you a step by step tutorial on the classic chevron pattern. If you used to whip up friendship bracelets like a champ in grade school and have since forgotten how, consider this a refresher course. And if you can make these with your eyes closed and arms tied . . . umm, can we still be friends? You’ll need:embroidery threada safety pin or tapea pair of scissors

Internet Memes Timeline Trololololololololololo man Feb 28, 2010 6:00 PM Added to Youtube in November of 2009 the Video "Я очень рад, ведь я, наконец, возвращаюсь домой" had only few views until it was posted into several music blogs in march of 2010. In a week more than 1 million people watched the Trololololololololololo man sing his song. frankie exclusive diy: dip-dyed shoes Winter isn't quite here, but already folks are starting to revert back to their dreary cold weather wardrobes. Ugh. How boring! We're not ready to retire our brightly coloured hues just yet, how about you?

Lesbian Sex Positions For Dummies A girl's got to start somewhere hasn't she!? I'm sure we've all been in situations where we're left wondering what exactly the side-show contortionist we've hastily bedded is trying to achieve as she vaults across the room via the chandelier (what can I say, the décor at my house is a little pretentious!). Let's face it; it doesn't always quite go to plan.

Historical Photos (22 pics) Fidel Castro laying a wreath at the Lincoln Memorial in Washington, 1959 1912 World Series Japanese plane shot down during the Battle of Saipan, near Saipan; circa June 15 – July 9, 1944 British SAS back from a 3 month long patrol, North Africa, January 18, 1943 Ten Novels Every Aspiring Writer Should Read TYEE LIST #9: Put down that pen and curl up with these giants. Treat your craft seriously, as does Gabriel García Márquez. Some time ago I published an article about 10 novels that aspiring writers should avoid. It wasn't because they were bad -- most of them are modern classics -- but because their readable styles looked so easy that they might seduce a young writer into imitating them.

i get it:) well...that's internet, i guess there's nothing private anymore... on the bright side - people can actually share useful sites, such as Drinkify:)))) by milakelm Mar 22

it's on my tree as well... go to settings (upper right corner) and turn off notifications by milakelm Mar 22

no, what I meant was agreeing to adibug & harithaaa's comment; it is sad that pearltrees not private :( by owch Mar 20

Nothing sad about it:-) why would anyone listen to music AND drink in solitude:-))) sharing is caring by milakelm Mar 20