Amazing Space- Fast Facts: Mars. Mission to Mars. Planets For Kids - Solar System Facts and Astronomy. Ask an Astronomer for KIDS! - How long is a day on Mars? Astronomy for Kids: The Planet Mars. Moons: 2 Mass: 11% of Earth Diameter: 4217 miles Year: 1.9 Earth years Day: 24.6 hours Temperature: -190 to +60 degrees F Distance from the Sun: 4th planet from the sun, 142 million miles What is Mars like? 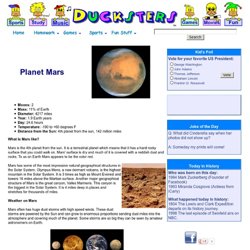 Mars is the 4th planet from the sun. It is a terrestrial planet which means that it has a hard rocky surface that you could walk on. Mars' surface is dry and much of it is covered with a reddish dust and rocks. 10 Things You Should Know About Mars - Solar System Facts About Mars. Named for the Roman god of War, Mars probably got this name due to its red color. 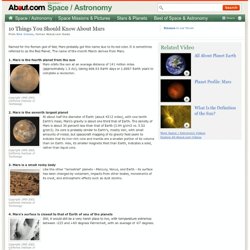 It is sometimes referred to as the Red Planet. The name of the month March derives from Mars. 1. Mars is the fourth planet from the sun Copyright 1995-2003, California Institute of Technology Mars orbits the sun at an average distance of 141 million miles (approximately 1.5 AU), taking 686.93 Earth days or 1.8807 Earth years to complete a revolution. 2. At about half the diameter of Earth (about 4212 miles), with one tenth Earth's mass, Mars's gravity is about one third that of Earth. 3. Like the other "terrestrial" planets - Mercury, Venus, and Earth - its surface has been changed by volcanism, impacts from other bodies, movements of its crust, and atmospheric effects such as dust storms. 4. Still, it would still be a very harsh place to live, with temperature extremes between -225 and +60 degrees Fahrenheit, with an average of -67 degrees. Mars Weather. Want to stay on top of all the space news? 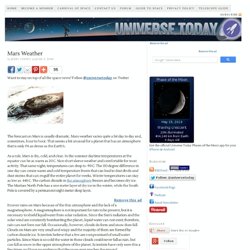 Follow @universetoday on Twitter The forecast on Mars is usually dramatic. Mars weather varies quite a bit day to day and, sometimes, hour to hour. That seems a bit unusual for a planet that has an atmosphere that is only 1% as dense as the Earth’s. As a rule, Mars is dry, cold, and clear. Mars. Mars Facts For Kids. Mars is perhaps one of the only planets in our solar system that resembles a lot with our own planet, the Earth. 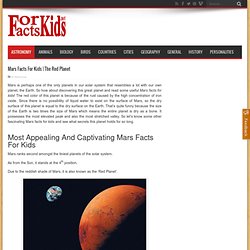 So how about discovering this great planet and read some useful Mars facts for kids! 5 things you may not know about the planet Mars. Fun Facts about Mars. This is a fun subject . 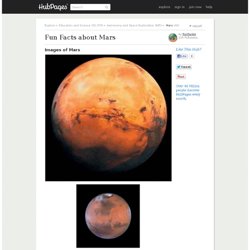 Race to Mars : Mars Facts: Life on the Red Planet. If you like dramatic weather, dusty conditions and the most extreme natural landscapes in the solar system, the spectacular red planet of Mars could be your destination of choice. 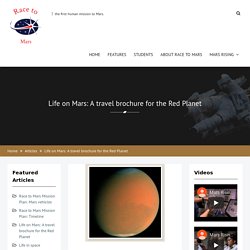 How’s the weather? Driven by the fine, sunlight-absorbing dust that engulfs the planet instead of the water that triggers meteorological changes on Earth, the weather on Mars is characterized by dust storms, dust devils and raging winds. The two hemispheres of Mars, like those of Earth, experience four seasons, and carbon dioxide condenses and forms seasonal frost deposits during the Martian winter. The weather on Mars is mostly predictable, and while the average global temperature is cooler than Earth at 55°C (-133 to 27), temperatures can rise and fall quickly. With an atmosphere only 1% as thick as Earth’s and no magnetic field to shield from solar flares and cosmic rays, the Red Planet offers harsh conditions that are much more severe than on Earth.

Keeping the dust out. Mars for Kids. The Planet Mars. 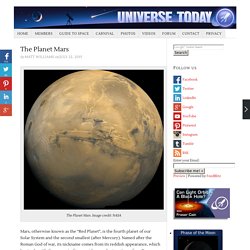 Image credit: NASA Mars, otherwise known as the “Red Planet”, is the fourth planet of our Solar System and the second smallest (after Mercury). Named after the Roman God of war, its nickname comes from its reddish appearance, which has to do with the amount of iron oxide prevalent on its surface. Every couple of years, when Mars is at opposition to Earth (i.e. when the planet is closest to us), it is most visible in the night sky. Because of this, humans have been observing it for millennia, and its appearance in the heavens has played a large role in the mythology and astrological systems of many cultures. Size, Mass and Orbit:Mars has a radius of approximately 3,396 km at its equator, and 3,376 km at its polar regions – which is the equivalent of roughly 0.53 Earths. At its greatest distance from the Sun (aphelion), Mars orbits at a distance of 1.666 AUs, or 249.2 million km.