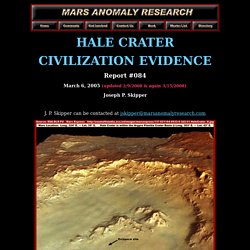 Skipper J. P. MARS HALE CRATER CIVILIZATION EVIDENCE Photo Image. Description: The above image is a very nice one of the Hale Crater evidence completed by a viewer known to me only as C.K. 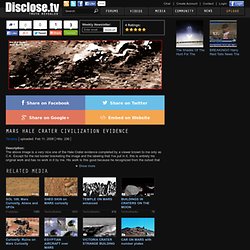 Except for the red border bracketing the image and the labeling that I've put in it, this is entirely his original work and has no work in it by me. His work is this good because he recognized from the outset that obfuscation tactics were present as upper layer additions in the image and first must be defeated to get the best visual results. It should also be noted that, although his tactics mimicked my own, they were arrived at entirely on his own with no input by me. As you can see, it offers an improvement over my own imaging. Nasa uncovers new 'life on Mars' evidence after rover got stuck in the mud.

CYDONIA REGION LATEST. Mars Civilization:Evidence By European Space Agency. Hale Crater - Civilization Evidence. By Joseph P. Skipper March 6, 2005 from MarsAnomalyResearch Website click image to enlarge. The Mounds of Cydonia. The so-called mounds in the Cydonia region of Mars are certain formations which were first pointed out by Richard C. 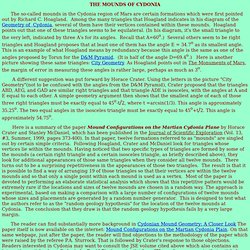 Hoagland. Among the many triangles that Hoagland indicates in his diagram of the Geometry of Cydonia, several of them have their vertices contained within these mounds. Hoagland points out that one of these triangles seems to be equilateral. (In his diagram, it's the small triangle to the very left, indicated by three A's for its angles. Recall that A=60o.) A different suggestion was put forward by Horace Crater. MARS: Egyptian statue revealed! Photos of Phobos Monolith, Mars Moon. Featuring Buzz Aldrin. 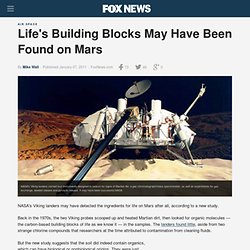 It may have been successful.NASA NASA's Viking landers may have detected the ingredients for life on Mars after all, according to a new study. Back in the 1970s, the two Viking probes scooped up and heated Martian dirt, then looked for organic molecules — the carbon-based building blocks of life as we know it — in the samples. The landers found little, aside from two strange chlorine compounds that researchers at the time attributed to contamination from cleaning fluids.

But the new study suggests that the soil did indeed contain organics, which can have biological or nonbiological origins. "This result is saying that there are organic molecules on Mars," study co-author Chris McKay, of NASA's Ames Research Center in Moffett Field, Calif., told SPACE.com. Multimedia. A team of astronomers is puzzling over an unprecedented discovery–the first ever observed asteroid with its own ring system. 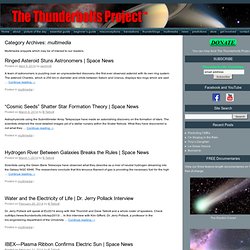 The asteroid Chariklo, which is 250 km in diameter and orbits between Saturn and Uranus, displays two rings which are said … Continue reading. Debunk This - Undeniable Proof - Mars Has Life On It.- Leaked NASA Archives Part 1. Video - Audio & Image Hosting. What's up with all the Coin like finds on Mars? Posted on Sep, 13 2010 @ 05:44 PM Originally posted by Irish Matador I really like the picture you coloured. 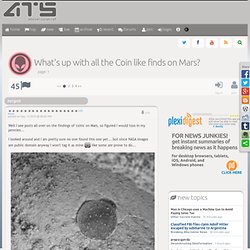 Makes it look like an authentic coin. I think I even see a face What are your own thoughts on these? Astrophysics Mars: Planet of a Thousand Mysteries. Home | About Us | Contact | Subscribe Mars: Planet of a Thousand Mysteries Mars Explained by the Electric Model Mythologist, David Talbott presents glimpses from the forthcoming DVD, "The Cosmic Thunderbolt" This clip is of the first 15 minutes of a 40 minute segment on Mars. 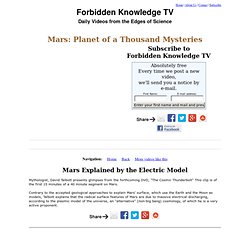 Contrary to the accepted geological approaches to explain Mars' surface, which use the Earth and the Moon as models, Talbott explains that the radical surface features of Mars are due to massive electrical discharging, according to the plasmic model of the universe, an "alternative" (non-big bang) cosmology, of which he is a very active proponent. For more Astrophysics videos, click here See the complete catalog offorbidden knowledge tv videos About Us | Privacy Policy | Contact.

Astrophysics Mars' Electric Secret: Plasma Cosmology. The Asteroid that Flattened Mars. Blue Mars « Electric Archaeology: Digital Media for Learning and Research. The topic of virtual worlds for archaeology and history seems to have hit a bit of a lull in recent months; on the other hand, that could simply be because I haven’t been looking. 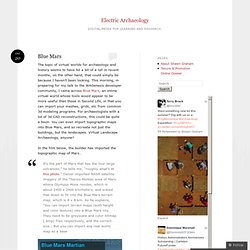 This morning, in preparing for my talk to the WAGenesis developer community, I came across Blue Mars, an online virtual world whose tools would appear to be more useful than those in Second Life, in that you can import your meshes, grids, etc from common 3d modeling programs. For archaeologists with a lot of 3d CAD reconstructions, this could be quite a boon. You can even import topographic maps into Blue Mars, and so recreate not just the buildings, but the landscapes. Virtual Landscape Archaeology, anyone? True Color Images from Mars Rovers. Posted on Nov, 18 2010 @ 05:01 PM Not sure what would give them that idea? 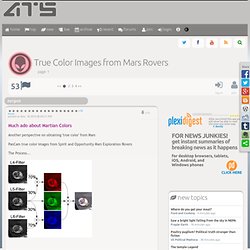 BUT having a look at the Viking below gives us a true color of the lander in Earth light for comparison. Italian Mars Enthusiast Finds New "Face" on the Red Planet. BeforeItsNews Wow this is some find ! 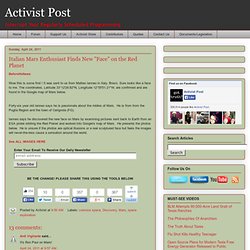 It was sent to us from Matteo Ianneo in Italy. Bravo. Sure looks like a face to me. The coordinates, Latitude 33°12'29.82"N, Longitude 12°55'51.21"W, are confirmed and are found in the Google map of Mars below. Forty-six year old Ianneo says he is passionate about the riddles of Mars.