Getting humans to Mars begins at the South Pole. Subscribe to WIRED Sending a manned mission to Mars has been the goal of national and international space agencies for decades. 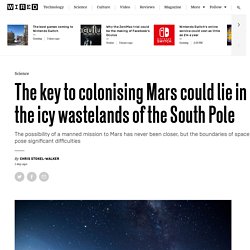 What once seemed like science fiction could become science fact, with Nasa administrator Charles Bolden saying in 2015 “we are farther down the path to sending humans to Mars than at any point in Nasa’s history”. China: We will be on Mars by the end of 2020. China's ambitious and fast-growing space program is targeting a landing on the dark side of the moon by 2018, and reaching Mars before the end of the decade. 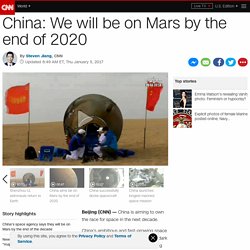 The country's space agency held a press conference on Tuesday to mark the release of a policy paper, and outlined the government's goals for exploring deep space. Wu Yanhua, deputy chief of the National Space Administration, said Beijing aims to launch its first Mars probe around 2020 to carry out orbiting and roving exploration, followed by a second mission that would include collection of surface samples from the red planet. He said other plans include sending probes to Jupiter and its moons. "Our overall goal is that, by around 2030, China will be among the major space powers of the world," he said. SpaceX Makes History. MARS SURFACE FIELD STATION - A HUMAN MISSION TO MARS CONCEPT BY NASA. Building a Future Around Mars. Human Mars Exploration Architecture Studies - DevelopSpace. 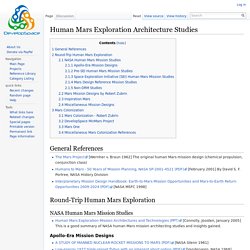 Braun 1962] The original human Mars mission design (chemical propulsion, conjunction class)Humans to Mars - 50 Years of Mission Planning, NASA SP-2001-4521 (PDF) [February 2001] By David S. F. Martian Outpost: The Challenges of Establishing a Human Settlement on Mars - Erik Seedhouse. Economic Viability of Mars Colonization. Affordable Human Missions to Mars. Robert Zubrin - Grow or Stagnate. Dr. Robert Zubrin on The Human Mission. The Case for Colonizing Mars, by Robert Zubrin. From Ad Astra July/August 1996 Mars Is The New World Among extraterrestrial bodies in our solar system, Mars is singular in that it possesses all the raw materials required to support not only life, but a new branch of human civilization. 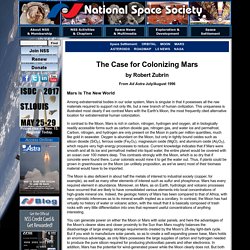 This uniqueness is illustrated most clearly if we contrast Mars with the Earth's Moon, the most frequently cited alternative location for extraterrestrial human colonization. In contrast to the Moon, Mars is rich in carbon, nitrogen, hydrogen and oxygen, all in biologically readily accessible forms such as carbon dioxide gas, nitrogen gas, and water ice and permafrost. Carbon, nitrogen, and hydrogen are only present on the Moon in parts per million quantities, much like gold in seawater. The Moon is also deficient in about half the metals of interest to industrial society (copper, for example), as well as many other elements of interest such as sulfur and phosphorus.

Interplanetary Commerce Ideas may be another possible export for Martian colonists.

Human Exploration of Mars. Mars Exploration Zones. How People Will Live On Mars [Full Documentary] COLONIZE MARS (Documentary) Explore Mars – Humans to Mars by the 2030s. What Does Colonizing Mars Look Like? Sending Humans to Mars: How Will We Do it? Chris Carberry - Explore Mars - 19th Annual International Mars Society Convention. NASA's Journey to Mars. NASA, ESA experts insist successful Mars mission decades away. Updated The race to put humans on Mars has been dealt a reality check, with experts from NASA and ESA insisting a successful mission is still decades away. 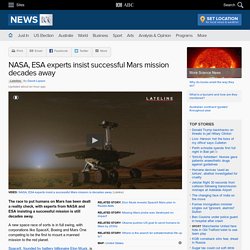 A new space race of sorts is in full swing, with corporations like SpaceX, Boeing and Mars One competing to be the first to mount a manned mission to the red planet. SpaceX, founded by battery billionaire Elon Musk, is leading the pack, with plans to send humans to Mars within eight years. Professor Mark McCaughrean, senior science adviser at the European Space Agency, said that aspiration is a stretch. "Every time people say, 'well we're going to be doing it in five or six years', they keep saying that for a while until you realise they don't have the technology in place," Professor McCaughrean said. "They don't have the money in place. Dr Abigail Allwood, a planetary scientist at the NASA Jet Propulsion Laboratory, said sending humans to Mars will take far more complex technology than is currently available. 'Feasible within 10 years' How Different Is Elon Musk's Plan From Mars Colony Visions of the Past?

A dust storm on Mars. 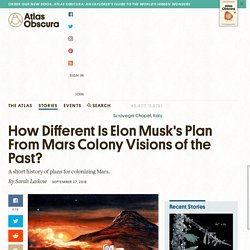 (Image: Ren Wicks/NASA/JPL-Caltech) In 2016, this is what one vision of sending humans to Mars looks like: At the 67th International Astronautical Congress, in Guadalajara, Mexico, the billionaire inventor Elon Musk gave a speech that was more anticipated than any other he’s given. Musk has an incredible talent for making people feel like humanity is on the cusp of a new future (solar power! Rad self driving cars! How Will a Human Mars Base Work? NASA's Vision in Images. To get astronauts from place to place on Mars, NASA is hoping to offer them more comfort than the simple dune buggies Apollo astronauts had on the moon in the 1970s. 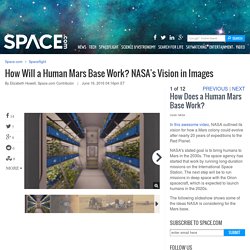 Instead, the crew will work in pressurized rovers (seen at left, during a cargo transfer) that will have a greater range. It also will allow astronauts to take off their helmets while traveling (as long as the helmets are within easy reach for emergencies). The human Mars rover is still on the drawing board, but there are a few things that NASA is trying to learn from its robotic missions. For example, the Opportunity rover has tried to climb very steep slopes on Mars. Spirit got stuck in a sand trap and eventually died in one spot. This rover appears to be solar-powered, like the Spirit and Opportunity rovers. NASA is looking for ideas that could make its Mars vehicles more affordable - The Verge. Here’s NASA’s three-step plan to colonize Mars. On Thursday, NASA released a three-step plan to bring humans to Mars sometime in 2030. 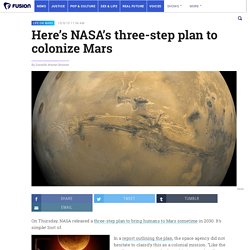 It’s simple! Sort of. In a report outlining the plan, the space agency did not hesitate to classify this as a colonial mission. “Like the Apollo Program, we embark on this journey for all humanity,” NASA noted, adding, “Unlike Apollo,we will be going to stay… We are developing the capabilities necessary to get there, land there, and live there.” The agency’s recent confirmation that there is liquid water on Mars is a good thing for those who want to set up camp on the red planet, but it doesn’t mean living on Mars will be easy. But NASA isn’t stepping away from the goal of a manned mission, and it sees three phases on the path to achieving it. Earth Reliant exploration is focused on research aboard the ISS. Nasa planning ‘Earth Independent’ Mars colony by 2030s.

Nasa-mars-colony-a-long-way-down-the-road-1771100911.amp. NEW!!! Manned Mission to Mars ( Mars Direct variant) Concept. National Geographic Documentary - Mars Underground Space Station on Mars - Documentary 2015 Full H. The Exploration and Colonization of Mars: Why Mars? Why Humans? Colonization of Mars. An artist's conception of a human Mars base, with a cutaway revealing an interior horticultural area Mars is the focus of much scientific study about possible human colonization. 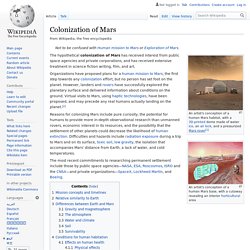 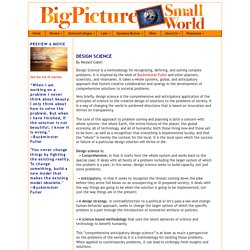 It is inspired by the work of Buckminster Fuller and other planners, scientists, and visionaries. It takes a whole systems, global, and anticipatory approach that fosters creative collaboration and synergy in the development of comprehensive solutions to societal problems. Very briefly, design science is the comprehensive and anticipatory application of the principles of science to the creative design of solutions to the problems of society. It is a way of changing the world in preferred directions that is based on innovation and thrives on transparency. Design science is: • Comprehensive, in that it starts from the whole system and works back to the special case; it deals with all facets of a problem including the larger system of which the problem is a part; in this sense, design science seeks to build capacity, not just solve problems; The Buckminster Fuller Institute. MaslowAndHomestead. Fisher’s Martian Life Support Hierarchy. Will Mars Be a World Without Laws?

Even then, when bankers, insurance companies, and private investors calculate the expected risk and return of outer-space business endeavors, including Moon and Mars exploration projects and proposed settlements, they will probably be less than sanguine about the early prospects. The exorbitant cost of launches-currently running as much as $10,000 for each pound placed in orbit-and the need for a basic infrastructure to support life and industrialization in outer space are just two of the more salient near-term deterrents to outer-space commerce.

Furthermore, in this stage of space exploration, only governments have the launch vehicles and only governments approve astronauts to fly in space. . C.E. Projects. . . . Robert Zubrin - On the Way to Starflight Economics of Interstellar Breakout. Kent Nebergall - Modern Space Economy - 19th Annual International Mars Society Convention.

There is even evidence to suggest it may one day happen. Human missions / New Mars Forums. First Steps. New home When the colonists will arrive to Mars, they will have one fully prepared living complex, that will be constructed using system, that automatically deploy the inflatable habitats, solar panels, lifesupport, communication and other systems before manned expedition. After arriving to the base, crew will spend from few days to couple of weeks in adaptation period. In that time they will do all needed tests and preparations for deploying of habitat extension. A Mars Colony – A Tentative Technical Analysis. (by Richard Heidmann, vice-president, Association Planète Mars (French chapter of The Mars Society). English translation by Pierre Brisson) This report, written for the benefit of association Prospective 2100, was published (in French) in 2008 on the website of Association Planète Mars, the French branch of The Mars Society.

During the seven years that have elapsed since then, a number of significant elements emerged that warrant reconsidering some aspects of the study, particularly the following points. Kent Nerbergall - Space Settlement Laboratory - 19th Annual International Mars Society Convention. Assigns Mars Mission to Community College Students. MARS COLONY DEVELOPMENT USING SIMPLE STRUCTURE & PROCESS. The Mars Colony Administrator’s Handbook – Part 1 – Lichtman Consulting. When Elon Musk announced that he wanted to plant a colony of 80,000 people on Mars in his lifetime, a few thoughts went through my head in (roughly) this order: That’s an awfully long supply chain if things go wrongSomebody is going to be responsible for administering the whole thingThat has to be the toughest job in historyThey’ll need to be solar-class experts in many areas, or able to learn them in a hurryThere ought to be a handbook for this sort of thing Obviously, it would more closely resemble a library, rather than a “For Dummies” type book.

Equally obviously, there would be a large team responsible, with many kinds of experts engaged in their own particular specialties. Somebody would ultimately be responsible though. Call them the CEO. I’m not qualified in the least to write an opus of this magnitude, but maybe (with some small amount of hubris, perhaps) I could write the introduction. 1511. The Mars Colony Administrator’s Handbook – Part 7 – Lichtman Consulting. Ecliptic Background: Martian Independence. Problem loading page. National Geographic Documentary - Mars Underground Space Station on Mars - Documentary 2015 Full H. The Human Exploration of Mars. Constructing a human mission, a tonne at a time / Human missions / New Mars Forums. I typically do not post to this section, but I felt like it this time.

Terraformer opened up the topic with: Anyway, back on topic... what can we do with 1 tonne chunks? I've already mentioned the construction shack idea. Could we assemble large probes, fuel them up, and send them on their way? Welcome to Mars. Space Settlement Nexus Sitemap. Man On Mars Mission To The Red Planet - BBC Documentary. Red Colony - Colonizing and Terraforming Mars. The Mars Millennium Project 2030 - Artists, Scientists, Engineers and Astronauts. Open Source Ecology. Colonizing our Next Frontier. Space Settlement Lab MSC 2016 Kent Nebergall. Space Exploration is the Worst. The next quantum leap. Living on Mars - A Beginner's Guide. A life on mars.