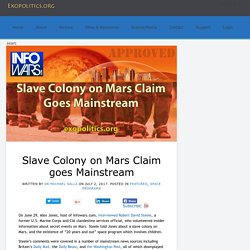 Posted in Featured, Space Programs On June 29, Alex Jones, host of Infowars.com, interviewed Robert David Steele, a former U.S. Marine Corps and CIA clandestine services official, who volunteered insider information about secret events on Mars. Steele told Jones about a slave colony on Mars, and the existence of “20 years and out” space program which involves children. Steele’s comments were covered in a number of mainstream news sources including Britain’s Daily Mail, the Daily Beast, and the Washington Post, all of which downplayed his comments as mere conspiracy theory. Steele reached the rank of Major for the USMC Reserves, Intelligence, from 1976 to 1996, and during this period also worked with the CIA clandestine services (1979-1988). NASA Scientist Finds Strong Evidence for an ET Race Existing on Mars Half A Billion Years Ago – Collective Evolution. 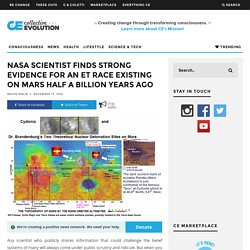 We need your help. Any scientist who publicly shares information that could challenge the belief systems of many will always come under public scrutiny and ridicule. But when you worked on space plasma technologies, nuclear fusion, and advanced space propulsion, and invented the Microwave Electro-Thermal plasma thruster using water propellant for space propulsion, people are probably going to take you seriously. This is the case with Dr.

John Brandenburg and, apart from what’s listed above, he has also worked for the Government with top-secret security clearances on various projects. Brandenburg was also the Deputy Manager of the Clementine Mission to the Moon, which was part of a joint space project between the Ballistic Missile Defence Organization (BMDO) and NASA. He currently works as a consultant to Morningstar Applied Physics. It’s up to you to make your own conclusions from the information that’s available. According To Brandenburg. Boy Remembers His Past As An Extraterrestrial Being & Provides Startling Details. You might not know it, but children remembering their past lives is nothing new. 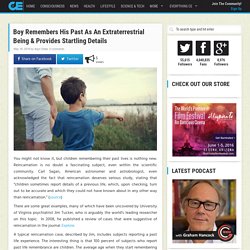 Reincarnation is no doubt a fascinating subject, even within the scientific community. Carl Sagan, American astronomer and astrobiologist, even acknowledged the fact that reincarnation deserves serious study, stating that “children sometimes report details of a previous life, which, upon checking, turn out to be accurate and which they could not have known about in any other way than reincarnation.” (source) Dr John Brandenburg - Secret Space Program. About DR. 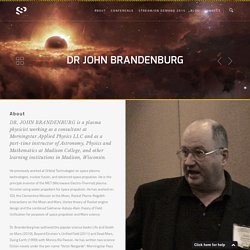 JOHN BRANDENBURG is a plasma physicist working as a consultant at Morningstar Applied Physics LLC and as a part-time instructor of Astronomy, Physics and Mathematics at Madison College, and other learning institutions in Madison, Wisconsin. He previously worked at Orbital Technologies on space plasma technologies, nuclear fusion, and advanced space propulsion. He is the principle inventor of the MET (Microwave Electro-Thermal) plasma thruster using water propellant for space propulsion. He has worked on: SDI, the Clementine Mission to the Moon, Rocket Plume-Regolith Interactions on the Moon and Mars, Vortex theory of Rocket engine design and the combined Sakharov-Kaluza-Klein theory of Field Unification for purposes of space propulsion and Mars science.

Dr. Odd ‘Woman-Shaped Figure’ Spotted On Mars? NASA’s Curiosity rover has beamed back a picture from the surface of Mars that UFO watchers assert shows the form of “a woman partly cloaked,” further proof in their eyes of the existence of intelligent life on the Red Planet. 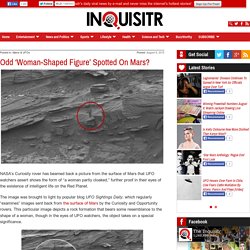 The image was brought to light by popular blog UFO Sightings Daily, which regularly “examines” images sent back from the surface of Mars by the Curiosity and Opportunity rovers. This particular image depicts a rock formation that bears some resemblance to the shape of a woman, though in the eyes of UFO watchers, the object takes on a special significance. “The woman seems to have breasts…indicated by the shadow on its chest,” UFO Sightings Daily‘s Scott Waring wrote. “We also see two arms that are lighter in color and what looks like a head with long hair.

US Soldier Claims He Has Spent 17 Years Battling Aliens on Mars. (Before It's News) A former US Marine has claimed he spent 17 years of his career on MARS. 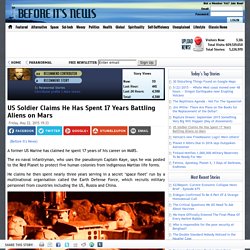 The ex-naval infantryman, who uses the pseudonym Captain Kaye, says he was posted to the Red Planet to protect five human colonies from indigenous Martian life forms. He claims he then spent nearly three years serving in a secret ‘space fleet’ run by a multinational organisation called the Earth Defense Force, which recruits military personnel from countries including the US, Russia and China. Captain Kaye’s testimony reveals that the main human colony on Mars is called Aries Prime which is located inside a crater.

Aries Prime serves as the headquarters for the Mars Colony Corporation. In testimony released to ExoNews TV, Captain Kaye said he was trained to fly three different types of space fighters and three bombers. The truth about Mars is derived from, but not at NASA . It's here and at MarsCorrect.Com. Nuc on Mars? By John Brandon, published April 01, 2011 by FoxNews.com Ever wonder why the red planet is red? 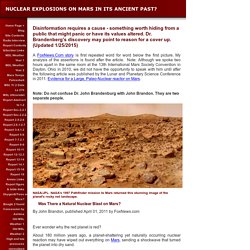 About 180 million years ago, a planet-shattering yet naturally occurring nuclear reaction may have wiped out everything on Mars, sending a shockwave that turned the planet into dry sand. Even more incredible: A natural nuclear reaction could have occurred on our own planet -- and could happen again, said Dr. John Brandenburg, a senior propulsion scientist at Orbital Technologies Corp. "The Martian surface is covered with a thin layer of radioactive substances including uranium, thorium and radioactive potassium -- and this pattern radiates from a hot spot [on Mars],” Brandenburg told FoxNews.com. “A nuclear explosion could have sent debris all around the planet," he said. According to Brandenburg, the natural explosion, the equivalent of 1 million one-megaton hydrogen bombs, occurred in the northern Mare Acidalium region of Mars where there is a heavy concentration of radioactivity.

Dr. Dr. Were Ancient Martians Murdered by Nuclear Bomb-Dropping Aliens? An Investigation. As far as we can tell, Mars is a desolate-looking desert, with no obvious life. 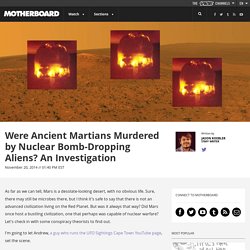 Sure, there may still be microbes there, but I think it's safe to say that there is not an advanced civilization living on the Red Planet. But was it always that way? Did Mars once host a bustling civilization, one that perhaps was capable of nuclear warfare? Let's check in with some conspiracy theorists to find out. I'm going to let Andrew, a guy who runs the UFO Sightings Cape Town YouTube page, set the scene. Physicist Claims Evidence Ancient Nuclear Explosions Ended Life On Mars.

A plasma physicist is advancing a theory in which he claims to have evidence of two ancient nuclear explosions on Mars, events that he believes wiped out an ancient civilization on the red planet. 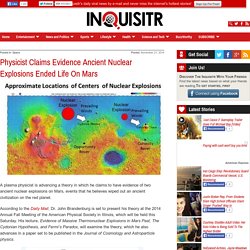 As Earthlings struggle for power and the new arms race has become a race to stop neighboring countries from owning nuclear power, have you ever thought about the future of the Earth and its inhabitants? 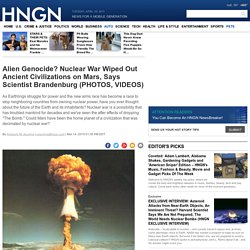 Paranormal Crucible. NASA Witness Sees Guys Walk Over to Viking lander on Mars! (Before It's News) What on Earth is NASA hiding on Mars from the public? “John Lear is the son of the famous inventor of the Lear Jet. He is a Lockheed L-1011 Captain and is highly regarded in aviation circles. He has flown over 150 test aircraft and has won every award granted by the Federal Aviation Administration. John also holds 18 world speed records and has worked for 28 different Aircraft Corporations. John Lear stated that we have been to Mars since the 1960’s, which he stated here in this short sound bite: A woman names Jackie calls in from north of Las Vegas. When NASA landed the Curiosity Rover, CNN does a story on it where the newscaster states that these are the most true in color images of Mars to date.