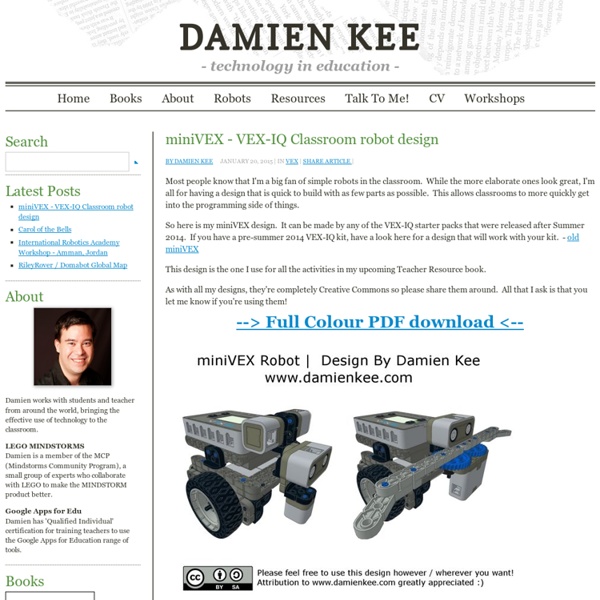 At a recent conference I ran an advanced EV3 workshop where one activity concentrated specifically on the use of arrays. Arrays are a new edition the MINDSTORMS software that the previous NXT-G software didn't support (at least not cleanly). Arrays allow us to store multiple bits of data all in the one 'thing', which makes it easier to access. If you think of Variables as being a suitcase where you can read and write some information, then Arrays can be thought of as a suitcase that has lots of smaller folders inside. Each folder can store an individual piece of information and you can access that information but selecting suitcase, and then the folder inside. While you can do the same thing with lots and lots of Variables, Arrays make it far cleaner.

LEGO NXT Resources 'Robotics in Education' mailing list This mailing list for teachers provides a forum for discussion into the issues facing robotics in the classroom. This list also provides a means to ask and answer questions from fellow teachers around the world. ME Program Upload damienkee.com Subscription preferences Build a Catapult (Lesson Courtesy the Cornell Center for Materials Research (CCMR). Level: Grades 5-12. Group size: 2-4 students. Time Required: Two or three 60-minute class periods. Lesson PDF. Free Lego NXT MindStorms NXT-G Robotics Challenges Tutorials At the request of Tasmanian teachers Miss Clare Neilson and recently retired Mrs. Juanita Airey, activities using Lego's NXT 1 MindStorms Robots have been developed for use in School-based 2-hour sessions. Some, but not all, will work with the new NXT 2 kit (click here for more information). The tutorials are presented as a series of Challenges, which are gradually being converted for Web use. Challenges with an "M" after the challenge number include mentor notes. Challenge numbers greater than 100 use components that are not in the NXT 1.0 Retail or Educational Lego kits, but are available for separate purchase.

Digital STEAM Workshop Let’s say your little brother wants to ride a bike like you, but yours is too big for him to reach the pedals. He needs a smaller bike without pedals that’s easy for a preschooler to ride, but stable enough that he doesn’t lose balance when he’s moving fast. With this product design challenge, you can create a toddler’s balance bike that meets your little brother’s need for speed—without causing any playground accidents. Get creative with design in class MEM-380/800 Mechatronics 2 Web Page Documents are posted as Adobe PDF files which are viewable with Acrobat Reader paul@coe.drexel.edu Week 01 - 01/09/12 Handouts Simple Machines: Wheel and Axel Tutorial Simple machines make our lives easier by allowing us to do tasks with less force. The mechanical advantage is the factor of which a machine multiplies the force put into it. For example, if a simple machine has a mechanical advantage of 3 it means that it made the work you did 3 times easier or you only had to put in 1/3 the force you would have if you didn’t have the simple machine. An example of a simple machine is the wheel and axle. The wheel and axle allows movement of larger objects over a distance with less force.

Rideable Segway Clone - Low Cost and Easy Build This Instructable will show you how to build a ride-able Segway clone. Here are its features: Easy to build with no welding, no complicated steering linkage and minimal soldering. Uses a readily available $3 digital MPU6050 accelerometer/gyro IMU board. Total parts cost is under $400 (including shipping). Roborealm Full License RoboRealm® is an application for use in computer vision, image analysis, and robotic vision systems. Using an easy point and click interface RoboRealm simplifies vision programming! Using an inexpensive USB webcam and the PC you already have you can now add machine vision to your robotic projects! Image and/or video processing can be technically difficult. Home robots are continuously moving towards PC based systems (laptop, netbook, embedded, etc.) that have the power to support complex image processing functions.

FREE Science Lesson Plan – Plant Growth This week’s FREE Science Lesson Plan is about Plant Growth – download the lesson plan here. Develop pupils’ understanding of how a plant tracks the sun’s movement across the sky. Evaluate the light levels in the room, then program a robot to react to different light levels and replicate the movements of a plant throughout the day. Measure the amount of light absorbed at different times and control the speed of the turn to track the light efficiently. Aerial ropeways: automatic cargo transport for a bargain Before we start, it is important to note that aerial ropeways (also known as aerial tramways or cableways) can be divided in two groups: monocable and bicable mechanisms. In a monocable system, one endless rope serves to both support and move the carriers in transit. In a bicable (or tricable) system, separate ropes sustain these functions: one or two static support ropes, the "carrying ropes" or "track cables", and one or two light travelling "haul ropes". Ancient and medieval ropeways were of both variety, while modern ropeways (from the 1850s onwards) were initially exclusively monocable systems. Later, bicable systems took over almost completely. At the end of the 19th century, both ropeway methods were also applied to canal transportation (see the article on trolley canal boats), with monocable systems used for cable trains.

Hacking the Lego NXT - Part 1 Before we start with this slightly tangential series of posts, let me give a word of advice to those who saw the word “hacking” in the title and immediately thought, “HE IS GOING TO HACK INTO SECRET FILES!”. Firstly, any democracy should not have secret files, but that’s for another post, and secondly, “hacking” is what I define as a skillset: the ability to alter the main function of something, be it hardware or software, to suit what you want to do with it. Henry Dyer (@Direthoughts) did a nice piece of hacking, for example, on those Apple Store iPads. It has been the media convincing people that hacking is bad, when in fact, only a small proportion hack with malicious intent.