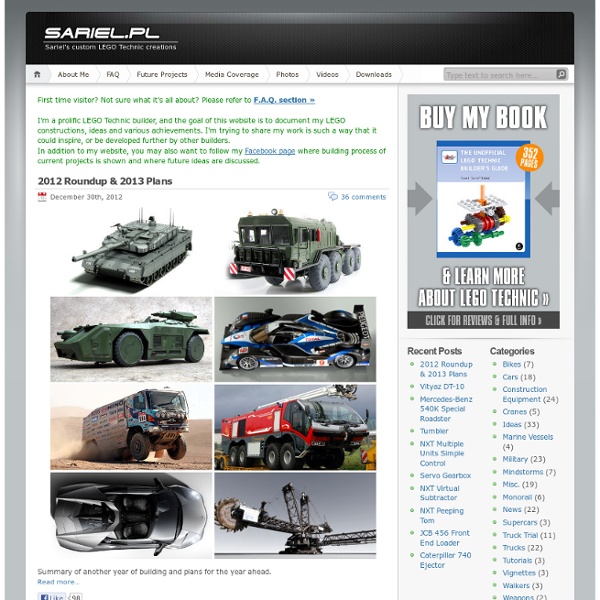 TechnicBRICKs www.dennisbosman.nl Scale models of LEGO Welcome on my website! Since the mid nineties I mainly build scale models of trucks. During that days people get familiar with my work via Truckstar Magazine in which my models were shown quite often. After some time you're starting to put more detail in each new model and you're looking for new challenges. NEW: "The Art of LEGO Scale Modeling" And that resulted in a nice book: "The Art of LEGO Scale Modeling". Were it all started This hobby started years ago when I got into the transport world via my father's job. From the nineties I started to build models on a larger scale: 1:13. A few times a year I show my LEGO models to the visitors during several events togehter with collegue modellers. Enjoy watching! Dennis Bosman

Cypr-21's Lego Construction Site - Original Technic Models by Jennifer Clark Crowkillers Dash Switch that lets you select either Rear Wheel and All Wheel Drive New Styled All Wheel Drive 5 Speed Transmission with Reverse Working Hand of God Steering with remote cockpit steering 4 Wheel Independent Suspension Turning a Small Bevel Gear in the rear will Open and Close Each Door Opening Hood and Rear Hatch The Vampire GT... A car that I have been pondering over for the past few years... I knew that this one had to be different from anything that I had done before. It had to have Gull-wing doors, it had to be black, and it had to have a menacing front fascia. During the build of the transmission, I knew that all wheel drive was the next step with it, after that I incorporated a switch on the dash that takes the car from rear wheel drive to all wheel drive. Which started by building a second all wheel drive chassis completely in Red. Each door can be opened and closed by turning a small bevel gear located in the rear of the car. Update 11-11-2013 Update 5-26-2012

Lego Technic et Lego Star Wars sur SeTechnic laixEngineering Jurgens Technic Corner - Home neil everett The Caterham Seven is a classic British sports car. It is based around the original design of the Lotus Seven, which ended production many years ago. Caterham have made modifications to the design over the years, but it remains closely related to the original Lotus design. Colin Chapman, the late founder of Lotus Cars, believed stongly in the principle of keeping his cars as light and as simple as possible. The Seven is perhaps the most extreme interpretation of this concept. Few cars in recent years have come close to the lightness of the Seven, with the main exception being Lotus' own Elise. The Caterham 7 lends itself very well to being modelled in Lego. However, certain features do cause problems for the Lego replica. I was greatly assisted in the construction of the model by my two recent Lego purchases, my first new Lego models in around ten years. Further details of the Caterham model can be found using the navigation bar at the foot of the page.

Sheepo's Garage The Brothers Brick | LEGO Blog | LEGO news, custom creations, MOCs, set reviews, and more! CarsParadise ^My collection. Welcome! Hi and welcome to my page... My Favorite own Creation(s) These two in my opinion are my best from all of my own creations By the way the Shelby Super snake has made it at - LMALradio #72 - 2008 in Review; as one of the best LEGO creations in the year 2008! My creations world wide: My LEGO models have been featured on a lot of websites and blogs world wide, from LEGO blogs to famous car sites and magazines, here're some of them: - Topgear.com Yes you read right; my creations have made it to the very famous car lovers website on the BBC; Topgear.com Full story here - Jalopnik.com A vey famous car site, probably right after Topgear. - Autoblog.com A well known car site, I personaly like it a lot! MOTD MOC Of The Day: One of the greatest feelings in the world; to wake up some day, checking your favorite site, and find one of your creations featured at the main page as a MOTD, it's your happy day :) "BRICKSonWHEELS" Make sure to visit our club:

Texbrick Demag CC5800 Written by TJ on January 23rd, 2014 The big crane project that I’ve had going for years now is a 1:17 scale model of a Demag CC5800. I’ve slowly worked on this beast over a period of 2 years or more, but I’ve yet to finish it. A lot of the work has been to procure the massive amount of parts needed. To date I’ve finished the turntable, one crawler, and the base frame of the superstructure. I hate new year’s resolutions, but I am going to push myself to get this project done this year. The crawler design was one of the challenges, but I think I’ve got a working design now. Avery Family Interview Written by TJ on September 10th, 2013 A few months ago we were interviewed by a local radio station. The following link has the audio clip that aired as well as a photos that were taken during the interview. www.houstonmatters.org/segments/segment-e/2013/05/17/all-things-lego-in-houston Sci-Fi Rocket I recently helped build a rather large model of a classic science fiction rocket. New Crane