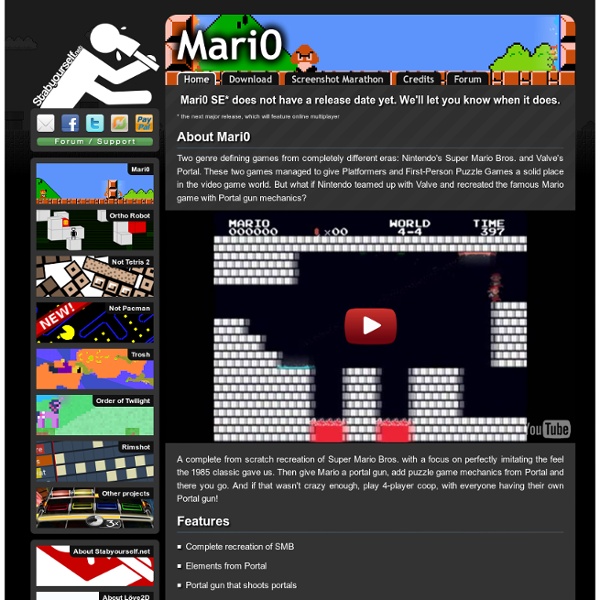 Video Galleries : Zero Punctuation Zero Punctuation is The Escapist's groundbreaking video review series starring Ben "Yahtzee" Croshaw. Every Wednesday Zero Punctuation picks apart the games so you don't have to. Called "hilariously cutting ... first legitimate breakout hit from the gaming community in recent memory" by Boing Boing, see why gamers love it and developers fear it. South Park: The Stick of Truth - Yes, There Really Were Crying Koalas English Freedom and privacy on the internet are under threat, with far-reaching consequences for the daily lives of millions of internet users. Their data are being collected ever more frequently and for an ever longer period. Their access to websites can be blocked. It is even being proposed to cut off users from the internet altogether. The coming years are decisive for the future of privacy and freedom on the internet. Bits of Freedom stands up for your freedom and privacy on the internet. > > Read our English blog posts here The organisation Bits of Freedom was active between 2000 and 2006 and resumed its activities in August 2009, when a substantial initial grant by the Dutch foundation Internet4All allowed Bits of Freedom to breathe new life into its defense of civil rights in the information society. Support Bits of Freedom We are grateful for every personal donation that helps Bits of Freedom.

Wikka: Welcome to WikkaWiki So long, and thanks for all the fish It is with a heavy heart that I am announcing the end-of-life for WikkaWiki. I have been an active developer with the project for 15 years, and am currently the last of the original devs. Currently, Dario (one of our early visionaries) maintains ownership of the wikkawiki.org domain; I host the various websites. I've truly enjoyed this journey, and I don't consider this the end, but the beginning of some new journey I've not yet realized. Welcome to WikkaWiki WikkaWiki is a flexible, standards-compliant and lightweight wiki engine written in PHP, which uses MySQL to store pages. Features: things you can do with Wikka. Quick help Installing Upgrading Migrating from WakkaWiki Troubleshooting Documentation Need help? Support If you need support with Wikka or to get in touch with the Developer Team you can: Submit an issue on GitHub Subscribe to our mailing-lists Plugins and extensions Several user-contributed extensions are available for downloading. Syndicate

Free-to-Play One of the most popular online action games of all time, Team Fortress 2 delivers constant updates—new game modes, maps, equipment and, most importantly, hats. Nine distinct classes provide a broad range of tactical abilities and personalities, and lend themselves to a variety of player skills. Meet the team > No matter what your style and experience, we've got a character for you. Detailed training and offline practice modes will help you hone your skills before jumping into one of TF2's many game modes, including Capture the Flag, Control Point, Payload, Arena, King of the Hill and more. There are hundreds of weapons, hats and more to collect, craft, buy and trade.

home Team Fortress 2 - Free to Play - Source (PC) What do I need to know about Team Fortress 2 Free to Play? For new players: Q. Who has a free account? Anyone who has downloaded the game for free and has not made a purchase in the in-game Mann Co. Q. If you've ever spent money on Team Fortress 2, you have a premium account. Q. Premium accounts have a few extra features including access to rare and cosmetic items through random item drops, the ability to store items in your backpack, and more powerful trading and crafting abilities. Account Comparison: Q. The entire game can be played without making a purchase. Q. Install Steam, download Team Fortress 2, and play! Q. Yes. Q. Make any purchase of any amount in the in-game Mann Co. Q. No, there are no upfront obligations to download and play Team Fortress 2 for free. Q. The finest virtual item store in the world, easily accessible from within the Team Fortress 2 game client. Q. Check the Team Fortress 2 game page for Mac and PC requirements. Q. Q. For existing players: Q. It doesn't. Q. Q.

/us « SteamPrices.com BrowserQuest Hachimaki army BrowserQuest/server at master · mozilla/BrowserQuest Homefront Soundtrack review - PC Sumthing Else Music sent over the Homefront soundtrack for us to check out. The game, from THQ and developer Kaos Studios, is now available and I thought I would squeeze off this review. The Homefront soundtrack starts off with Stand your Ground from Matthew Harwood and Scott Cresswell. Cresswell did the vocals, guitar and bass on the song and it reminds me of a slightly updated version of the 80’s Transformers film soundtrack. From there the soundtrack moves on to 33 orchestrated tracks and range from tense, percussive, incidental music pieces to grander sounding pieces with prominent horns and strings and slower more emotion-provoking compositions. Back Yards , track 14, reminded me of a tune you would expect to hear as covert forces were moving into place as they set up for an attack against entrenched, superior odds. Take the Shot opens with a helicopter like sound and then quickly descends into a heartbeat like ambient piece.