Envisioning emerging technology for 2012 and beyond (by Michell Zappa) 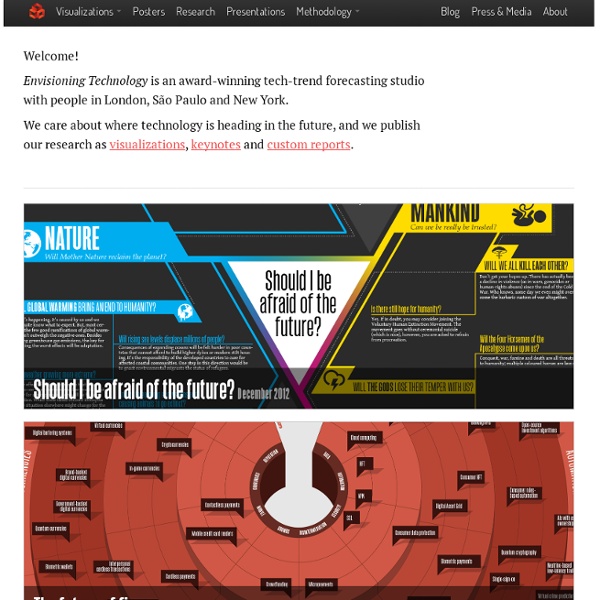 Limits to Growth was right. New research shows we're nearing collapse The 1972 book Limits to Growth, which predicted our civilisation would probably collapse some time this century, has been criticised as doomsday fantasy since it was published. Back in 2002, self-styled environmental expert Bjorn Lomborg consigned it to the “dustbin of history”. It doesn’t belong there. Research from the University of Melbourne has found the book’s forecasts are accurate, 40 years on. If we continue to track in line with the book’s scenario, expect the early stages of global collapse to start appearing soon. Limits to Growth was commissioned by a think tank called the Club of Rome.

An Interactive Infographic Maps The Future Of Emerging Technology Can speculation about the future of technology serve as a measuring stick for what we create today? That’s the idea behind Envisioning Technology's massive infographic (PDF), which maps the future of emerging technologies on a loose timeline between now and 2040. Click to enlarge. On it you’ll find predictions about everything from artificial intelligence and robotics to geoengineering and energy. Mouse over the entries for blurbs describing them and links to more information; you won’t find much more than a Wikipedia page explanation, but that’s plenty helpful for the uninitiated. In 30 years, it will also be a great reference for where we thought we might end up.

Wonderfully Textured Website Designs inShare3 Texture is a great way to add some visual interest to a design and give it that extra spark. Depending on the choice of texture, it can also add some character to the design as well, so it’s important to choose appropriate textures that match the style of the company. We love using texture at Snoack Studios and wanted to highlight some really great uses of texture in web design today. Should I Be Afraid of the Future? About Geophysical disasters, global warming, robot uprising, zombie apocalypse, overpopulation and last but not least the end of the Mayan calendar... humanity faces many threats! Will we survive the end of this year? And if we do, what's next lurking around the corner? What is science fiction, what is science fact?

20 Inspirational Flash like websites that uses Javascript 20, ajax, flash, functions, javascript, jquery, List, mootools, roundup, scroll effect, showcase, websites Today I have a made a roundup of 20 Inspirational Flash like websites that uses Javascript functionality as it main source of website functional instead of flash. Click on some of the website and check out some of the cool effects. Enjoy! Popular Front World of Merix

The End of History? The short, strange era of human civilization would appear to be drawing to a close. The likely end of the era of civilization is foreshadowed in a new draft report by the Intergovernmental Panel on Climate Change (IPCC), the generally conservative monitor of what is happening to the physical world. It is not pleasant to contemplate the thoughts that must be passing through the mind of the Owl of Minerva as the dusk falls and she undertakes the task of interpreting the era of human civilization, which may now be approaching its inglorious end. The era opened almost 10,000 years ago in the Fertile Crescent, stretching from the lands of the Tigris and Euphrates, through Phoenicia on the eastern coast of the Mediterranean to the Nile Valley, and from there to Greece and beyond.

Data Mining Image: Detail of sliced visualization of thirty video samples of Downfall remixes. See actual visualization below. As part of my post doctoral research for The Department of Information Science and Media Studies at the University of Bergen, Norway, I am using cultural analytics techniques to analyze YouTube video remixes. My research is done in collaboration with the Software Studies Lab at the University of California, San Diego. A big thank you to CRCA at Calit2 for providing a space for daily work during my stays in San Diego. The following is an excerpt from an upcoming paper titled, “Modular Complexity and Remix: The Collapse of Time and Space into Search,” to be published in the peer review journal AnthroVision, Vol 1.1.

Sketch2Photo Abstract: We present a system that composes a realistic picture from a simple freehand sketch annotated with text labels. The composed picture is generated by seamlessly stitching several photographs in agreement with the sketch and text labels; these are found by searching the Internet. Evolution's Arrow Evolution’s Arrow uses the methods, tools and findings of science to demonstrate that the evolution of life is directional. Evolution is not an aimless and random process, it is headed somewhere. This has significant implications for humanity. Whenever life emerges on any planet, two great evolutionary trends begin. The first trend is towards the formation of cooperative organizations of greater and greater scale. Interactive Experiments Focused on HTML5 Device Loop Animation View the device loop A device loop animation that I created for the new slid.es home page. Flexing Pagination

26 ideas from the future “One of the things about learning how to read — we have been doing a lot of consuming of information through our eyes and so on — that may be a very inefficient channel. So my prediction is that we’re going to ingest information. You’re going to swallow a pill and know English.