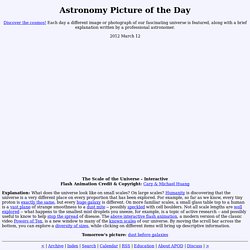 Untitled. How Famous Companies Got Their Names. Ever wondered about how famous brands got their names from?

Here are a couple of explanations. Via. The Endicott Studio Journal of Mythic Arts, Summer 2003. The Quick 10: 10 Things You Probably Didn’t Know About <em>Harry Potter</em> With Harry Potter and the Half Blood Prince coming out in the U.S. later this week, it's time to out myself as a Slytherin Supporter. Maybe you already knew that. Nothing against Gryffindors - I'm no Voldemort or anything - but I always tend to like the villains a little more than the do-gooders. To celebrate Harry and Co.'s sixth movie (and sixth book), here are a few facts that you may not have known about the gang in gold and red (and maybe a couple about the set in silver and green). 1. It has a sour tone to it, doesn't it? 3. 4. 5. 7. 8. 9. There's obviously a ridiculous amount of Harry Potter trivia out there, and since Harry Potter fever is about to sweep the world again, we might as well share it. 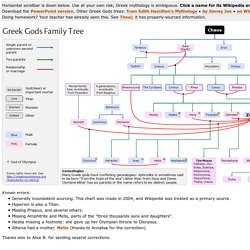 Family tree of the Greek gods - Wikipedia, the free encyclopedia - StumbleUpon. Key: The essential Olympians' names are given in bold font.

See also List of Greek mythological figures Notes External links Media related to Family trees of Greek mythology at Wikimedia Commons. 13 Things About Your Childhood You Never Realized That Will Blow Your Mind. Hawaiians Top 'Happiness' Survey (Infographic) The Aloha State seems to be having all the fun! 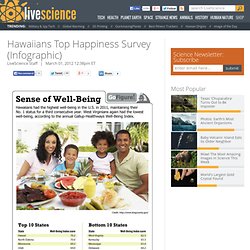 And that's for a third year in a row, according to the Gallup Healthways Well-Being Index. The 2011 telephone survey was carried out between Jan. 2 and Dec. 29, 2011 and included a random sample of 353,492 adults, ages 18 and older, living in all 50 U.S. states and the District of Columbia. To understand state well-being, Gallup relied on six measures: life evaluation (self-evaluation about your present life situation and anticipated one in five years); emotional health; work environment (such as job satisfaction); physical health; healthy behavior; and basic access (access to health care, a doctor, a safe place to exercise and walk, and community satisfaction).

Results showed that Hawaiians were the most likely to say they smiled or laughed a lot "yesterday," and the least likely residents to report daily worry or stress, or depression. Embed: Paste the code below into your site. 14 fun and odd facts you probably didn’t know. A12-week-old macaque – who was abandoned by his mother – was close to death when it was rescued on Neilingding Island, in Goangdong Province. 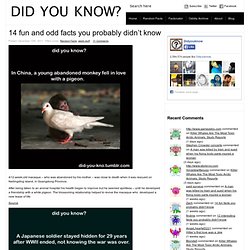 After being taken to an animal hospital his health began to improve but he seemed spiritless – until he developed a friendship with a white pigeon. The blossoming relationship helped to revive the macaque who developed a new lease of life. Source Source Can you see it? 14 fun facts you probably didn’t know. Source Source Source Some other swear slangs were FLOGGING CULLY. 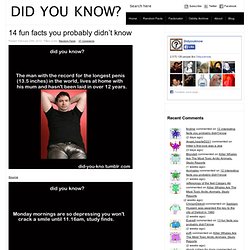 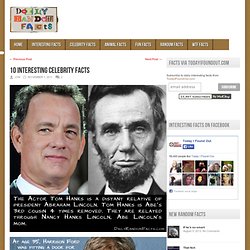