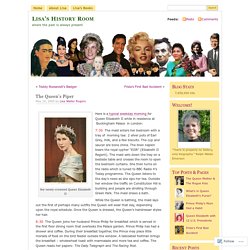 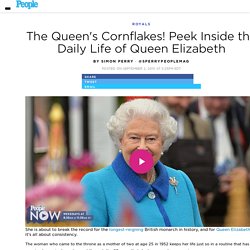 Escape will cancel and close the window. Daily Routines: English Language. Present Simple - The Daily Routine of the Queen. What does the Queen ACTUALLY do all day? This is her daily routine. The Queen is attracting plenty of social media attention these days, with rumours swirling regarding her supposed ill-health. 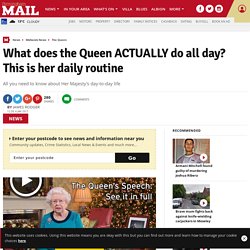 Her Majesty delayed her festive trip to Sandringham last month. And Queen Elizabeth failed to appear for a New Year's Day service at her estate. And the social media mutterings reached fever pitch when a fake BBC News account duped scores of people with a fake report of her death. A Day In The Life Of Her Majesty Queen Elizabeth II. The remarkable thing about Queen Elizabeth’s reign, from the young age of 25, is that she is the first Monarch to experience the amazing amount of change throughout her Reign. 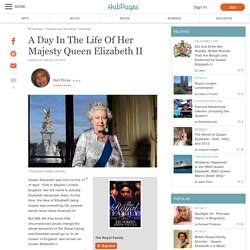 No other King or Queen in history has actually come anywhere near to achieving the things that she has. For example, she has seen so much more of the World than any other Monarch. With the invention of the Airplane, Television and of course the Internet, the Queen has been seen, and heard by Millions of people around the World. It’s amazing to think that the Monarchy has managed to change and adapt to modern life. Considering how the Royal family over the centuries have always kept to a strict regime of work, with an aloofness towards the general public. Who would think that the Royal Grandchildren, William and Harry especially, would go overseas on Royal visits, only to join in playing cricket with the locals, hug the children, and laugh along with the dignitaries of many countries?

Princess Diana. A Day In The Life Of The Queen. Fancy living at Buckingham Palace and being paid £17,000? This is the job for you. 15 Banknotes that Show Queen Elizabeth Age from a Child to an Elderly Woman. Born 21 April 1926, Queen Elizabeth II is the longest-lived and second longest-reigning British Monarch. 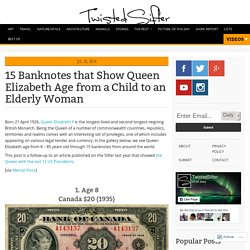 Being the Queen of a number of commonwealth countries, republics, territories and realms comes with an interesting set of privileges, one of which includes appearing on various legal tender and currency. In the gallery below, we see Queen Elizabeth age from 8 – 85 years old through 15 banknotes from around the world. This post is a follow-up to an article published on the Sifter last year that showed the Queen with the last 12 US Presidents. [via Mental Floss] 1. 2. 3. 4. 5. 6. 7. 8. 9. 10. 11. 12. L A D Y B I R D: Queen Elizabeth II's daily routine.

During a regular day at Buckingham Palace, her official London residence, Queen Elizabeth is woken at 7.30am by a chambermaid who brings in her tea tray, with milk. 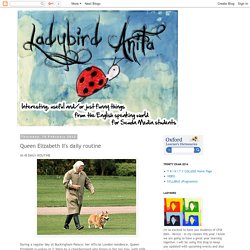 Her bedside wireless is tuned to BBC Radio Four as she likes to listen to the influential Today programme. An avid lover of horses, and a respected breeder of thoroughbreds, Queen Elizabeth enjoys reading the Racing Post newspaper at breakfast with her husband Prince Philip. At 9.30am, she meets her private secretary, Robin Janvrin, who has already gone through the day's correspondence. Together, they go through the day's programme -- receiving a new ambassador, visits to hospitals, inaugurations. Occasionally, she invites a handful of famous faces, artists or business executives to lunch.

It starts with tea: A day in the life of Queen Elizabeth II. She lives in splendid palaces with servants forever at her beck and call, and meets thousands of people every year, but in her private life, Britain’s Queen Elizabeth II leads a reclusive, solitary, sometimes ordinary life. 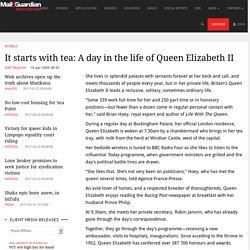 “Some 339 work full time for her and 250 part time or in honorary positions—but fewer than a dozen come in regular personal contact with her,” said Brian Hoey, royal expert and author of Life With The Queen. During a regular day at Buckingham Palace, her official London residence, Queen Elizabeth is woken at 7.30am by a chambermaid who brings in her tea tray, with milk from the herd at Windsor Castle, west of the capital. Her bedside wireless is tuned to BBC Radio Four as she likes to listen to the influential Today programme, when government ministers are grilled and the day’s political battle lines are drawn. “She likes that. She’s not very keen on politicians,” Hoey, who has met the queen several times, told Agence France-Presse. What does the Queen have for breakfast? A day in the life of Her Majesty. We’re all familiar with the Queen’s public persona – but how much do we know about what she gets up to behind closed doors? She’s extremely disciplined and dedicates swathes of her day to keeping up with current affairs.

A creature of habit, she knows exactly what she likes when. But there’s also a naughty, indulgent side – she has biscuits before breakfast and feeds her beloved corgis titbits from the table. We take a little look... Rise and shine, Your Majesty! 7.30am The Queen starts her day bright and early, with a pot of freshly brewed Earl Grey tea (milk, no sugar), poured from silver pots into a bone china cup and a few biscuits before her breakfast. A day in the life of The Queen - her daily routine. Queen Elizabeth II, who recently became the longest-reigning British Monarch in history, is busy from morning until midnight it would seem… Take a look at The Queen’s daily routine and how she spends most of her time. 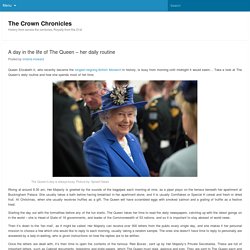 The Queen’s day is always busy. Picture by: Splash News Rising at around 8.30 am, Her Majesty is greeted by the sounds of the bagpipes each morning at nine, as a piper plays on the terrace beneath her apartment at Buckingham Palace. She usually takes a bath before having breakfast in her apartment alone, and it is usually Cornflakes or Special K cereal and fresh or dried fruit. At Christmas, when she usually receives truffles as a gift, The Queen will have scrambled eggs with smoked salmon and a grating of truffle as a festive treat.

Once the letters are dealt with, it’s then time to open the contents of the famous ‘Red Boxes’, sent up by Her Majesty’s Private Secretaries.