Fun Facts of the Day

Life Hacks. Dating Fun Facts. A great number of people worldwide tend to use the internet to find love and companionship through various online dating sites sending people on casual dates over lunch, brunch, or drinks after work. To attract online daters and contact them to express affection and interest, single men and women place their profile photos, sell their life’s resume, and socialize on various media. This include Facebook which is a place where relationships and breakups are public like this “Facebook Big Bang Theory” on YouTube.

Indeed, online dating is social networking but with a different goal in mind. Many claim that the wide geographic reach of online dating also reduces the odds of being humiliated. Easier to endure rejection from afar rather than have someone laugh directly in your face. Alcoholic Fun Facts. Amazing Coincidences. Weird Stuff Life is full of coincidences, some very minor, but occasionally – extraordinary. 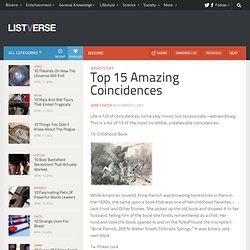 This is a list of 15 of the most incredible, unbelievable coincidences. 15. Childhood Book While American novelist Anne Parrish was browsing bookstores in Paris in the 1920s, she came upon a book that was one of her childhood favorites – Jack Frost and Other Stories. 14. In 1858, Robert Fallon was shot dead, an act of vengeance by those with whom he was playing poker. 13. On 2002, Seventy-year-old twin brothers have died within hours of one another after separate accidents on the same road in northern Finland. 12. In the 19th century, the famous horror writer, Egdar Allan Poe, wrote a book called ‘The narrative of Arthur Gordon Pym’. 11. 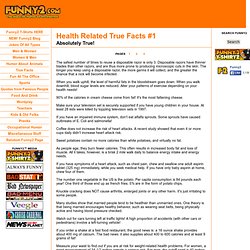 The safest number of times to reuse a disposable razor is only 3. Disposable razors have thinner blades than other razors, and are thus more prone to producing microscopic cuts in the skin. The longer you keep using a disposable razor, the more germs it will collect, and the greater the chance that a nick will become infected. When you walk uphill, the level of harmful fats in the bloodstream goes down. When you walk downhill, blood sugar levels are reduced. 90% of the calories in cream cheese come from fat! Sleep Fun Facts. Sleep Fun Facts. Yawn Fun Fact. By Andrew Newburg | Yawn. 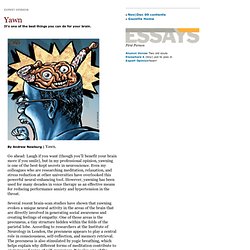 Go ahead: Laugh if you want (though you’ll benefit your brain more if you smile), but in my professional opinion, yawning is one of the best-kept secrets in neuroscience. Even my colleagues who are researching meditation, relaxation, and stress reduction at other universities have overlooked this powerful neural-enhancing tool. However, yawning has been used for many decades in voice therapy as an effective means for reducing performance anxiety and hypertension in the throat. Several recent brain-scan studies have shown that yawning evokes a unique neural activity in the areas of the brain that are directly involved in generating social awareness and creating feelings of empathy. One of those areas is the precuneus, a tiny structure hidden within the folds of the parietal lobe. Why am I so insistent? As a young medical student, I was once “caught” yawning and actually scolded by my professor. My advice is simple. Kissing Fun Facts.

No Themed Fun Fact Websites. Coffee Fun Facts. Math Fun Facts. Did you know that it is possible to cut a solid ball into 5 pieces, and by re-assembling them, using rigid motions only, form TWO solid balls, EACH THE SAME SIZE AND SHAPE as the original? 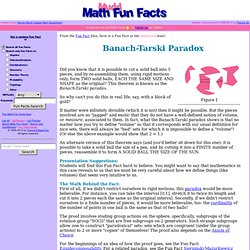 This theorem is known as the Banach-Tarski paradox. So why can't you do this in real life, say, with a block of gold? If matter were infinitely divisible (which it is not) then it might be possible. But the pieces involved are so "jagged" and exotic that they do not have a well-defined notion of volume, or measure, associated to them. In fact, what the Banach-Tarski paradox shows is that no matter how you try to define "volume" so that it corresponds with our usual definition for nice sets, there will always be "bad" sets for which it is impossible to define a "volume"! Presentation Suggestions: Students will find this Fun Fact hard to believe. Brain Fun Facts. Wordly Fun Facts. Rubik's Cube Fun Facts. Finally!!! 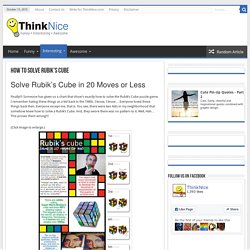 Someone has given us a chart that show’s exactly how to solve the Rubik’s Cube puzzle game. HarryPotter Fun Facts. It all ends this Friday. 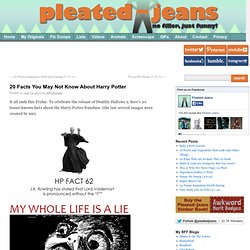 To celebrate the release of Deathly Hallows 2, here’s 20 lesser-known facts about the Harry Potter franchise. (the last several images were created by me). Band Fun Facts. School Fun Fact. Catholic Fun Facts. The Catholic Church owns about 237,000 acres in America U. 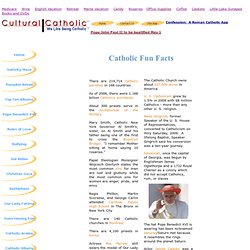 S. Catholicsm grew by 1.5% in 2009 with 68 million Catholics - more than any other U. S. religion. Newt Gingrich, former Speaker of the U. Savannah, once the capital of Georgia, was begun by Englishman James Oglethorpe and a 1732 Royal Charter as a colony which did not accept Catholics, rum, or slaves The hat Pope Benedict XVI is wearing has been nicknamed saturno/Saturn Hat because it resembles the rings around the planet Saturn. Actor James Cagney was a parishioner at Saint Monica Church at 413 East 79 Street in New York City Magna Carta, signed by King John of England in 1215, removed the king's power over the Church Mississippi is the most religious state in the U.