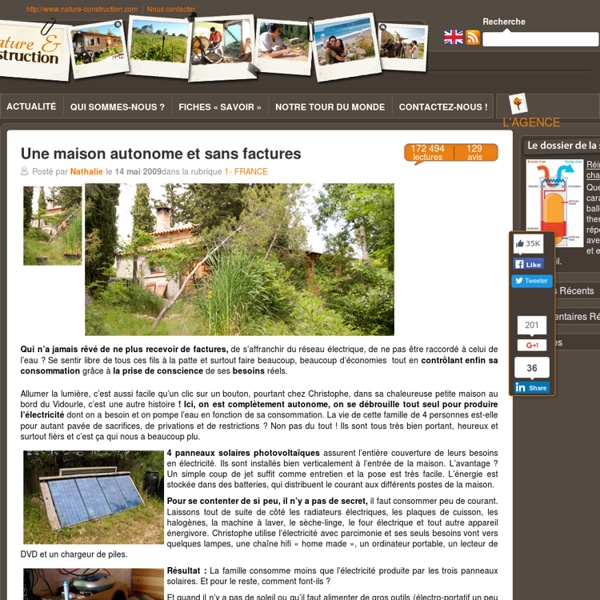 Photo Gallery Pat's First Cob (1998) This was Patrick's first cob project on his own after taking a one week workshop with Cob Cottage Company (CCC) in 1997. He built the foundation and then used beach logs for the frame. CCC then taught a 2 week course, after which Patrick finished the walls and roof. Tracy and Patrick did the plastering. Pierres en équilibre - Michael Grab Michael Grab is an artist that has been ‘rock balancing‘ since 2008. Much of his recent work has been done around the Boulder, Colorado area. Grab finds the process both spiritual and therapeutic. On his site gravityglue.com, Grab explains: “The most fundamental element of balancing in a physical sense is finding some kind of ‘tripod’ for the rock to stand on.

TetraBox Light Liquid to Light Designer Ed Chew takes a green step in the right direction with the TetraBox lamp, a light object made from discarded drink packets that would have otherwise ended up in landfills already packed to the brim. The design is achieved by unfolding the packets and refolding them into hexagonal and pentagonal sections that are then pieced together to form a geodesic sphere or any other desired shape. Here, the Epcot-like ball makes an attractive overhead light and casts an impressive web of shadows and shapes on the surrounding space. Designer: Ed Chew

Earth sheltering Earth sheltering is the architectural practice of using earth against building walls for external thermal mass, to reduce heat loss, and to easily maintain a steady indoor air temperature. Earth sheltering has become relatively more popular in modern times, especially among environmentalists and advocates of passive solar and sustainable architecture. However, the practice has been around for nearly as long as humans have been constructing their own shelters.

Self-sufficient couple builds their own floating off-grid island (Video) From no-waste, no-impact, buy-nothing, no-money to living tiny, there are a multitude of saner and more courageous alternatives to the unthinking, zombie wastefulness of mainstream living. For Canadian couple Wayne Adams and Catherine King, living self-sufficiently meant building their own floating island near Tofino, British Columbia, consisting of twelve interconnected platforms that support their home, greenhouse, lighthouse and a dance studio. Wayne, a sculptor, and Catherine, a retired ballerina and carver, began building this extraordinary home back in 1992. They have dubbed it "Freedom Cove," and call it a "floating food garden." Paper Art - Elsa Mora Artwork and Photography © Elsa Mora ↓ Links to other galleries: *Artist’s Books *Mixed Media *Painting *Editorial *Drawing *Jewelry *Photography

Build a Barn Greenhouse I have been dying to show you my Mother's Day present. For years and years and years, I've been wanting a greenhouse. Up here in Alaska, the only way you are going to eat cucumbers or tomatoes off the vine is to grow a greenhouse. Or steal from your Mom's greenhouse. But every year, every spring, we just have so much going on, the greenhouse never happens. Next year, we say. Metal Home Kits, Steel Home Kits, Green Homes Whether you're looking for an economical housing option, an environmentally friendly one or simply a unique building to call home, SteelMaster's prefab homes are the perfect solution for your needs. Traditional houses require multiple contractors, many months and a hundred thousand dollars or more to complete. The steel component of your SteelMaster steel home, on the other hand, can often be completed in just a few days and is absolutely a project for do-it-yourselfers. Most people erect the shell of their metal homes simply by enlisting the help of several friends.

How to Build Your Own Starter House in Just 5 Steps — for $25,000 — TED Fellows How to Build Your Own Starter House in Just 5 Steps — for $25,000 Wanna ditch the mortgage and live in a modular, open source, ecological house? Introducing the Open Building Institute Eco-Building Toolkit. Picture this: you own a small piece of land. Performance Sand Art - Kseniya Simonova Born in a small town on the Crimean peninsula in Ukraine, Kseniya Simonova has skyrocketed to international stardom following her 2009 win of Ukraine’s Got Talent. Her combination of story telling, sand art, and music has been showcased in over 200 performances over the past 4 years, including locales such as Ukraine, Russia, Norway, Japan, Poland, Austria, China, The United Kingdom, India, Italy, Germany, Kazakhstan, Malta, and others. She performs regularly for presidents, heads of state, and royalty. Since she was a child, Kseniya painted, drew and designed alongside her mother and family. Kseniya would later become a fashion model, though she graduated from higher studies with a degree in medico-psychology. Her devotion to live sand art began when her now-husband Igor discovered her as a model.

Free Plans Several free plans by Owen Geiger are now available: Preview the Economizer House Plan here.Economizer House Plan PDF Solar Pit House PDF Preview the Solar Pit House plan here. Asheville Shipping Container Home Design, Big Boom Box ISBU homes, North Carolina Shipping Container Home Designs and Plans for Your Container Project To view the archive of postings – shipping container home design archive. I’ve been receiving a ton of requests for information about floor plans, container specs, renderings, container sales, etc… so I’ve decided to start a section on the Big Boom Blog dedicated to building spaces with Shipping Containers. As I create and find valuable information that pertains to the ins and outs of building with shipping containers, I’ll be posting it here…. actually the container posts will go here. If you would like to receive RSS updates on Shipping Container Homes from Big Boom Design, just click here. If you have specific questions about building materials or designs please send me an email at info@bigboomdesign.com or you can fill out the contact form here.

La Fábrica – Ricardo Bofill Taller de Arquitectura We found enormous silos, a tall smoke stack, four kilometres of underground tunnels, machine rooms in good shape… This was in 1973 and it was our first encounter with the Cement Factory. This cement factory, dating from the first period of the industrialization of Catalonia, was not built at once or as a whole but was a series of additions as the various chains of production became necessary. The formal result was given, then, by a series of stratified elements, a process which is reminiscent of vernacular architecture, but applied to industry. Keeping our eyes moving like a kaleidoscope, we already imagined future spaces and found out that the different visual and aesthetics trends that had developed since World War I coexisted here:

DIY smart materials The piano box is a (somewhat polyphonic) paper toy synthesizer with 12 keys, each triggering a tone and an LED. The keys are a set of capacitive sensors, made of copper tape, controlled by an Arduino Mega running the ... Last summer a few of us at NYC Resistor made the JelTone, a jello-based toy piano that can be eaten and played.