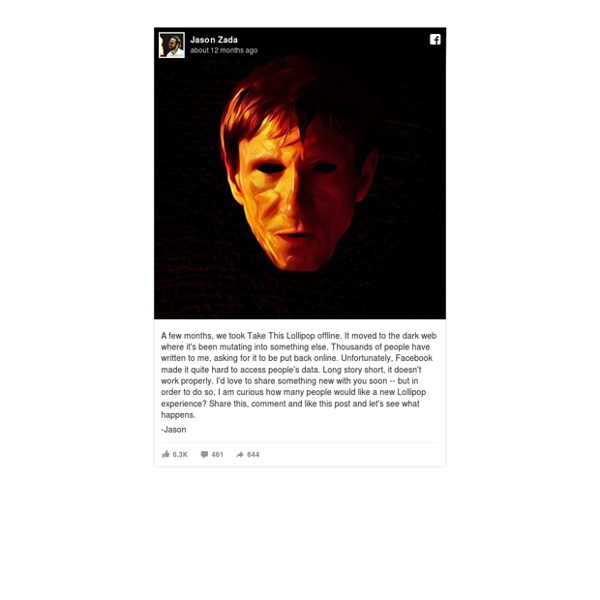 Digital Birth: Welcome to the Online World AMSTERDAM--(BUSINESS WIRE)--Uploading prenatal sonogram photographs, tweeting pregnancy experiences, making online photo albums of children from birth, and even creating email addresses for babies - today’s parents are increasingly building digital footprints for their children prior to and from the moment they are born. “Our research shows that the trend is increasing for a child’s digital birth to coincide with and in many cases pre-date their real birth date. A quarter of babies have sonogram photos posted online before they have even physically entered into the world. ”Tweet this Internet security company AVG surveyed mothers in North America (USA and Canada), the EU5 (UK, France, Germany, Italy and Spain), Australia/New Zealand and Japan, and found that 81 percent of children under the age of two currently have some kind of digital profile or footprint, with images of them posted online. Key results

30 Compelling Examples of Visual Storytelling on the Web Storytelling is a powerful approach that can, when done right, compel users to convert more effectively than what any amount of optimization, crazy visual callouts, or awesome interactive elements can do otherwise. Much like how we expect to see a moral at the end of a book, we expect to find a purpose at the end of a site with a storytelling experience. When the path to the “moral of the story” (or conversion point, to be more specific) is laid out clearly in front of our users’ eyes, the rest of the work lies simply in convincing them that the purpose is really worth grabbing on to… which is great since with storytelling, a user is normally in the mindset of learning more about what the story has to offer. So take a look at the examples below and experience how their visual storytelling compels you to continue scrolling down their pages! 1. MoMA Century of the Child (

Online screening: Journey To The End Of Coal A project powered by Klynt Editing & publishing app. Journey To The End Of Coal tells you the story of a sacrifice. A sacrifice millions of Chinese coal miners are making everyday, risking their lives and spoiling their land to satisfy their own country’s appetite for economic growth. Your journey begins in Datong which is located just a couple hours away West from Beijing. Guy Fawkes Mask: How Anonymous hacker group created a powerful visual brand Anonymous logo from parasearcher.blogspot.com. The loosely affiliated and ever-changing band of individuals who call themselves Anonymous have been variously described as hackers, hacktivists, free-expression zealots, Internet troublemakers, and assorted combinations thereof. By all accounts the group has no clear hierarchy or leadership, or even any internal agreement about what exactly it is. And yet, as you’ve encountered news and speculation about Anonymous—maybe from reports about coordinated denial-of-service attacks on financial institutions that stopped doing business with WikiLeaks last year, or the group’s more recent association with Occupy Wall Street—you may also have noticed its memorable logo: a suited figure with a question mark where his head should be, set against a U.N.

115 Ways to Tell If You Are Filipino!! Kim and Krickitt Carpenter, the real-life couple who inspired the film "The Vow," stopped by the "Today Show" on Monday to talk about their marriage and the tragic car accident that changed their lives forever. The couple had only been married for two months when the accident left Krickitt without any memory of her marriage in November 1993. Despite Kim's efforts to jog his wife's memory, nothing worked. So Kim decided to make Krickitt fall in love with him all over again. Fleas in a Bottle?: Will Social Networking Stymie Personal Development of Youth? Recently I was giving a workshop on digital footprints at the CUEBC Conference Saturday at Simon Frazer University, Vancouver, BC. A digital footprint is the collection of all the traces you leave in electronic environments as you use or move through them. Some is content you actively volunteer—like your Facebook profile. Other material is passive—the cookies a site stores in your browser, the content your district collects about your use of their equipment, etc. All this data can be aggregated to build a profile of you and your behavior—to profile you in the FBI-sense of the word.

Planet Money Makes A T-Shirt Why A T-Shirt? We wanted to see the hidden world behind clothes sold in this country, so we decided to make a T-shirt. We wanted to make an ordinary shirt like the vast majority of the shirts sold in this country — not organic cotton, not hand-sewn in the United States. To figure out how many shirts to make, and to raise money to pay for them, we turned to Kickstarter. Our goal was to sell 2,000 shirts. In the end, we sold 25,000.

The Miracle Mile Paradox ARG by Transmedia LA Rexford Higgs, in the video above, is just one of many characters with which you will be able to interact as if they were real people in The Miracle Mile Paradox, an alternate reality game (ARG) set in a historic neighborhood of Los Angeles. The game will run for 14 weeks this summer and will be playable both online and in real life for free! It's simple! All the "in game" characters like Rex will have websites, Facebook pages, Twitter accounts, even phone numbers, which you can read, follow and call as you discover pieces of the story.

Episode 42- Recognizably Anonymous (Press Play... Anonymous is not group. It is not an organization. Rob Walker describes Anonymous as a “loosely affiliated and ever-changing band of individuals who… have been variously described as hackers, hacktivists, free-expression zealots, Internet troublemakers, and assorted combinations thereof.” But when Anonymous came up against the Church of Scientiology, a small, non-hierarchical collection of Anons decided to take the disparate phrases, images and ideas circling around the 4Chan.org /b/ message board (where Anonymous has its roots) and combine them into a very engaging and effective “brand identity” (For lack of a better word. Is there a better word? Infinity symbol ∞ (learn to type infinity sign on keyboard) Infinity ∞ is a maths text symbol for an infinite number that people had been texting from the times when ASCII encoding was developed. And you can type it right from your keyboard. I'll show you how to do it by using different techniques depending on your Operating System and tastes.