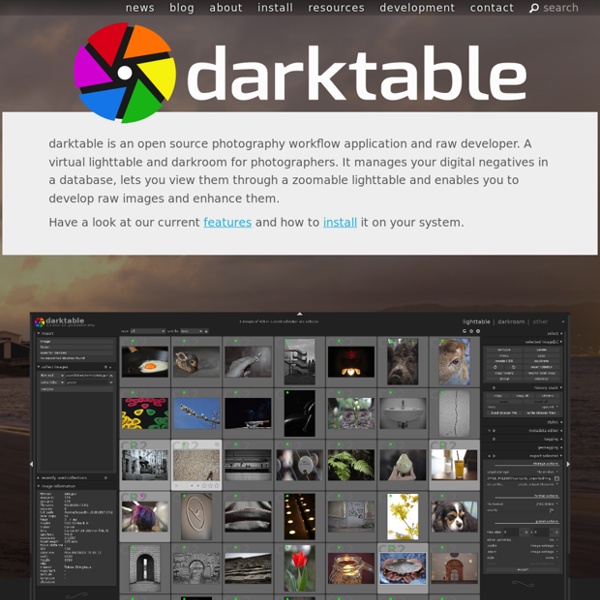 Pixel Art Chances are that if you've used Pixel Art before, you've wanted to try to take a normal image and pixelate it. Well up until now, that's been a massive nightmare and would require external, specialized software. Not any more if you have Pixel Art Pro! Now all you have to do is open up a picture that you want to pixelate, and Pixel Art will detect it, and you just have to click the magic 'Pixelate' button** and let Pixel Art do all of the hard work for you! The result? Amazing! MainPage - gimp-plugin-insanebump - Main content page - Gimp Plug-in InsaneBump converted and improved from python script This is the main repository for the source code for the Gimp plug-in InsaneBump. This is a C language version of the Insane Bump plugin. I have converted the Python code to a C language program and all the needed libraries and tools to do so. I have improved upon this program by adding an AO adjustment and 5 Preview panes.

Apps/Dia Welcome to Dia's new homepage. Dia is a GTK+ based diagram creation program for GNU/Linux, MacOS X, Unix, and Windows, and is released under the GPL license. Dia is roughly inspired by the commercial Windows program 'Visio,' though more geared towards informal diagrams for casual use. It can be used to draw many different kinds of diagrams. It currently has special objects to help draw entity relationship diagrams, UML diagrams, flowcharts, network diagrams, and many other diagrams. News If you haven't seen Tim's Vermeer yet, go see it! It's about using technology to make great art. It's about persistence and plowing through an insane project one day at a time. Things every photographer and 3D artist can relate to.

PTAssembler Introduction. PTAssembler is a (Windows) panoramic image stitching software program, able to create single and multi-row panoramic and high-resolution "mosaic" images. As a software developer and photographer, I have been using PTAssembler for several years to create my own high resolution images. PTAssembler is more complex than many popular "automagic" stitching programs. But, it is much more powerful and flexible, giving the photographer unparalleled control over the final result. The automagic programs often deliver "pretty good" results. FastStone Image Viewer FastStone Image Viewer is a fast, stable, user-friendly image browser, converter and editor. It has a nice array of features that include image viewing, management, comparison, red-eye removal, emailing, resizing, cropping, retouching and color adjustments. Its innovative but intuitive full-screen mode provides quick access to EXIF information, thumbnail browser and major functionalities via hidden toolbars that pop up when your mouse touches one of the four edges of the screen. Other features include a high quality magnifier and a musical slideshow with 150+ transitional effects, as well as lossless JPEG transitions, drop shadow effects, image annotation, scanner support, histogram and much more. It supports all major graphic formats (BMP, JPEG, JPEG 2000, animated GIF, PNG, PCX, PSD, EPS, TIFF, WMF, ICO and TGA) and popular digital camera RAW formats (CRW, CR2, NEF, PEF, RAF, MRW, ORF, SRF, ARW, SR2, RW2 and DNG). No Adware.

Insane Bump This is a normal map generator from a single image, originally created by omaremad. Load a single layer picture, then choose filters/map/insanebump..., tweak the details, then hit OK. The normal/height/ambiend/specular maps for the picture will be created within the folder where the original picture resides. The script produces different files within the original image's directory: the _n is the normal map, the _s is the specular, the _d is the diffusion (just the color) the _a is the ambiend occlusion the _h is the displacement (or height map)

Scratch Offline Editor You can install the Scratch 2.0 editor to work on projects without an internet connection. This version will work on Mac, Windows, and some versions of Linux (32 bit). Note for Mac Users: the latest version of Scratch 2.0 Offline requires Adobe Air 20. MAX — The Creativity Conference Maira Kalman was born in Tel Aviv and moved to New York with her family at the age of four. She was raised in bucolic Riverdale, the Bronx. She now lives in Manhattan.