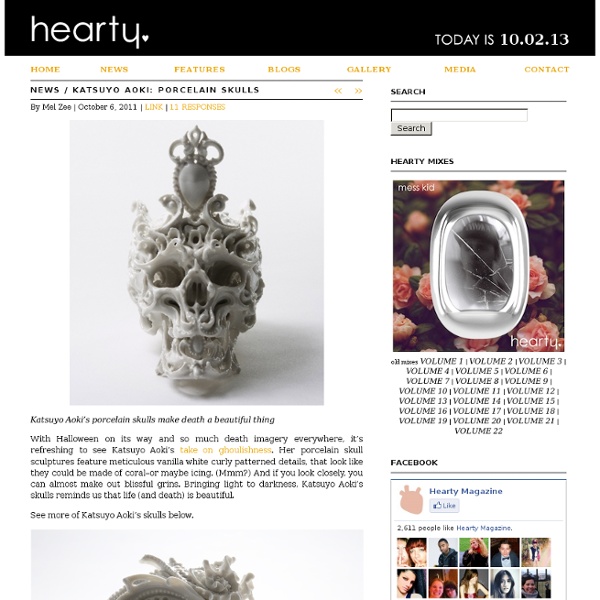 Katsuyo Aoki’s porcelain skulls make death a beautiful thing With Halloween on its way and so much death imagery everywhere, it’s refreshing to see Katsuyo Aoki’s take on ghoulishness. Her porcelain skull sculptures feature meticulous vanilla white curly patterned details, that look like they could be made of coral–or maybe icing. See more of Katsuyo Aoki’s skulls below. Related:  Skull Artwork

Incredible Skull Illusions Renown artist Istvan Orosz has made illustrations for a new edition of “Ship of Fools,” a late 15th century book by Sebastian Brant. Orosz’ optical illusions revolve around Medieval themes, and they are meticulously planned and executed. You can view more images from this collection at Gallery Diabolus. See also: “Magical Mirror Anamorphoses,” and “The Skull Illusion.” Images © Istvan Orosz, courtesy of Gallery Diabolus Link via Utisz Hyper-Realistic Rubber: Tire Sculpture by Yong Ho Ji Whenever I take road trips, I often notice the hulking shreds of stripped semi tires laying around, and I’ve always thought two things: one, they look almost organic- like they’re actually the carcasses of some prehistoric animal that blundered its way onto the highway, and two- that that animal must have been damn ugly. But when I saw a tire sculpture by Yong Ho Ji the other day, I realized I was pretty wrong about the hideous part. He reassembles strips of old tires with resins and screws into gorgeous creatures with predatory stances and sinuous movement. We love our cars, so seeing tires re-purposed after their regular lifespan into perfect manly sculptures is totally bad ass. It’s the macho trifecta: hang one of these rubber animal busts on the wall, and you get the appearance of being an awesome trophy hunter without actually killing any animals, you’re saving the planet by recycling, and your sculpture isn’t some sissy flowers or soapstone carved by a three year old.

Intricate Glass Model of Human Body is a Breathtaking Medical Teaching Tool Proving that art and science aren’t mutually exclusive, Gary Farlow’s team at Farlow’s Scientific Glassblowing reproduces breathtaking anatomically correct glass models of the human body. These intricate glass sculptures are used for teaching in medical training, able to simulate blood flow, demonstrate new surgical tools and teach placement of catheters and angioplasty devices. “We do almost every part of the body,” Farlow tells Wired. “It can take a pretty artistic mind to make some of these things.” The arteries, veins and capillaries are shaped individually are fused together. Check out the full gallery at Wired. The Amazing Crayon Art Of Christian Faur Christian Faur is an artist based in Granville, Ohio. Looking for a new technique, he experimented with painting with wax, but he didn't feel the results were satisfactory. Then, at Christmas in 2005, his young daughter opened a box of 120 Crayola crayons he'd bought her, and everything clicked into place. Faur decided he would create pictures out of the crayons themselves, packing thousands of them together so they become like the colored pixels on a TV screen. He starts each work by scanning a photo into a computer and breaking the image down into colored blocks He then draws a grid that shows him exactly where to place each crayon The finished artworks are packed tightly into wooden frames. Source

Our Exquisite Corpse Huichol Beaded Skulls There is always something simply beautiful about traditional works. The sense of history and craftsmanship behind some of the most beautiful artifacts outshine even the most brilliant of contemporary works. Such is the case with the Our Exquisite Corpse Huichol beaded skulls currently presented by LN-CC . Working directly with the Huichol people of Mexico the group curated an interested collection of handcrafted skulls. The skulls stand as not only art but a piece of history of the Huichol people.

Alan Sailer-Exploding Objects We found this pretty damn interesting and with technology these days the impossible is becoming possible. Photographer Alan Sailer comes up with a unique way to display exploding objects as art. Alan uses his garage to take these photos and he is able to make them brilliant by using a laser that triggers the flash to go off at the perfect second. A glass skull and an eye are just a few things that Alan is shooting these days and I’m sure he is enjoying every minute of it. (Via Format Mag) Take a look at the gallery below. Related "Brand Spirit" - Branded Objects in White Here is an interesting take on branded items that have all been removed of their branding by being painted white. In "Art" Proposition One - Max de Esteban Titled "Proposition One" we have to say it takes a damn creative mind and patient one at that to create photography such as this. In "Photography" Portraits by Patrick Bremer Today we present artist Patrick Bremer.

Cool sculptures by Stephane Halleux Stephane Halleux was born on July 6th in Chenée (Liège), Belgium. Shortly thereafter–and very often against his will—he was taken off to museums where he was supposed to be awakened to art in all its forms. At the age of 10, while visiting the Stedelijk Museum in Amsterdam, the work of sculptor Jean Tinguely suddenly caught his attention. He discovered the magic power of strange play-like structures without any utility purpose. In 1995, during his last high study year at Saint Luc in Liege, Stéphane created the first pieces that look similar to his current works. His first exhibitions were such a success that since 2005 he has devoted all his time to his realizations. Official website You might also like Comments Michael Dachstein Inspiration junkie :)

Scraping Away the Skin on Skull Nickels By James on September 28th, 2011 at 3:07 pm Art, Picture Pages Welcome Stumblers! If you think this post is cool, you can find more of our latest and more popular posts in the sidebar to the right. The term “Hobo Nickel” describes any small-denomination coin (though, normally soft nickels) that people carve to create miniature reliefs of…well, all sorts of things. This all sounds stimulating, I know, but have a little faith. Source – Colossal Art & Design Other Things You Might Find Interesting {*style:<ul>*}{*style:<li>*}{*style:<a href=' Adventure Time{*style:</a>*} My son knows that I’m an artist and he understands I draw comics but when I told him I was drawing Finn and Jake he looked at me like I was a movie star.

Tiny People's Wonderful World of Food Ready for some "miniature" stories? Using tiny model figures and food, Seattle-based artist Christopher Boffoli creates fantastic scenes that mimic everyday life! His collection, titled Disparity, is shown in galleries all across the United States. Why did the artist start down this creative path? "The hand-painted figures that I work with are made for HO scale model train sets," he tells us. "It is probably no coincidence that around age ten I had a large, elaborate model train layout that my father built for my brother and me. "I suppose there is in some part a god-like feeling to having command of an entire world which you can rearrange at any capricious whim. Update: We got in touch with the artist to ask him more questions, including why he chose to work with food. Why do most all of your scenes involve food? Like many young boys, I built scale models of cars, planes and boats when I was a kid. What do you find to be the most enjoyable part of putting these scenes together?