15 Things You Should Give Up To Be Happy 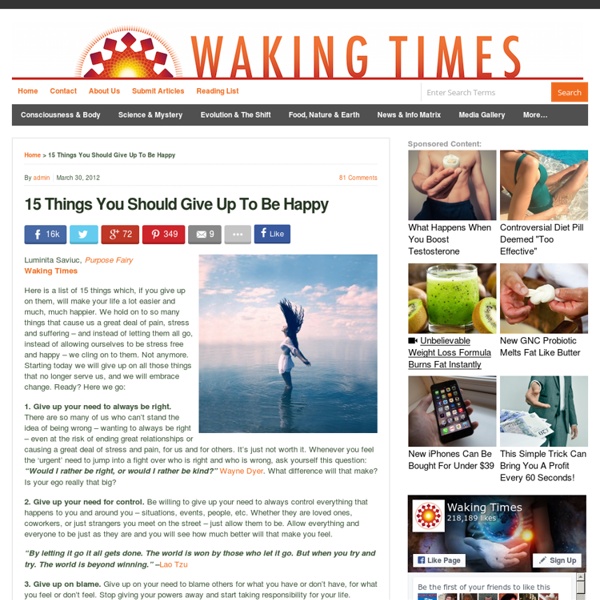 Luminita Saviuc, Purpose FairyWaking Times Here is a list of 15 things which, if you give up on them, will make your life a lot easier and much, much happier. We hold on to so many things that cause us a great deal of pain, stress and suffering – and instead of letting them all go, instead of allowing ourselves to be stress free and happy – we cling on to them. Not anymore. Starting today we will give up on all those things that no longer serve us, and we will embrace change. Ready? 1. 2. “By letting it go it all gets done. 3. 4. “The mind is a superb instrument if used rightly. 5. “A belief is not an idea held by the mind, it is an idea that holds the mind.” 6. 7. 8. 9. “Follow your bliss and the universe will open doors for you where there were only walls.” 10. “The highest form of ignorance is when you reject something you don’t know anything about.” 11. “The only fear we have to fear, is fear itself.” 12. 13. 14. 15. About the Author

Teaching well-being through the skills of awareness – Wisdom True self-respect can be challenging to achieve—but it is the platform for all personal growth. To see Rinpoche discuss what the mind is and how to understand it, please click here. Perception Perception is innate, hard-wired in our systems. Depression Tips A while ago, I penned a fairly angry response to something circulating on the internet – the 21 Habits of Happy People. It pissed me off beyond belief, that there was an inference that if you weren’t Happy, you simply weren’t doing the right things. I’ve had depression for as long as I can remember. 50 Ways to Get Your Life in Order This is an article by guest writer Mark Foo, author of The 77 Traits of Highly Successful People. There’s nothing wrong with a little bit of chaos in your life. As Albert Einstein once stated, “Three rules of work: out of clutter find simplicity, from discord find harmony, in the middle of difficulty lies opportunity.”

In Praise of Idleness By Bertrand Russell Like most of my generation, I was brought up on the saying: 'Satan finds some mischief for idle hands to do.' Being a highly virtuous child, I believed all that I was told, and acquired a conscience which has kept me working hard down to the present moment. But although my conscience has controlled my actions, my opinions have undergone a revolution.

12 Tough Truths that Help You Grow As you look back on your life, you will often realize that many of the times you thought you were being rejected from something good, you were in fact being redirected to something better. You can’t control everything. Sometimes you just need to relax and have faith that things will work out. Let go a little and just let life happen.

Dokkōdō The "Dokkōdō" [ (Japanese: 独行道?); "The Path of Aloneness", "The Way to Go Forth Alone", or "The Way of Walking Alone"] is a short work written by Miyamoto Musashi (宮本 武蔵) a week before he died in 1645. It consists of either nineteen or twenty-one precepts; precepts 4 and 20 are omitted from the former version. "Dokkodo" was largely composed on the occasion of Musashi giving away his possessions in preparation for death, and was dedicated to his favorite disciple, Terao Magonojō (to whom the earlier Go rin no sho [The Book of Five Rings] had also been dedicated), who took them to heart. "Dokkōdō" expresses a stringent, honest, and ascetic view of life.

Happiness “The amount of happiness that you have depends on the amount of freedom you have in your heart.” – Thich Nhat Hanh Who doesn’t want to be happy? Just take a look at any moment of your life, any choice you make. Isn’t your intention to be happy? By happiness, I don’t necessarily mean the pollyanna, silly-smile-on-your-face kind. What I mean is a deep sense of contentment, the capability of being peaceful and at ease no matter what, an inner knowing that things are just fine.

Six Ways To Make People Like You Six Ways To Make People Like You Become genuinely interested in other people.Smile. Remember that a man's name is to him the sweetest and most important sound in the English language. Be a good listener. Encourage others to talk about themselves. Talk in terms of the other man's interest. Feeling Like a Man In pop culture, the concept of “feeling like a woman” permeates both advertising and entertainment. From songs such as Aretha Franklin’s You Make Me Feel Like a Natural Woman to Shania Twain’s Man! I Feel Like a Woman! , the idea that feeling like a woman is a glorious thing is spread throughout our culture. It may be that men wrote these songs (actually, men are listed as “co-writers” for both), but the message is embraced by women everywhere.

Do It Now by Steve Pavlina When going to college many years ago, I decided to challenge myself by setting a goal to see if I could graduate in only three semesters, taking the same classes that people would normally take over a four-year period. This article explains in detail all the time management techniques I used to successfully pull this off. In order to accomplish this goal, I determined I'd have to take 30-40 units per semester, when the average student took 12-15 units. It became immediately obvious that I'd have to manage my time extremely well if I wanted to pull this off. I began reading everything I could find on time management and putting what I learned into practice. I accomplished my goal by graduating with two Bachelor of Science degrees (computer science and mathematics) in just three semesters without attending summer school.

Katie Paterson's award-winning Fossil Necklace will fail the test of history A necklace of polished stones hangs in a small darkened room at the Wellcome Collection in London. Its colourful arrangement of rocks is easy on the eye. What's it all about? Outside the viewing chamber is a key to Katie Paterson's artwork Fossil Necklace. Each glittering pebble is actually a polished fossil, and together they amount to a chart of evolution – in the form of a necklace. Interesting. How To Train Yourself To Be In The Mood You Want Dec 27, 2010 When you have major changes going on in your life, or you’re just frustrated about where you are, it’s easy to get trapped in a cycle of depression, bad moods and frustration. I know, I’ve been there … and when I’m not careful, I still get there more than I want to.

Have you had a Kundalini Awakening? In recent times many people have experienced spontaneous kundalini awakening. By that I mean a full blown “awakening” with feelings of energy rushing up the spine and many unpleasant sensations in the body. While there is no doubt kundalini can do much good, many report disturbing – even psychotic – side-effects. These have come to be known as kundalini syndrome.