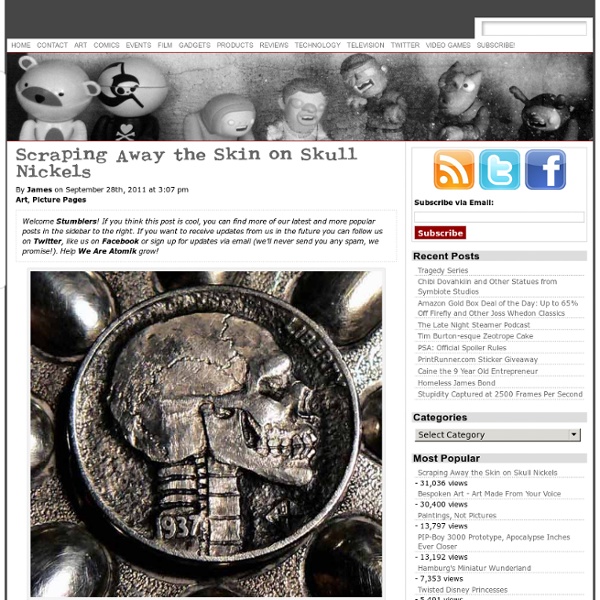 By James on September 28th, 2011 at 3:07 pm Art, Picture Pages Welcome Stumblers! If you think this post is cool, you can find more of our latest and more popular posts in the sidebar to the right. If you want to receive updates from us in the future you can follow us on Twitter, like us on Facebook or sign up for updates via email (we’ll never send you any spam, we promise!). Help We Are Atomik grow! The term “Hobo Nickel” describes any small-denomination coin (though, normally soft nickels) that people carve to create miniature reliefs of…well, all sorts of things. This all sounds stimulating, I know, but have a little faith. Source – Colossal Art & Design Other Things You Might Find Interesting {*style:<ul>*}{*style:<li>*}{*style:<a href=' Adventure Time{*style:</a>*} My son knows that I’m an artist and he understands I draw comics but when I told him I was drawing Finn and Jake he looked at me like I was a movie star.

The Multicultural Leadership Scholars Program I think age and race has had the most impact on my life thus far, for the sole reason that these two dimensions were the first I realized. In elementary school I was one of three to four white students in the whole school. My earliest memory of my race being apparent is when I was in 2nd grade. Katsuyo Aoki: Porcelain skulls Katsuyo Aoki’s porcelain skulls make death a beautiful thing With Halloween on its way and so much death imagery everywhere, it’s refreshing to see Katsuyo Aoki’s take on ghoulishness. Her porcelain skull sculptures feature meticulous vanilla white curly patterned details, that look like they could be made of coral–or maybe icing. (Mmm?) And if you look closely, you can almost make out blissful grins. Bringing light to darkness, Katsuyo Aoki’s skulls reminds us that life (and death) is beautiful.

Choi Xooang (click images for detail) All at once delicate and nightmarish these painted polymer clay figures by Seoul-based artist Choi Xooang are nothing short of remarkable. Try as I might it’s hard to find a definitive, trustworthy article to source information from, and even the spelling of his name seems to change from site to site. However it seems generally accepted that Xooang is attempting to draw attention to human rights abuses in Korea, and seeing these somewhat macabre, stunted figures unable to see or speak, it’s hard to dispute that. You can see much more of his work at Mu Um and Slash, though be warned it’s somewhat graphic (generally nudity). I admit the mushroom cloud sculpture is a bit of a one-off, but I saw it was just posted yesterday and couldn’t resist.

Amazing Nails Life Art Story by Vlad Artazov The way Czech photographer Vlad Artazov arranges nails in settings that are astonishingly like real life is definitely worth attention. With only bent nails and some basic sets, he is able to convey a whole spectrum of human emotions. The result is beautiful and surprisingly, sadly touching. Mostly black and white photography really gives you a better focus on the story that the photos express. If you like this Nail Art you probably like and this Hammer and Nails Art by Saimir Strati.

koikoikoi.com - Visual Arts Magazine... - StumbleUpon Sayaka Kajita Ganz was born in Japan but now she’s living and working in Indiana, USA. She use discarded objects, mainly made in plastic, like kitchen tools, hangers, etc, to create stunning sculptures inspired by animals and nature. She says about her work “It is a way for me to contemplate and remind myself that even if there is conflict right now, there is a way for all the pieces to fit together.”. Huge Model of Isengard From Over 22000 LEGOs Master LEGO building team OneLUG have completed their incredible model of the Battle of Isengard, a key battle in The Lord of the Rings: The Two Towers. The model includes a whopping seven-foot tall Orthanc tower, dozens of ents, over a hundred orcs, and two small hobbits. Built to minifig scale, the entire tableau weighs 145 pounds, and uses 22,000 LEGO bricks across its eight-foot diameter.

Armor Mice and Cats Advertisement If you love cats or mice, you should definitely check this stunning collection of armor for animals. Jeff de Boer is creative artist, he made inspirational characters of Cats and mouse consists of armor for gladiators, medieval knights. If you want to learn its brilliant techniques of make a Samurai Cat. He has given some ideas of what goes into the making of samurai Cat. You may also like other Artist Work Shoe Design Specifications - Shoes of Prey Go one step further and add an inscription to your fab shoes. A custom message, a name or an auspicious date stamped alongside the Shoes of Prey insignia transforms your shoes into a truly personalised keepsake! To add your own personal inscription to your shoes, select it in Your Order Summary at the checkout.

Sculptures: Flash Memory « Chuk'num The amazing sculptures you are about to see were crafted by three artists including Liu Zhan, Kuang Jun and Tan Tianwei. These outstanding creations were part of an exhibition titled “Flash Memory” which is currently held in Beijing till December 31, 2011. the sculptures themselves are out of this world, instead of just sculpting the reality around us, these artists deformed it, or did not complete it in this case.