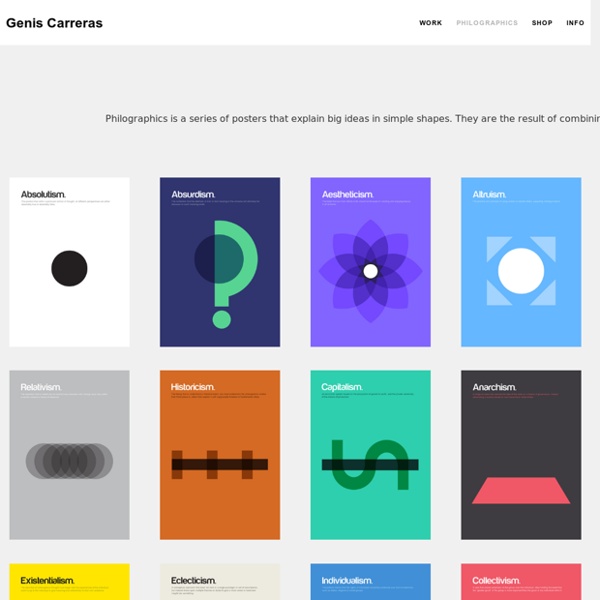 Philographics Philographics is a series of posters that explain big ideas in simple shapes. They are the result of combining the world of philosophy with graphic design. You can get the entire set of 95 designs as a book or a selection of them as posters. Cart - 0 items

The History of Philosophy in an Infographic “Let not the youngest shun philosophy or the oldest grow weary of it,” said Epicurus to Meniceus in a letter. “To do so is the equivalent to saying either that the time for a happy life has not yet come or that it is already past.” And yet, it’s not a default choice to turn to philosophy as a guide to learning to live well. Depending on your experience in traditional education, philosophy may have been one of those subjects that was pushed to the side like vegetables, either because it was too abstract or because the kind of critical thinking that’s necessary to delve into the subject is seemingly too tiring (this also applies, sadly, to science, art, and math). The Greek stoic philosopher Epictetus said, “Philosophy’s main task is to respond to the soul’s cry; to make sense of and thereby free ourselves from the hold of our griefs and fears.”

Selfiexploratory The upper part shows charts that you can use as , while the lower part displays the . Click on any of the circles to see only selfies taken in that city. Clicking on the map background will remove the filter. 20 Gifs That Explain How Things Work Sometimes you just need an image to help you understand something. And if that image is in motion and shows you something that you otherwise would never see, all the better. Below is a set of animated gifs that show us how certain things work. What happens when we swallow. How keys and locks work. Incredible Landscapes Carved Into Books Hailing from Quebec, fellow Canadian Guy Laramee is a man with many talents. Not only is he a very accomplished painter and sculptor, but Guy is also a highly regarded musician, composer and stage director. With more than 30 years of practice, Guy’s work has been seen and heard in galleries and theaters around the world. And when he’s not involved in his artistic pursuits, he finds time to pursue an investigation in the field of anthropology. Below you will find a collection of his incredible book carving work from his series’ titled The Great Wall and Biblios. In these series, Guy carves magnificent landscapes into relevant volumes of work, some pieces using well over ten books.

Why not Stoicism? by Massimo Pigliucci Stoicism has been in the back of my mind since I was very young, initially for the obviously parochial reason that it was the prevalent philosophy among the ancient Romans, i.e., part of my broadly construed cultural heritage. (Then again it is for the same reason that Buddhism is very popular in India, Confucianism in China, and Shinto in Japan.) Lately, however, Stoicism has slowly moved to the forefront of my cognitive field of view, for a number of reasons. To begin with, I’ve been interested in philosophical counseling [1], to the point of having taken the American Philosophical Practice Association course [2], and having set up what is turning out to be a surprisingly successful and enjoyable practice [3].

The 60 Most Powerful Photos Ever Taken That Perfectly Capture The Human Experience This incredible collection of moments represents the joy, innocence, despair, curiosity, and undying perseverance within all of us. No matter where we’re from, these are the emotions that unite us – it’s what makes us human. We set out to capture this spirit in 60 incredible photographs, and I truly hope you enjoy. 20 Things to Remeber If You Love Someone With ADD It’s a fact; a person with ADD is hard to love. You never know what to say. It’s like walking through a minefield. You tiptoe around; unsure which step (or word) will be the one that sets off an explosion of emotion.