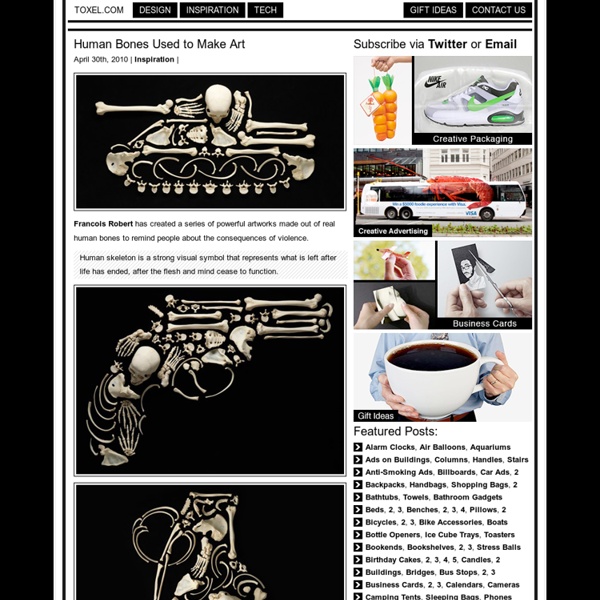 Francois Robert has created a series of powerful artworks made out of real human bones to remind people about the consequences of violence. Human skeleton is a strong visual symbol that represents what is left after life has ended, after the flesh and mind cease to function. Also check out: Fruit and Vegetable Skulls Related:  Controversial Artwork

Product Design Inspiration - DesignM.ag - موزيلا فَيَرفُكس Get the FlatPix UI Kit for only $7 - Learn More or Buy Now Most designers are happy to find inspiration in various forms of daily life. Product design can be an interesting source of inspiration, as there are creative and well-designed products all around us. The products featured here may not be common things that you see everyday, but most of them are fairly typical products designed in a unique way. (Click on the photos to see more from Behance.) About Steven Snell Stephen Snell is the owner and editor of Vandelay Design. Marina Abramović Marina Abramović (Serbian Cyrillic: Марина Абрамовић; born November 30, 1946) is a Serbian[1][2][3] and former Yugoslav artist based in New York, a performance artist who began her career in the early 1970s. Her work explores the relationship between performer and audience, the limits of the body, and the possibilities of the mind. Active for over three decades, she has been described as the "grandmother of performance art." Early life and education[edit] Her father left the family in 1964. She was a student at the Academy of Fine Arts in Belgrade from 1965 to 1970. From 1971 to 1976, she was married to Neša Paripović. Career[edit] Rhythm 10, 1973[edit] In her first performance in Edinburgh 1973,[9] Abramović explored elements of ritual and gesture. Rhythm 5, 1974[edit] In this performance, Abramović sought to re-evoke the energy of extreme bodily pain, using a large petroleum-drenched star, which the artist lit on fire at the start of the performance. Rhythm 2, 1974[edit] Art world[edit]

Beautiful Life - design news, beautiful art and luxury lifestyle - Part 17 - موزيلا فَيَرفُكس You’ve already seen cute “Marina’s Bird” lamps and creative floor lamp “Daiana” . This time you will see lamp and stool at the same time. Called “Stoo(L)amp” it was created by American designer Kristen Smith from DSGN-PRJKT studio . Continue Reading Today we want to show you another great example of pencil art. This conceptual white house called “Wave House” is an incredible concept by Gunes Peksen , designer from Istanbul, Turkey. Today we want to show you amazing collection of stamps. This end-of-the-world survival kit was crafted and designed in Mexico by Menosunocerouno . This modern is inspired by and looks like a banana. We have earlier seen some of interesting models of e-bikes like Electric Bike PiCycle LTD by Pi Mobility . The Norwegian Wild Reindeer Center Pavilion is located in Dorve, Norway.

Shock Factor: Controversial art throughout history Art indubitably has the power to shock. Throughout history audiences have been scandalized, disturbed, offended, and downright outraged by art that was socially, politically, and religiously challenging. In this post I will explore some of the most infamous examples of controversial art throughout history; from Manet to Ai WeiWei the artist will undoubtedly remain a powerful provocateur of society. Ai Weiwei, Study in Perspective series from 1995 to 2003 and captured his defiant middle finger in front of seats of political or cultural power in Paris, Washington DC, Berlin, Beijing and Hong Kong Olympia: When first exhibited at the Paris Salon in 1865 this painting caused shock and astonishment. Edouard Manet, Olympia, 1863, oil on canvas John Singer Sargent, Madame X (Madame Pierre Gautreau), 1884, oil on canvas Pablo Picasso, Les Demoiselles D’Avignon, 1907, oil on canvas Marcel Duchamp, Fountain, 1917, ceramic Robert Mapplethrope, John N.Y.C., 1978, from ‘X Portfolio’ After: Like this:

Adam Taylor Shoots Surfrider Campaign Adam Taylor has wowed us once again with the most recent Surfrider Foundation campaign shot on location in Australia and New Zealand. If you’re not familiar with the Surfrider Foundation, it is a wonderful non-profit that works to protect and preserve the world’s oceans, waves, and beaches. See some of the powerful images below that help bring attention to our beautiful oceans: For more information about any of the Glasshouse photographers or for portfolio requests, please contact Jai-Lee Egna Photo Agent, Glasshouse Assignment 212-462-4538 jai-lee@glasshouseassignment.com Like this: Like Loading...

Create A Grisly Zombie Illustration With A Pen Tablet In Illustrator | Vectips - موزيلا فَيَرفُكس Halloween is almost here, and I’m sure some of you need to do some last minute graphics for a client project or maybe so graphics for your Halloween party. So in this intermediate tutorial you will learn how to create a zombie illustration with a pen tablet from a photo. Have fun utilizing the Blob Brush and Eraser tool in recreating this tutorial or apply these techniques to other ghoulish illustrations! Final Image Below is the final zombie illustration we will be working towards. Tutorial Details Program : Adobe Illustrator CS4 (This tutorial use the Blob Brush, a tool specific to CS4. Step 1 First, you need to find a scary or angry portrait to trace. Step 2 Create a new document in Illustrator, go File > Place, navigate to the folder with your image, and click the Place button. Step 3 Once placed, use the Selection tool (V) and scale the image to your desired size. Step 4 For tracing the image. Step 5 Now that we have our Blob Brush (Shift + B) settings, we can start tracing the image.

What zoo captivity looks like around the world Zoos are one of the more ethically dodgy areas for conservationists and animal lovers. On the one hand, there are many zoos doing amazing work, acting as the last refuge and hope for critically endangered species, and as a place of education and engagement for people learning about wildlife and the need for conservation around the globe. They care about their animals and do everything possible to provide enriching and healthy enclosures. The plight of captive animals getting the care and living environment they need is one that quite a few conservation photographers have taken on to varied degrees. These real, emotionally compelling -- simply heartbreaking -- photos that tell a single story: this is what captivity too often looks like, even in countries where we wouldn't expect such dire conditions. © Gaston Lacombe © Gaston Lacombe Lacombe tells me, "These images were taken on five continents, in nine countries, including the USA and Canada. Lacombe's images have a purpose to be sure.

Walker Werbeagentur Zurich's campaign for Amnesty International Click image to Zoom With the use of powerful photography and well-placed billboards, this smart campaign aims to show people what is going on in the world, even if it's not happening in front of them on their street or at their train stop.