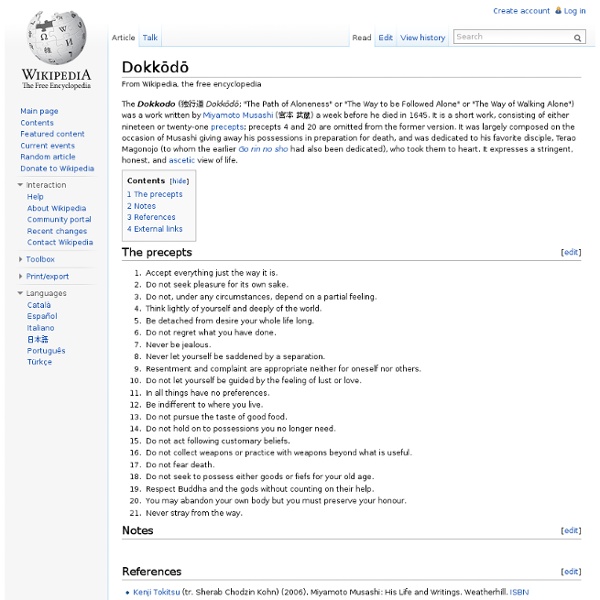 The "Dokkōdō" [ (Japanese: 独行道?); "The Path of Aloneness", "The Way to Go Forth Alone", or "The Way of Walking Alone"] is a short work written by Miyamoto Musashi (宮本 武蔵) a week before he died in 1645. It consists of either nineteen or twenty-one precepts; precepts 4 and 20 are omitted from the former version. "Dokkodo" was largely composed on the occasion of Musashi giving away his possessions in preparation for death, and was dedicated to his favorite disciple, Terao Magonojō (to whom the earlier Go rin no sho [The Book of Five Rings] had also been dedicated), who took them to heart. "Dokkōdō" expresses a stringent, honest, and ascetic view of life. Precepts[edit] References[edit]

List of symbols This is a list of graphical signs, icons, and symbols. Languages[edit] Many (but not all) graphemes that are part of a writing system that encodes a full spoken language are included in the Unicode standard, which also includes graphical symbols. See: Sex Tips to Turn Her On: Mens Health Most bedroom problems boil down to this: Men are microwaves and women are slow cookers. With men, all you have to do is push a few buttons and we"re hotter than a habanero. But with women, it"s an all-day process. You have to buy the ingredients, mix them together, and then put everything in the pot and let it simmer . . . and simmer . . . and simmer. That"s why we"re offering a microwave mentality for the Crock-Pot reality: quick, easy things you can do to make her heating speeds better match yours. Our suggestions take anywhere from a few seconds to a few minutes.

The Best Science Fiction Books (According to Reddit) Recently, someone asked Reddit for a list of the best science fiction books of all time. Being a fan of sci-fi, and wanting to expand my own reading list, I thought it would be helpful to tally the results and preserve them here for future reference. I've also included selected quotes from the comments, as well as my own notes on the books I've already read. PS: All book images in this post are copyright Amazon, and were retrieved using my Big Book Search Engine. So, without further ado, here are the Greatest Sci-Fi Books of All Time, ordered by upvote count: Operation Nifty Package Operation Nifty Package was a United States Navy SEALs-operated plan conducted in 1989 designed to capture Panamanian leader Manuel Noriega. When Noriega took refuge in the Holy See Apostolic Nuncio (diplomatic quarter), deafening music and other psychological warfare were used to convince him to exit and surrender himself. The United States claimed that after ten days of psychological harassment, Papal ambassador Monsignor Laboa had threatened to revoke Noriega's sanctuary if he didn't surrender to the United States, although Laboa insisted that he had made no threats of revoking the right of asylum under the Church, but had used his own "precisely calibrated psychological campaign" to force Noriega's departure.[1]

Journal of Non-lethal Combatives: Cpt. Smith, jujutsu 4 Journal of Non-lethal Combatives, Oct 2000 By Captain Allan Corstorphin Smith, U.S.A. Winner of the Black Belt, Japan, 1916. Self-concept One's self-perception is defined by one's self-concept, self-knowledge, self-esteem, and social self. One's self-concept (also called self-construction, self-identity, or self-perspective) is a collection of beliefs about oneself[1][2] that includes elements such as academic performance,[3][4][5][6][7] gender roles and sexuality,[8][9][10] and racial identity.[11] Generally, self-concept embodies the answer to "Who am I?".[12] One's self-concept is made up of self-schemas, and their past, present, and future selves. Self-concept is made up of one's self-schemas, and interacts with self-esteem, self-knowledge, and the social self to form the self as whole.

Black Mirror / rorriM kcalB Getting laser hair removal services in Kansas City MO is a great way to save on shaving products and finally get the smooth skin you always wanted. However, laser hair removal is expensive and there are a few risks you need to know about. It is best to do some research on laser hair removal Baltimore clinics before you decide to go ahead with this procedure. First of all, do not let aggressive marketing campaigns and low prices guide you in your decision.

Total Art Spaghetti – 狭間 // Cohana [2009] Well... This is a quite sad and happy way of life. A deep way of the soul. This life is death. But under one of Buddhist views, death is just the ultimate 'realization' of our belonging of the whole as a being. by lynks Jun 5