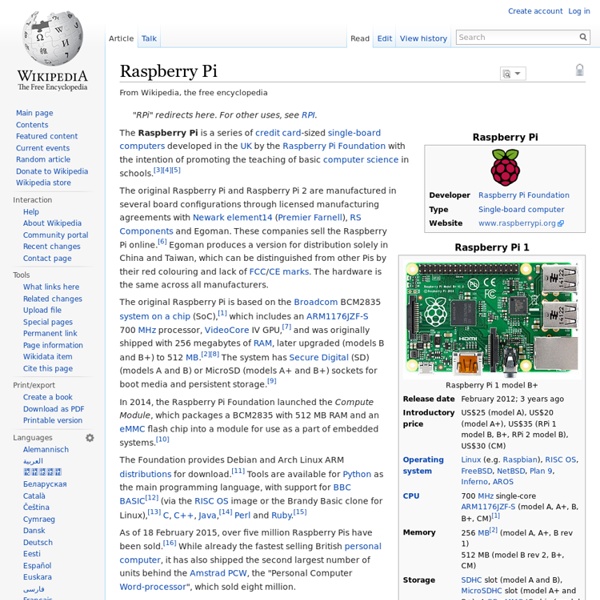 The Raspberry Pi is a series of credit card-sized single-board computers developed in the UK by the Raspberry Pi Foundation with the intention of promoting the teaching of basic computer science in schools.[3][4][5] The original Raspberry Pi and Raspberry Pi 2 are manufactured in several board configurations through licensed manufacturing agreements with Newark element14 (Premier Farnell), RS Components and Egoman. These companies sell the Raspberry Pi online.[6] Egoman produces a version for distribution solely in China and Taiwan, which can be distinguished from other Pis by their red colouring and lack of FCC/CE marks. The hardware is the same across all manufacturers. In 2014, the Raspberry Pi Foundation launched the Compute Module, which packages a BCM2835 with 512 MB RAM and an eMMC flash chip into a module for use as a part of embedded systems.[10] Hardware[edit] Processor[edit] Performance of first generation models[edit] Overclocking[edit] RAM[edit] Networking[edit] Peripherals[edit]

Gav's World : Raspberry Pi : Car Media Server Raspberry Pi Car Media Server [gav-pi2] It was extremely simple to set up... eventually... once I'd battled with RaspBMC for a couple of nights (it's too constrained to do a particular job - although it does it very well) and switched to Raspbian... The thick yellow (orange externally), red and black wires carry +12V, +12V (accessory) and GND from the car. FAQs Table of Contents: The Raspberry Pi is a credit-card-sized computer that plugs into your TV and a keyboard. It is a capable little computer which can be used in electronics projects, and for many of the things that your desktop PC does, like spreadsheets, word processing, browsing the internet, and playing games. It also plays high-definition video. We want to see it being used by adults and children all over the world to learn programming and digital making. You can read more about the Raspberry Pi here.

Raspberry Jam at Milton Keynes – National Museum of Computing – Gertboard Demo Rig Yesterday I went to my first Raspberry Jam – a get-together of Raspberry Pi enthusiasts. This one was in Milton Keynes at the National Museum of Computing. It happened to be run by Peter Onion, who I already knew from the world of aeromodelling. So it was a no-brainer for me to go to… meet an old friend (he’s not that old)visit a museum of computersget to talk to people about the Raspberry Pi and Gertboard and demonstrate themsee what other people are doing with the Pi (nobody else had a Gertboard – ner ner nee ner ner :p ) View topic - [Tutorial] In-Car Raspberry with Wifi Access point - DWA-121 My car is a Renault Espace with integrated screens at the back of the headrests (infrared transmitter for the sound to headsets) with a DVD Player and an extra RCA audio/video input. Since I was bored with kids battles choosing cartoons from old DVDs I decided to use a Raspberry Pi together with Raspbmc as a media center. Everything had to be powered from the cigar lighter receptacle...

Setting up a VM for Raspberry Pi development using Virtualbox, Scratchbox2 & qemu (Part 1) « Executing Gummiworms Last week I released version 0.2 of the Raspberry Pi development VM and I thought that I could safely call it a day because in a few weeks the Raspberry Pi hardware will be available and therefore we will no longer need the VM for software development. So yesterday I announced on this blog and the Raspberry Pi forums that I had decided to EOL the VM and would no longer be updating it as I didn't see the need and i'm not going to have the time to maintain it for the next few months as it takes about 12 to 14 hours to create, configure and upload, 8 to 10 hours of that is uploading using all my upstream bandwidth which is no longer feasible for me to do again until after June. However, almost immediately after posting that I started to receive tweets and PM's asking me not to stop working on the VM or to at least write detailed instructions on how to create your own VM for Raspberry Pi (or other ARM based devices) from scratch. This ends part one.

Build your own DIY Roomba-style robot vacuum cleaner The CleanBOT: a DIY autonomous floor cleaning robot Do you want a DIY service robot able to clean the floor of your house? The Instructables user MosfetN shows you what you need and how to build a cheap vacuum cleaner. In other words, you can build at home a robot with almost all features of a Roomba vacuum cleaner. The designer says that the CleanBOT is a robot vacuum cleaner featured to work in two different ways: vacuum or active mop. Programming Raspberry Pi Nearly all of the fuss about the low-cost Raspberry Pi computer's hardware has died down and we finally have some details of its software that is easy enough for the rest of us to follow. So what can you do with it out of the box? Dr Eben Upton, founder of the Raspberry Pi Foundation, has just posted some easy-to-follow details of how to get started programming the Raspberry Pi. It was initially a webinar but if you missed it then you can download the information as a PDF - but be warned there is some strange formatting and repetitions due to the change in presentation format.

Raspberry Pi Want to receive a weekly email containing the scoop on our new titles along with the occasional special offer? Just click the button. (You can always unsubscribe later by editing your account information). Give us an email and a password (you can use the password later to log in and change your preferences). We'll send you a newsletter roughly once a week. The chart shows the approximate number of words in each chapter of Raspberry Pi per week.

GreenPiThumb: A Raspberry Pi Gardening Bot - mtlynch.io Introduction This is the story of GreenPiThumb: a gardening bot that automatically waters houseplants, but also sometimes kills them. The story begins about a year ago, when I was struck by a sudden desire to own a houseplant. A plant would look nice, supply me with much needed oxygen, and imply to guests that I’m a responsible grown-up, capable of caring for a living thing. But I’m a programmer, not a gardener. R-Pi NAS Back to RPi Guides. Raspberry Pi Network Attached Storage This project configures your Raspberry Pi to share files with any other computer on your local network. You can add a large hard disk to the RPi and use this to store your important files/photos/videos in a central location.