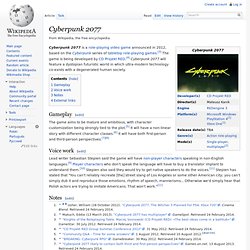 Gameplay[edit] The game aims to be mature and ambitious, with character customization being strongly tied to the plot.[5] It will have a non-linear story with different character classes.[6] It will have both first-person and third-person perspectives.[7][8] Voice work[edit] Notes[edit] External links[edit] Official website. 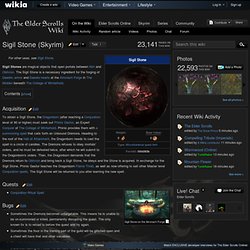 Acquisition Edit Quests Conjuration Ritual Spell Bugs Sometimes the Dremora becomes untargetable. Appearances sigil stone 26 messages it is a nice decorative item though, if you can stop it rolling around and spawning back wher it was droped Yea i don't put it on a display, i just put it in a chest and forget about it because of that reason lol. Science & Environment - Why video games may be good for you. Games have long been accused of making players violent, but evidence has been building over the years that they can have positive effects. 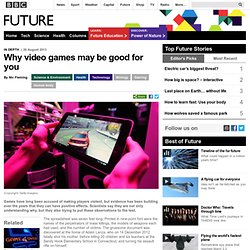 Scientists say they are not only understanding why, but they also trying to put these observations to the test. The spreadsheet was seven feet long. Printed in nine-point font were the names of the perpetrators of mass killings, the models of weapons each had used, and the number of victims. The gruesome document was discovered at the home of Adam Lanza, who on 14 December 2012 fatally shot his mother, before killing 20 children and six teachers at the Sandy Hook Elementary School in Connecticut, and turning his assault rifle on himself. It took only a few hours for the authorities to link the massacre to Lanza’s playing of violent video games.

The Weekend Modder's Guide: Skyrim (2012) This week, I'm not going to be talking about an older game. 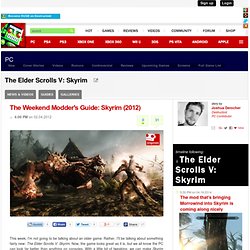 Guide:NVIDIA Inspector. Make Skyrim look amazing using over 200 mods. It's been over a year since The Elder Scrolls V: Skyrim was first released, and the modding community has been feverishly working at creating content for this magnificent game. 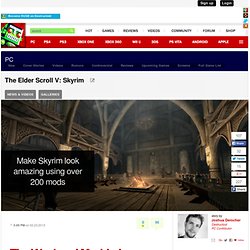 I already covered Skyrim after it was released, but most of those mods are already outdated. So let's take a look at how awesome we can make the game look now. Getting a lot of mods to work together can be a tedious project. Thankfully, there is the Skyrim Total Enhancement Project (STEP), which is an excellent project that gives very detailed instructions on how to install an insane amount of mods in the correct order.

They take the time to test everything and make sure it works and just launched a detailed wiki which guides you through the install process. The STEP guide currently includes 215 mods, all of which help breathe new life into Skyrim. Think of this as a guide to using a guide. STEP is meant to give you a better-looking copy of Skyrim that will still run at 60 frames per second. (Footprints!) 1. 2. 3. Bioshock Infinite DLC Trailer: 'Burial At Sea' Will Take Players Back To Rapture. Bioshock Infinite was one of 2013's best games - and probably one of the very best ever made (whatever timeline you happen to be living in, cough). 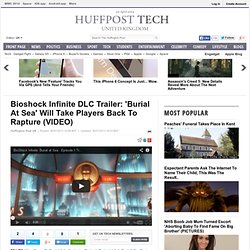 So the news that you're soon going to be heading back to the floating city of Columbia for some brand-new DLC is surely going to be rapturously received by fans. The combat-focused 'Clash In The Clouds' is available today via Steam and Xbox Live, for £3.69 or 400 Xbox points. Eve players stage giant online space battle. 29 July 2013Last updated at 07:05 ET Space battles are a fact of life in Eve Online One of the largest video game space battles ever seen has taken place in the Eve Online game. 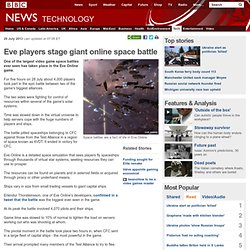 For five hours on 28 July about 4,000 players took part in the epic battle between two of the game's biggest alliances. The two sides were fighting for control of resources within several of the game's solar systems. Time was slowed down in the virtual universe to help servers cope with the huge numbers of players and ships. The battle pitted spaceships belonging to CFC against those from the Test Alliance in a region of space known as 6VDT. Eve Online is a detailed space simulation that sees players fly spaceships through thousands of virtual star systems, seeking resources they can use to prosper.

The resources can be found on planets and in asteroid fields or acquired through piracy or other underhand means. Ships vary in size from small trading vessels to giant capital ships.

The 5 Most Insane Things Ever Accomplished in a Video Game. #2. 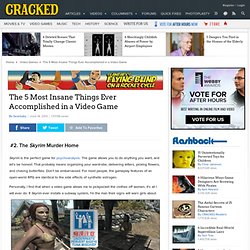 The Skyrim Murder Home Skyrim is the perfect game for psychoanalysis. The game allows you to do anything you want, and let's be honest: That probably means organizing your wardrobe, delivering letters, picking flowers, and chasing butterflies. 5 Incredible Real Video Games (You'll Never Get to Play) Gamers tend to get more excited about the titles they're promised for the future than the ones that are actually available for purchase right now. 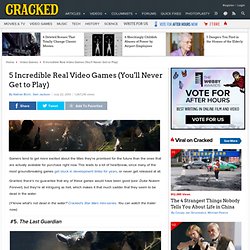