PC® Insurance. All coverage is subject to the terms and conditions, limitations and exclusions of your policy or certificate of insurance. 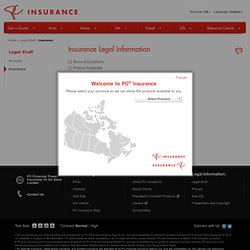 Read this notice before using this Web site. By accessing and browsing this Web site you accept, without limitation or qualification, these terms and conditions. In these terms and conditions, any reference to "we", "us", or "our" refers to either PC Financial Insurance Agency Inc. (for travel and pet insurance) or to PC Financial Insurance Broker Inc. (for home and auto insurance). Product and Website Availability The products described in this Web site are available only in selected provinces and territories in Canada and only where they may lawfully be sold. Information Accuracy All information on this Web site, including quotations and information relating to premiums is subject to change without notice. We may change, modify, add or remove portions of these terms and conditions of use at any time. Personal Banking Frequent Asked Questions (FAQs) Call us toll-free at 1-88-88-724-724. go to Apply online Come into one of our go to pavilions and talk to a helpful Personal Banking Representative. 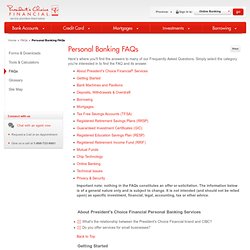 To open a President’s Choice Financial personal deposit account at a pavilion, you will need to present: 1.Two pieces of identification from those listed in the acceptable identification list below, with at least one piece from Type A of the list, or 2. ScorCard™ REVIEWS >> 2012 ONLINE BANKING REVIEW ] 2014 - Canadian Online Banking scorCard Review For the fourth straight period, RBC Royal Bank has been named the best online banking services in Canada as measured by Surviscor’s Online Banking scorCard, a comprehensive, objective annual assessment of online features and functionality at major Canadian banking institutions. 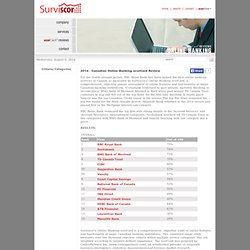 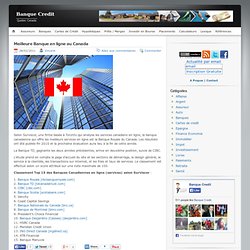 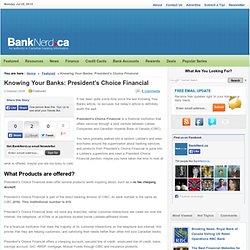 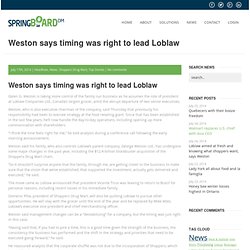 Weston is taking more control of the family run business as he assumes the role of president at Loblaw Companies Ltd., Canada’s largest grocer, amid the abrupt departure of two senior executives. Weston, who is also executive chairman of the company, said Thursday that previously his responsibility had been to oversee strategy at the food retailing giant. Since that has been established in the last few years, he’ll now handle the day-to-day operations, including opening up more communication with shareholders. “I think the time feels right for me,” he told analysts during a conference call following the early morning announcement. Weston said his family, who also controls Loblaw’s parent company, George Weston Ltd., has undergone some major changes in the past year, including the $12.4-billion blockbuster acquisition of the Shoppers Drug Mart chain. Domenic Pilla, president of Shoppers Drug Mart, will also be quitting Loblaw to pursue other opportunities.

“Although Mr. InShare0. Leadership secrets of Loblaw's invisible man. He’s such a rock star among Britain’s elite that one influential newspaper calls him “the best-connected man in the business world.” 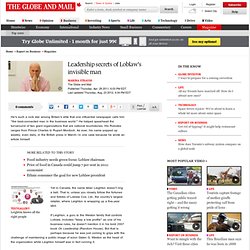 He helped spearhead the turnaround of two giant organizations that are national touchstones. His Rolodex ranges from Prince Charles to Rupert Murdoch. As ever, his name popped up weekly, even daily, in the British press in March—in one case because he wrote an article himself. Yet in Canada, the name Allan Leighton doesn’t ring a bell. That is, unless you closely follow the fortunes and foibles of Loblaw Cos. If Leighton, a guru to the Weston family that controls Loblaw, includes “keep a low profile” as one of his business rules, he doesn’t mention it in his bold 2007 book On Leadership (Random House).

Now, as Leighton prepares for a departure this summer or fall, he’s in danger of leaving the country before he’s even been properly introduced. "The mind is best trained in adversity. He faced his match at Loblaw, though. Www.raymondjames.ca/en_ca/equity_capital_markets/equity_research/sample_research/docs/Loblaw Companies Ltd. 011612.pdf. Coriolis_understanding_loblaws.pdf. Www.coriolisresearch.com/pdfs/coriolis_understanding_loblaws.pdf. Lcl04_aif_en.pdf. Www.loblaw.ca/files/doc_financials/lcl04_aif_en.pdf. Barry Columb: Executive Profile & Biography. As of 3:07 PM 07/23/14 All times are local (Market data is delayed by at least 15 minutes). 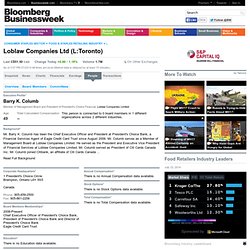 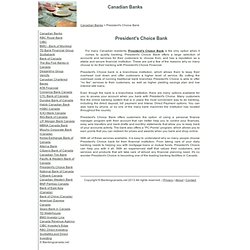 No-Fee Chequing Account from Citizens Bank. While there is healthy competition with many players offering high-interest savings accounts at attractive interest rates and features, President’s Choice Financial is pretty much the only game in town if you want a no-fee chequing account. 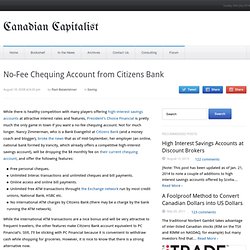 Not for much longer. Nancy Zimmerman, who is a Bank Evangelist at Citizens Bank (and a money coach and blogger), broke the news that as of mid-September, her employer (an online, national bank formed by Vancity, which already offers a competitive high-interest savings account), will be dropping the $8 monthly fee on their current chequing account, and offer the following features: Free personal cheques.Unlimited Interac transactions and unlimited cheques and bill payments.Online access and online bill payments.Unlimited free ATM transactions throught the Exchange network run by most credit unions, National Bank, HSBC etc.No international ATM charges by Citizens Bank (there may be a charge by the bank running the ATM network).

TD partners with Loblaw on Ugo mobile wallet. PC Financial and TD Canada Trust credit card-holders will soon be able to leave their cards at home and pay for groceries with their mobile phones. The two financial institutions say they will launch Ugo, a mobile wallet that lets users pay and collect PC Points at Loblaw-owned stores with just a tap of their Android or BlackBerry device, effective Spring 2014. “We are excited to be teaming up with PC Financial to develop Ugo, the first collaboration of its kind between two Canadian banks,” said TD’s Teri Currie in a press release issued Wednesday. “We’re also thrilled to be able to offer one of Canada’s most popular retail loyalty programs by welcoming Loblaw as our first retail partner.” Initially, Ugo users will only be able to load their TD Visa, PC Financial MasterCard and PC Points cards into the mobile wallet. However, eventually the plan is to allow Ugo users to add debit capabilities and bring other retailers and loyalty programs into the fold.

Amicus Bank. Amicus Bank was a wholly owned subsidiary of CIBC which provided non-traditional banking to customers. Within Canada, Amicus Bank was primarily responsible for operating President's Choice Financial. Amicus Bank briefly provided services under its own name through Bell Sympatico's portal. It also took on the operation of non-branch automated banking machines (primarily stand-alone's at services stations, convenience stores) which were co-branded for Amicus Bank and CIBC.

President's Choice Financial was ranked by J.D. Power and Associates as having the highest customer satisfaction among mid-size Canadian banks in 2007, 2008, 2009, 2010, and 2011.[2] The joint venture between Loblaws and CIBC started in 1996. To benefit from its low-cost, "no-fee" structure, clients perform transactions on the Internet, at an ATM, or by telephone. Contexte_Portrait_secteur.pdf. Companies Limited - Careers - Your Career Opportunities - President’s Choice Financial.

Core banking: Through a venture with CIBC, complete banking services are offered to individuals through in-store pavilions and Internet and telephone banking. PC Financial re-launches as a full-service brokerage. Index Funds from PC Financial? No, Thanks. President’s Choice Financial has long been a favourite of frugal Canadians looking for no-fee banking. But until a reader pointed it out to me recently (hat tip to Greg S), I wasn’t aware that the online bank also offers low-cost index funds through its partnership with CIBC. True to its nature as a discount bank, PC Financial even offers investors a rebate of 10 basis points off the funds’ annual management fees.

Which is Better ING Direct or PC Financial: Part Two Cheques, Interest, Overdrafts and Chequing. After we opened a THRiVE chequing account at ING Direct (now Tangerine.ca) and a President’s Choice No Fee Chequing Account we discovered they are not identical. So which is better for our chequing and cheques? I Write a Lot of Cheques. Is ING’s THRiVE or PCF’s No Fee Account Better for Me? I find it a bit amusing to read posts on sites like RedFlagDeals where people brag that they never write cheques and they put all of their purchases on plastic to get points.