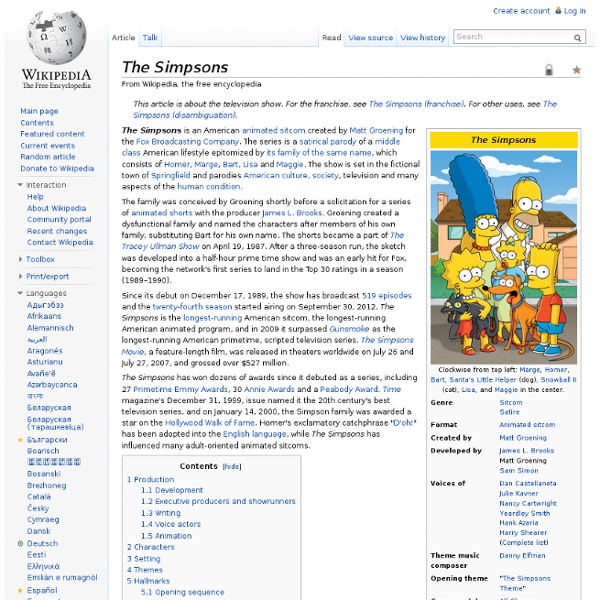 The family was conceived by Groening shortly before a solicitation for a series of animated shorts with the producer James L. Brooks. Groening created a dysfunctional family and named the characters after members of his own family, substituting Bart for his own name. The shorts became a part of The Tracey Ullman Show on April 19, 1987. After a three-season run, the sketch was developed into a half-hour prime time show and was an early hit for Fox, becoming the network's first series to land in the Top 30 ratings in a season (1989–1990). Production Development When producer James L. The Simpson family first appeared as shorts in The Tracey Ullman Show on April 19, 1987. Executive producers and showrunners Matt Groening and James L. Writing Part of the writing staff of The Simpsons in 1992. At the end of 2007 the writers of The Simpsons went on strike together with the other members of the Writers Guild of America, East. Voice actors

Dead Homer Society The War of the Simpsons - v3 - Pretending to Cry - Index Simpson Crazy, the ultimate Simpsons fan site — in association with Krusty Krowd Kontrol Barriers Simpsons Channel | Your Source For Simpsons News 'The Simpsons' Explains Its Provocative Banksy Opening How did “The Simpsons” manage to track down Banksy, the pseudonymous British artist, and get him to create the powerful opening-credit sequence from Sunday’s episode, which seems to reveal the torturous sweatshop responsible for the show’s creation? And how, after all that mockery, have the producers behind that Fox animated series been able to retain their jobs? Al Jean, an executive producer and the longtime show runner of “The Simpsons,” pulled back another layer of the curtain and explained the stunt to ArtsBeat on Monday afternoon. How did you find Banksy to do this, and now that it’s done, how much trouble are you in? Well, I haven’t been fired yet, so that’s a good sign. I saw the film Banksy directed, “Exit Through the Gift Shop,” and I thought, oh, we should see if he would do a main title for the show, a couch gag. Were you concerned that what he sent you could get the show into hot water? I’d be lying if I said I didn’t think about it for a little bit. No, absolutely not.

Change Numbers from Standard Form to Expanded Form with Powers of Ten Okay, I admit it. Nail Art is just totally Cool. If you find yourselves in one of those situations when you have absolutely crap-all to do, attempting some nail art is probably a good idea. I do declare that there are a few rules however! 1) Nothing too fancy. This is not a trend to be taken too seriously but you don’t want it to look like something threw up all over your nails either. If you can do a basic French manicure, I’d stick to something similar to the image above. 2) No long hoochie nails. 3) If you feel confident enough to crack on with some more tricky styles but need some guidelines, check out the video tutorials I’ve provided at the bottom of this post. 4) If you have no frick’n idea what you’re doing, get them done professionally. Images via: WAH, Make-up Savvy, SupaNails, Pinterest Holy mother of Nails!

You Are NOT a freak Blackberry Breakfast Smoothie Share This LinkCopy Supermodel Karlie Kloss loves to eat clean! When she's on the go, Karlie can always be found with a healthy snack like a Kind bar or apple in her purse, and she even partnered with the legendary Momofuku Milk Bar to create a line of all-natural treats — appropriately named Karlie's Kookies. Even when she's not busy with fashion shows and photo shoots ( . . . or cookies), Karlie keeps breakfast simple on her days off. Notes Karlie said that she tosses "banana or blackberries" into her chocolate protein shake, but after trying this blend of fruit together, I decided to add them both to the mix. Ingredients 1 cup unsweetened almond milk 1 scoop chocolate protein powder of your choice (I used a chocolate whey) 1 banana 1 cup blackberries Directions Combine all ingredients in blender, and mix until smooth.Enjoy! Source: Calorie Count Information Category Smoothies, Drinks Yield 1 smoothie Nutrition Calories per serving

Mermaid Nails Share this image Share It Pin It For our trip to Costa Rica, I wanted fun nails that had an almost tropical vibe. I went back to Marie Nails (where I got this glittery combination) and got a bright tangerine color with graduated gold sparkles on just my ring fingers (which you can see here). Share this image {Essie's Mint Candy Apple & Martha Stewart's Aquamarine Glitter} {Paint two coats of the nail polish} {Add top coat along the bottom half of the nail} Share this image {Dip a separate brush into top coat and then into the glitter} {Apply glitter to the bottom half of your nail} {End result} happy coolmathgames.com Jack's dad, Doug