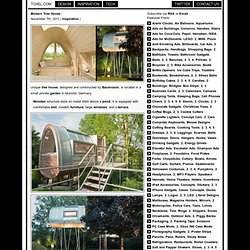 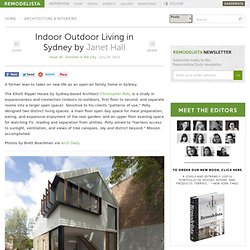 The Elliott Ripper House by Sydney-based Architect Christopher Polly is a study in expansiveness and connection (indoors to outdoors, first floor to second, and separate rooms into a larger open space). Photos by Brett Boardman via Arch Daily. Above: A view of the house from the back. Above, two photos: Generous sliding doors and rows of pivoting windows allow varying degrees of openness and enclosure. Above: The architect added an open stair to "expand the relationship between two previously unrelated floors". 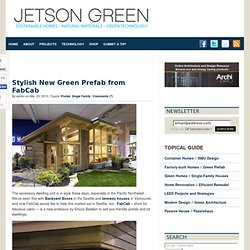 A Gorgeous Cabin In The Forest, Made From The Trees It Displaced. Building an eco-friendly home in the middle of a forest sounds like a paradox: Chances are that in the process you’ll have to cut down some trees. 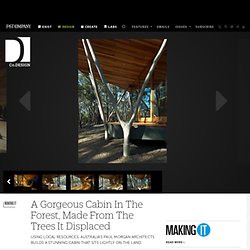 The best solution, of course, is to use them as a source of timber. Which is exactly what Paul Morgan Architects did, using a mixture of remnant and newly harvested wood to construct this wondrous cabin in Victoria’s Central Highlands, in Australia. The 900-square-foot Trunk House was built as a weekend getaway for a married couple with a daughter attending college. “They asked for a small forest cabin in which they could practice choral singing,” according to Paul Morgan. What they got was a round structure with large windows providing views of the lush surroundings and an overhanging roof supported by tree forks made from pieces of wood found on the forest floor joined together with straight columns to form a triangulated truss system. PREFAB FRIDAY: European Influenced Hangar Prefabs. 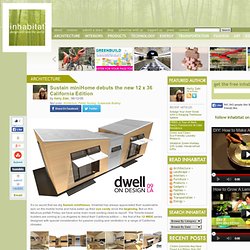 Inhabitat has always appreciated their sustainable spin on the mobile home and have eaten up their eye candy since the beginning. But on this fabulous prefab Friday, we have some even more exciting news to report! The Toronto-based builders are coming to Los Angeles to debut their California edition — the first of the 12 WIDE series designed with special consideration for passive cooling and ventilation in a range of California climates. The California edition features 10-foot ceilings and a larger Master Bedroom than any other 12WIDE models. Sustainably Built Swamp Huts Light Up Like Glowing Lanterns in the Forest.

Keith Moscow and Robert Linn’s initial concept for the Swamp Huts was perpetually rethought and reinvented over nearly two decades. 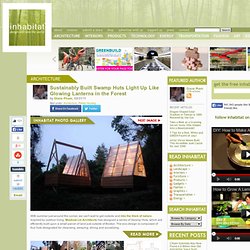 The project has in fact been reincarnated as an Architecture for Humanity competition entry, a disaster housing proposal, an eco-resort lodging plan, and even as a submission to the Boston Society of Architects Unbuilt Architecture Awards. But it wasn’t until Moscow inherited a piece of land in a Boston suburb in 2008 that the duos’ dream finally become a reality. Measuring 580 square feet in total, the Swamp Huts feature a light building footprint with four gabled huts connected by a central wooden deck with a fire pit. Super Low Cost Mima Prefab Homes are Modeled After Minimalist Japanese Architecture. In addition to its glazed shell, the prefab Mima package comes complete with a handful of extra plywood panels that can be used to erect additional walls according to each person’s taste. 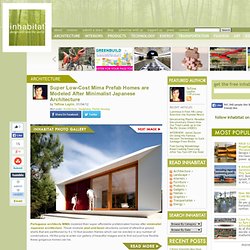 These walls can be installed outside in order to permit or block solar gain as needed, or inside to create mini-rooms . Not only that, but it is possible to get panels that have two different colors on either side of them such that a simple rotation could completely alter the ambience or style of a room. Made from prefabricated construction materials off site, the Mima is both affordable and extraordinarily easy and quick to install. Our friends over at CubeMe point out that the home resembles the Japanese ken, which mixes and matches screens, panels, and mats that are assembled or disassembled with great efficiency throughout Japan. 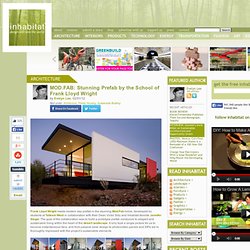 The goal of the collaboration was to build a prototype prefab conducive to elegant and sustainable living within the heart of the desert landscape. It only took a single picture for us to become instantaneous fans, and from passive solar design to photovoltaic panels and SIPs we’re thoroughly impressed with the project’s sustainable elements. The Mod.Fab prefab runs a modest 960 feet and currently stands nearly completed on the campus grounds at the Frank Lloyd Wright School of Architecture Taliesin West, located just outside of Phoenix, AZ.

David Hill and In Situ Studios Propose Gorgeous Affordable Alley Homes in Raleigh. There are many things to love about the slow-paced, old fashioned South, but zoning laws are not one of them. 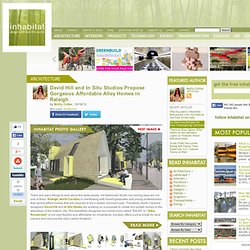 Raleigh, North Carolina is overflowing with recent graduates and young professionals that cannot afford homes that are required to be a certain minimum size. Thankfully, North Carolina designers David Hill and In Situ Studio are working on a proposal to create tiny prefab homes in the alleyways of the historic city. Eco-Resort Pedras Salgadas by Diogo Aguiar and Luís Rebelo de Andrade. These seven woodland cabins are nestled amongst the trees of a park and spa in northern Portugal (+ slideshow). 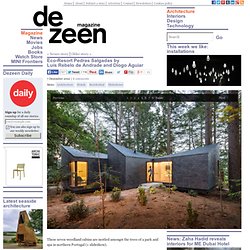 Designed by Portuguese architects Luís Rebelo de Andrade and Diogo Aguiar, the huts offer a peaceful retreat for guests visiting the park, which is located on the edge of the spa-town of Pedras Salgadas. "Knowing that we had a responsibility to build tourist accommodation in one of the most beautiful parks in the country, we took maximum care to have a minimal effect on the local nature," Diogo Aguiar told Dezeen.