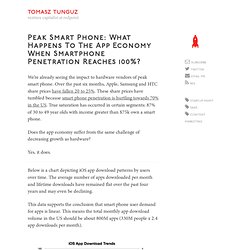 Over the past six months, Apple, Samsung and HTC share prices have fallen 20 to 25%. App Downloads. Overstating the Consumerization of IT. Marco Arment, in Underscore Price Dynamics: This is the real reason why Apple doesn’t care about upgrade pricing: there’s no demand from customers. 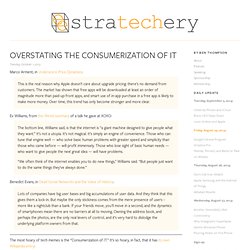 The market has shown that free apps will be downloaded at least an order of magnitude more than paid-up-front apps, and smart use of in-app purchase in a free app is likely to make more money. Why the File System Wars Will Trigger a Wave of Consumer M&A. You fool! 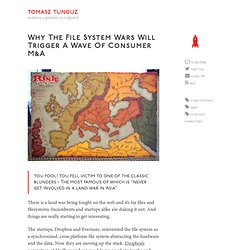 You fell victim to one of the classic blunders - The most famous of which is “never get involved in a land war in Asia” There is a land war being fought on the web and it’s for files and filesystems. Stalking the Billion-Footed Mobile App Developer Beast. One of the primary cues I used two years ago when going short RIMM was the sliding developer interest in the Blackberry platform. 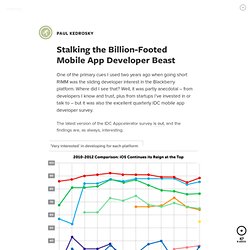 Tablets: the third platform. It’s easy to call a tablet a larger a mobile phone. 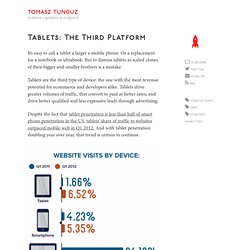 Or a replacement for a notebook or ultrabook. But to dismiss tablets as scaled clones of their bigger and smaller brothers is a mistake. Tablets are the third type of device: the one with the most revenue potential for ecommerce and developers alike. Tablets drive greater volumes of traffic, that convert to paid at better rates, and drive better qualified and less expensive leads through advertising. Despite the fact that tablet penetration is less than half of smart phone penetration in the US, tablets' share of traffic to websites outpaced mobile web in Q1 2012. More impressively, overall tablet users' conversion rates are twice as strong as mobile phones and 20% better than PCs. Windows market share vs Post PC devices. Mobile OS trends in five charts. In May 2010, I bet a good friend of mine that Android would overtake iOS in total devices shipments in 12 months' time. 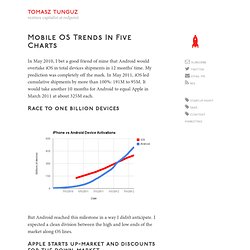 My prediction was completely off the mark. In May 2011, iOS led cumulative shipments by more than 100%: 191M to 95M. It would take another 10 months for Android to equal Apple in March 2011 at about 325M each. Race to one billion devices. Global PC Shipments Expected to Decline in 2012. My Product Feedback. It’s obvious, right? 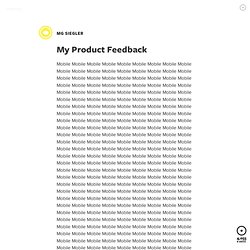 I’m hardly the first person to point this out. And yet, I still meet so many startups who are focusing on the desktop/laptop-based web first. Mint.com Tops 10 Million Registered Users, 70% Come From Mobile Vs. Web. Mint.com, a financial planning app that was a TC40 winner and acquired by Intuit in 2009, has just announced it has surpassed 10 million registered users. 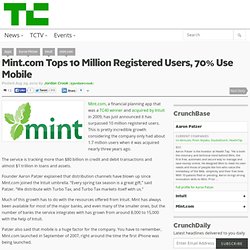 This is pretty incredible growth considering the company only had about 1.7 million users when it was acquired nearly three years ago. You’ve probably underestimated just how big this is. I met a team at a mobile dev shop a couple of weeks ago and in the discussion I casually mentioned that mobile app usage exceeds web usage. 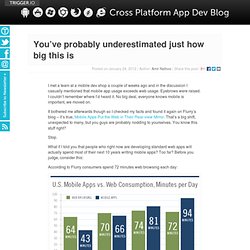 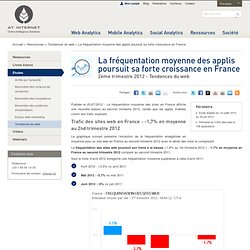 Two Thirds of New Mobile Buyers Now Opting For Smartphones. Mobile Is Where The Growth Is. If you look at any of the top web properties on comScore, Quantcast, Alexa or any other third party reporting service you will see that they all have been fairly flat over the first half of the year. You might think that all these big web services are flatlining. We have seen this in our portfolio too. From board meeting to board meeting, we are seeing a similar pattern. Usage Statistics. Mobile Use Grows 115% in 2013, Propelled by Messaging Apps Posted by Simon Khalaf on Mon, Jan 13, 2014 In November 2013, Benedict Evans, a well-respected and widely followed analyst, shared an updated version of his famous slide deck called “Mobile is Eating the World”.

This deck quickly made the rounds on social media and was highly referenced by industry and financial analysts who cover mobile. Think we’re moving past the PC? Ask the PC makers. The latest sales numbers for PCs are in, and they are not good. Worldwide PC sales amounted to 86.7 million for the second quarter of 2012, which means they shrank by 0.1 percent compared to a year ago, according to IDC’s latest calculations, published Wednesday. Shift from PC to mobile faster than expected. [Update: typo in title corrected] Mobile is growing partly because it is expanding our use of computing and partly at the expense of desktops and laptops.

PC sales data out yesterday shows that PC substitution, the second the driver of growth, is happening faster than expected. Building and dismantling the Windows advantage. When the Macintosh was launched in 1984, computers running the MS-DOS operating system were nearing a dominant position in the market. Having launched in 1981 as the IBM PC, they were quickly cloned and four years later “PCs” were selling at the rate of 2 million/yr.