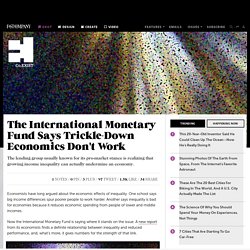 One school says big income differences spur poorer people to work harder. Another says inequality is bad for economies because it reduces economic spending from people of lower and middle incomes. Now the International Monetary Fund is saying where it stands on the issue. A new report from its economists finds a definite relationship between inequality and reduced performance, and, what's more, it gives numbers for the strength of that link. "If the income share of the top 20% (the rich) increases, then GDP growth actually declines over the medium term, suggesting that the benefits do not trickle down. The paper looks at 159 advanced and developing economies between 1980 and 2012, investigating how income is distributed in each society and its level of national growth.

The IMF is known for sometimes forcing countries into "pro-market reforms" in return for its loans.

Sorting. Martin Scorsese's Film School: The 85 Films You Need To See To Know Anything About Film. Interviewing Martin Scorsese is like taking a master class in film. 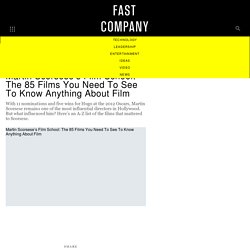 Fast Company’s four-hour interview with the director for the December-January cover story was ostensibly about his career, and how he had been able to stay so creative through years of battling studios. But the Hugo director punctuated everything he said with references to movies: 85 of them, in fact, all listed below. Some of the movies he discussed (note: the descriptions for these are below in quotes, denoting his own words). Others he just mentioned (noted below with short plot descriptions and no quotes). Occupy Wall Street and “The American Autumn”: Is It a “Colored Revolution”? Part I by Michel Chossudovsky Global Research, October 13, 2011 There is a grassroots protest movement unfolding across America, which includes people from all walks of life, from all age groups, conscious of the need for social change and committed to reversing the tide. The grassroots of this movement constitutes a response to the "Wall Street agenda" of financial fraud and manipulation which has served to trigger unemployment and poverty across the land.

Does this movement constitute in its present form an instrument of meaningful reform and social change in America? Brian Willson: THE PRETEND SOCIETY. I was once a young man, very much like the young men and women who have gone to Iraq and Afghanistan as US military soldiers. 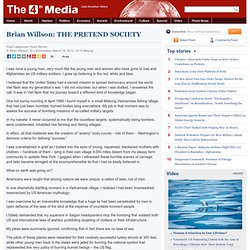 I grew up believing in the red, white and blue. I believed that the United States had a sacred mission to spread democracy around the world. Viet Nam was my generation’s war. What's the Best Way to Break Society's Bad Habits? - Room for Debate. Lo-20120109c.pdf (application/pdf Object) 2006_04.pdf (application/pdf Object) Occupy the US: Musings on Horizontal Decision-Making and Bureaucracy. | Marianne Maeckelbergh | The year 2011 has breathed new life into horizontal models of democratic decision-making. 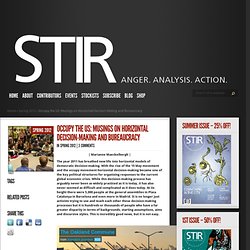 With the rise of the 15 May movement and the occupy movement horizontal decision-making became one of the key political structures for organising responses to the current global economic crisis. Community health centers. Energy Psychology Therapy. Top 10 Legal Rights and Issues Everyone Should Know About. Soldering 101: Lesson 1: Tin the Tip. The Ranger Station - Your Ultimate Ranger Resource. HOMEMADE OUTDOOR GEAR. Fishing, Boating, Climbing, Scouting, Search and Rescue, Household, Decorative, Rope Care, How To Build The Only Five Campfires You’ll Ever Need. Suturing Introduction Through Videos. Dream it – Design it – Build it. 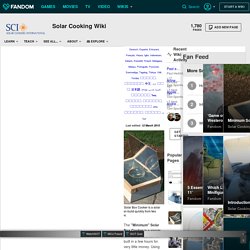 When we designed this cooker, we named it the "Minimum Solar Box Cooker" because, at the time, it represented the simplest design we could devise. What we didn't communicate with that name was that this is a full-power cooker that works very well, and is in no way minimum as far as its cooking power goes.

What You Will Need Two cardboard boxes. We would suggest that you use an inner box that is at least 38 cm x 38 cm (15 inch x 15 inch), but bigger is better. Building the Base. How To Turn A Beer Can Into The Only Camping Stove You’ll Ever Need. You can whip one of these up in a matter of minutes. 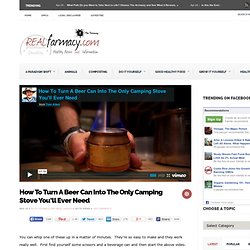 They’re so easy to make and they work really well. First find yourself some scissors and a beverage can and then start the above video. This is an inexpensive way to be prepared in the event of a power outage as these stoves give off a lot of heat and have the ability to cook large meals. They also make great holiday gifts for friends and family. For more great repurposing ideas, check out Repurposing 24/7 Image: Vimeo camp stoveDIYRepurposing Related Posts. Make a hobo tin-can portable rocket stove + class. If adorably quirky perky BBC gardener Alys Fowler can scavenge veggies to throw in her various garden allotment campfire contraptions, well then, so can I. 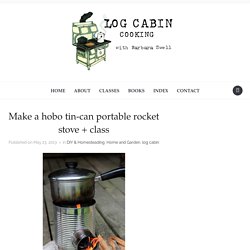