11 Simple Ways to Improve Your Memory 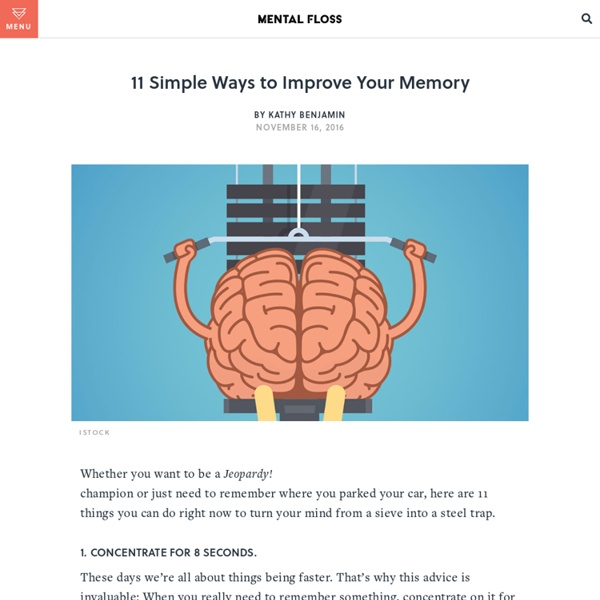 Whether you want to be a Jeopardy! champion or just need to remember where you parked your car, here are 11 things you can do right now to turn your mind from a sieve into a steel trap. These days we’re all about things being faster. That’s why this advice is invaluable: When you really need to remember something, concentrate on it for at least 8 seconds. That can seem like a long time when you're running around trying to get a million things done, but it is worth it. Studies have shown that 8 seconds is the minimum amount of time it takes for a piece of information to go from your short-term memory to your long-term memory. We’ve all walked into a room and suddenly realized we can’t remember why we needed to be there in the first place. If you’re having trouble remembering things at work, get a stress ball. At this point we should just accept it that science considers exercise the cure for absolutely any problem, and memory is no different. We’re all font snobs to some extent. Related:  Anglais ressources

The Strange Case of the Woman Who Can’t Remember Her Past—Or Imagine Her Future Spend enough time with McKinnon and it’s hard to escape the creeping sense that she’s not just different—she’s lucky. Memories that would be searing to anyone else leave little impression on her. Like the time in 1986 when the couple was living in Arizona and Green was jumped by a group of white men while out fishing. Once again, McKinnon knows the salient facts of the story, but the details and the painful associations all reside with Green. McKinnon also quickly forgets arguments, which might be the reason she and Green have stayed together so long, she jokes. More than a decade ago a woman named Jill Price came to the attention of scientists at UC Irvine. In contrast to McKinnon, who has received relatively little press attention, Price became an instant media sensation. Which is all just to say: When it comes to people with highly unusual memories, it’s not clear that we as a culture are so good at choosing who to envy. And yet the life-logging impulse is lost on McKinnon.

How to Keep Criticism From Sinking Your Confidence Walt Whitman circa 1854. Photo from the Library of Congress. “Re-examine all you have been told at school or church or in any book, dismiss whatever insults your own soul,” Walt Whitman (May 31, 1819–March 26, 1892) wrote in offering his timeless advice on living a vibrant and rewarding life in the preface to Leaves of Grass. When Whitman first published his masterpiece in 1855, it was met with indifference punctuated by bursts of harsh criticism. It is certainly easier, though never easy, to dismiss what insults one’s soul when it comes from critics who haven’t earned one’s confidence — “Take no notice of anyone you don’t respect,” Jeanette Winterson offered in her ten wise rules of writing. Whitman modeled this exquisitely in an encounter with Emerson himself. On a crisp February afternoon in 1860, five years after the publication of Leaves of Grass, the two men took a two-hour walk along Boston Common. One of Margaret C. During those two hours he was the talker and I the listener.

How Fish and Chips Migrated to Great Britain The powerful pairing of fish and chips has long been considered a British staple. Dubbed “the undisputed national dish of Great Britain” by the National Federation of Fish Friers, it’s been enjoyed on the island for over a century, with an estimated 35,000 chip shops in business by 1935. During World War II, Winston Churchill exempted the beloved dish from rationing. Today, “Fish & Chip Friday” is a weekly ritual for Brits ringing in the weekend. Fish and chips’s origin story, however, is a bit more complex than this nationalist sentiment might imply. As told by Simon Majumdar in his podcast, Eat My Globe, it all began outside of the U.K., hundreds of years ago. While many fled, some Jews stayed, and either converted to Christianity or pretended to do so while continuing to practice Judaism in secret. Peshkado frito (in Andalusian dialect, pescaíto frito) was one of them. It was a hit. But the Friday-night tradition was likely chipless until the late-19th century.

15 Obscure Words for Everyday Feelings and Emotions The word entrepreneur literally means “undertaker”—not in the funereal way, but in the sense of someone who “undertakes” a particular activity or task. In that literal sense, the word (spelled enterprenour) first appeared in English in the 15th century but seemingly failed to catch on. It wasn’t until the early 19th century that it was plucked from obscurity and began to be used specifically to refer to theatrical producers and patrons who funded and managed musical productions, before the more familiar sense of “someone who owns and runs their own business interests” emerged in the 1850s. 1. The earliest record of the word background dates from 1671, when it first appeared in a stage direction in William Wycherley’s Restoration comedy Love In A Wood (“Ranger retires to the background”) referring to the back of a stage. 2. 3. 4. 5. 6. 7. 8. 9. 10. This list first ran in 2016.

Haven’t We Seen Enough Mass Shootings? Instead of hoarding our photos for our print edition, as was then the norm, we decided to share everything as soon as we had it. The next day front pages around the world carried pictures from Rocky photographers. The staff’s pictures would go on to win the Pulitzer Prize for news photography, and its reporting would win other national awards. That was a small point of pride in an otherwise very dark time. It’s different covering a tragedy in your own community. I didn’t realize then how much the story would dominate our lives or for how long. At that time, I believed Ginsburg’s words. We committed ourselves to asking the questions the shooting raised. Adam Serwer: The most dangerous American idea We kept at it even as we heard from many readers asking us to stop. A list of mass shootings that could fill this entire article followed. I’m out of daily journalism now. This ritual can make journalism seem futile. Journalists feel the need to bear witness.

Why Do Canadians Say ‘Eh’? When I told friends in the Pennsylvania suburb where I grew up that I was going to college in Canada, their responses tended to come in two forms. One was about the weather; to a southern Pennsylvanian, any temperature below 25 degrees Fahrenheit is cause for panic. The other was a volley of linguistic stereotypes about the nation of Canada, involving either “aboot” or “eh.” Canadians are not particularly amused when you eagerly point out their “eh” habit, but the word has become emblematic of the country in a way that is now mostly out of their control. In response, some have embraced it, adopting it as an element of Canadian patriotism. “Eh” is what’s known as an invariant tag—something added on to the end of a sentence that’s the same every time it’s used. But “isn’t it” is a variant tag, because it will change based on the subject and tense of what came before it. There are a few major ways a Canadian could use “eh.” As a command, “eh” is singularly weird.

Oatmeal Is Still the World’s Best Performance Breakfast A bowl of oats is a blank canvas, ready to be paired with a truckload of other high-quality, nutritious ingredients. Photo by john shepherd/iStock. In a world of green juice and chia seed pudding, this age-old dish is the original, and perhaps most powerful, superfood, especially for athletes competing at the highest levels. “I’ve asked a lot of elite endurance athletes about their breakfast foods, particularly before races, and oatmeal comes up again and again and again,” says Matt Fitzgerald, endurance coach, nutritionist, and author of The Endurance Diet. You’re most likely to see oatmeal served with a ton of fixin’s, but even a bowl of plain oats holds its own as a nutritional panacea. But a bowl of oats is also a big blank canvas, ready to be combined with a truckload of other high-quality, nutritious ingredients that make it even better training food. Even energy bar companies use it. It’s easy to make. Gwen Jorgensen Triathlete Big Bowl o’ Oats Lucy Bartholomew Ultrarunner Mark Healey

Has Wine Gone Bad? Getty Images If you were lucky enough to dine at Noma, in Copenhagen, in 2011 – which had just been crowned as the “best restaurant in the world” – you might have been served one of its signature dishes: a single, raw, razor clam from the North Sea, in a foaming pool of aqueous parsley, topped with a dusting of horseradish snow. It was a technical and conceptual marvel intended to evoke the harsh Nordic coastline in winter. But almost more remarkable than the dish itself was the drink that accompanied it: a glass of cloudy, noticeably sour white wine from a virtually unknown vineyard in France’s Loire Valley, which was available at the time for about £8 a bottle. It was certainly an odd choice for a £300 menu. As natural wine has grown, it has made enemies. Once you know what to look for, natural wines are easy to spot: they tend to be smellier, cloudier, juicier, more acidic and generally truer to the actual taste of grape than traditional wines. Rigid boundaries soften over time.

Millennial loneliness poll: 22 percent say they have “no friends” Today, members of the millennial generation are ages 23 to 38. These ought to be prime years of careers taking off and starting families, before joints really begin to ache. Yet as a recent poll and some corresponding research indicate, there’s something missing for many in this generation: companionship. A recent poll from YouGov, a polling firm and market research company, found that 30 percent of millennials say they feel lonely. This is the highest percentage of all the generations surveyed. Furthermore, 22 percent of millennials in the poll said they had zero friends. In comparison, just 16 percent of Gen Xers and 9 percent of baby boomers say they have no friends. The poll, which looked at 1,254 adults 18 and up, did not report results for the up-and-coming Gen Z (who report high levels of loneliness on other surveys), or for the oldest adults in the country. Still, the findings on millennials are surprising. So there may be a cycle and it might not be new. And that’s important.