A Better Way to Practice 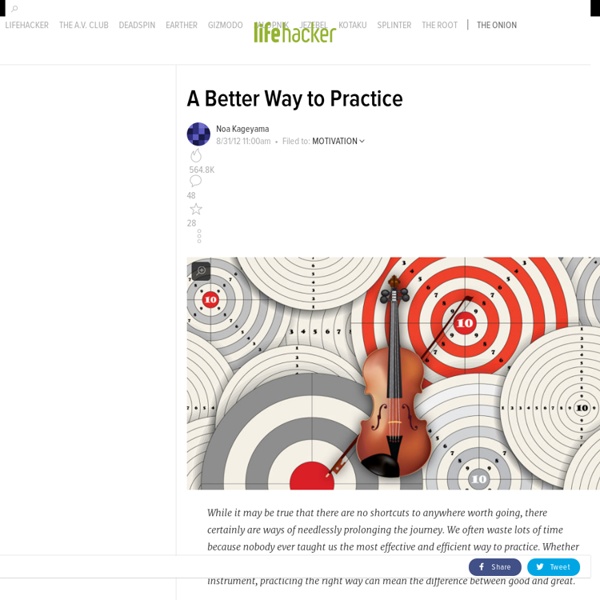 Why Highlighting is a Waste of Time: The Best and Worst Learning Technique In a world as fast-changing and full of information as our own, every one of us — from schoolchildren to college students to working adults — needs to know how to learn well. Yet evidence suggests that most of us don’t use the learning techniques that science has proved most effective. Worse, research finds that learning strategies we do commonly employ, like rereading and highlighting, are among the least effective. (MORE: How to Use Technology to Make You Smarter) The scientific literature evaluating these techniques stretches back decades and across thousands of articles. It’s far too extensive and complex for the average parent, teacher or employer to sift through. The WorstHighlighting and underlining led the authors’ list of ineffective learning strategies. The BestIn contrast to familiar practices like highlighting and rereading, the learning strategies with the most evidence to support them aren’t well known outside the psych lab.

Signs that you're a bad programmer - Software Engineering Tips Why was this written? Most of these faults were discovered the hard way by the author himself, either because he committed them himself or saw them in the work of others. This paper is not meant for grading programmers, it was intended to be read by programmers who trust their ability to judge when something is a sign of bad practice, and when it's a consequence of special circumstances. This paper was written to force its author to think, and published because he thinks you lot would probably get a kick out of it, too. 1. Inability to reason about code Reasoning about code means being able to follow the execution path ("running the program in your head") while knowing what the goal of the code is. Symptoms Remedies To get over this deficiency a programmer can practice by using the IDE's own debugger as an aide, if it has the ability to step through the code one line at a time. 2. Object Oriented Programming is an example of a language model, as is Functional or Declarative programming. 3. 4.

21 Brilliant Productivity Tools Every College Student Must Use If you ask a college student about productivity, he won't have much to say. And you really can't blame him. He leads a dynamic life where academics and fun go hand in hand, with the latter becoming a more important activity most of the times. However, with the advent of internet and web 2.0, a college student now has access to so many amazing tools that he could finish up his work as well as enjoy life to the fullest without the guilt. Research and Taking Notes 1.Questia Questia is an excellent online research tool which features a huge web based library of magazines, books, journals, papers, articles and much more. Although you need to pay about $19.95 per month for its membership, you could save on books and magazines you buy if you subscribe to it. 2.Free Book Notes Free Book Notes, as the name suggests is a collection of free book notes, summaries, study guides and similar material aggregated from the internet. 3.Wikipedia 4.Notely 5.Evernote 6.Google Docs 7. 8.Noodletools Communication

30 Best Room Pictures of the Week - June 02st to June 08th, 2012 1. I really love this pool 2. Kohler Waterfall Shower 3. 4. 5. 6. 7. 8. 9. 10. 11. 12. 13. 14. 15. 16. 17. 18. 19. 20. 21. 22. 1900 Inn on Montford in Asheville, North Carolina 23. 24. 25. 26. 27. 28. 29. 30. Mind Maps - Mind Mapping Training from MindTools A Powerful Approach to Note-Taking (Also known as Mind Mapping, Concept Mapping, Spray Diagrams, and Spider Diagrams) "Mind Map" is a trademark of the Buzan Organization (see www.buzan.com). Record ideas memorably with James Manktelow & Amy Carlson. Have you ever studied a subject or brainstormed an idea, only to find yourself with pages of information, but no clear view of how it fits together? This is where Mind Mapping can help you. Mind Mapping is a useful technique that helps you learn more effectively, improves the way that you record information, and supports and enhances creative problem solving. By using Mind Maps, you can quickly identify and understand the structure of a subject. More than this, Mind Maps help you remember information, as they hold it in a format that your mind finds easy to recall and quick to review. About Mind Maps Mind Maps were popularized by author and consultant, Tony Buzan. . Uses Mind Maps are useful for: Brainstorming – individually, and as a group. 1. 2.

Dead Sea Scrolls: The Boston exhibit lets visitors see one of the greatest treasures of the modern era A Bedouin goat herder was merely chasing after a stray when he stumbled into a cave and discovered one of the greatest treasure-finds of the modern era. The ancient manuscripts inscribed in Hebrew dialects that he discovered rolled inside clay pots became known as the Dead Sea Scrolls, currently the oldest existing biblical manuscripts since they date from between 150 B.C. and 70 C.E. Now one of the largest public displays of the Dead Sea Scrolls ever is the centerpiece of an exhibit at Boston’s Museum of Science titled “Dead Sea Scrolls: Life in Ancient Times.” “We are thrilled to bring this world treasure to Boston for the first time,” said Paul Fontaine, Museum of Science vice president of education. The Dead Sea Scrolls contain biblical text found in the Hebrew Bible, or Old Testament, in addition to other books not included in the canon such as the Book of Enoch, the Book of Jubilees, and the Testament of Levi. The majority of the scrolls are nonreligious, Dr. And they found one.

Concept Mapping Resource Guide General Reading. A good place to start learning about concept mapping is by doing some reading of the primary background articles. Here are some of the "classic" articles that are a good starting point: Web Page Introductions. There are two major websites that act as major resources on concept mapping: Concept Systems Incorporated This is, of course, the primary website and the only one from which you can download the software and obtain information about licensing and training. Presentations. Introduction to Concept Mapping Presentation in San Diego, January 13, 2005. Knowledge Base and Online Help. Tutorial. Training. Worksheets. Downloading. When you complete the form, the download page will be displayed. Installing. To install the program follow the usual software installation procedures.

Ancestral Lines Evolutionary biologists use a cladogram, the treelike diagram of evolutionary branches or clades, to organize species into lines of evolutionary descent across time. Biologists use three types of evidence to deduce evolutionary connections: genetics, morphology, and geologic dating. (Behavior, normally a key part of evolutionary studies, can only be inferred in extinct species — for example, by examining the ecology in which the species flourished and the species adaptations for eating and locomotion.) Analyses of primate fossils and the genetic relatedness of living primates converge to the conclusion that humans and chimpanzees branched from a common ancestor about 7 million years ago. The rest of the puzzle must be deduced from morphology (physical form, as reconstructed from the bones) and geologic dating. The cladogram for human evolution shown above currently lacks key pieces of evidence. These are some of the most interesting but currently unanswered questions about human descent:

IBM solar collector magnifies sun by 2,000x (without cooking itself), costs 3x less than similar systems Cleverly combining solar PV with solar thermal to reach 80% conversion efficiency Concentrating the sun's ray onto solar photovoltaic (PV) modules requires walking the fine line between optimizing power output and not literally melting your very expensive super-high-efficiency solar cells. A team led by IBM Research seems to have found a way to push back the line. Waste not The beauty is that this heat is not just thrown away. A single collector can produce about 25 kilowatts of electricity. In the video below, IBM research scientist Bruno Michel gives an overview of the project: Keeping costs low It's great to see that efforts have been made to kind costs low. "The design of the system is elegantly simple," said Andrea Pedretti , chief technology officer at Airlight Energy. They are targeting a cost below $250 per square meter, which would be three-times lower than comparable systems and bring "levelized cost of energy" to less than 10 cents per kilowatt hour (KWh).

Inside America's luxury bomb shelters: The underground homes which have enough space for pools, basketball courts... and even private jets By James Nye PUBLISHED: 19:53 GMT, 20 May 2013 | UPDATED: 21:24 GMT, 20 May 2013 It is the latest boom in real estate to sweep the nation complete with all the features of luxury living such as indoor pools, gyms, basketball courts and in some rare cases room for your private airplane. The only catch is that the property is buried deep underground in bomb shelters designed to escape the apocalypse. Once thought of as spartan concrete tombs where heads of state and concerned families could wait for the nuclear fall out to drop, bomb shelters have over the past 15-years become highly desirable - with developers rushing to offer custom installations. Scroll Down for Video Hi-tech underground survival shelters -are going through a boom since the panic over the Mayan calender and the purported end of the world last year Now, some developers create 100,000 square foot underground homes that could also potentially house families for year - in the unlikely event of a disaster. See more at Vivos.