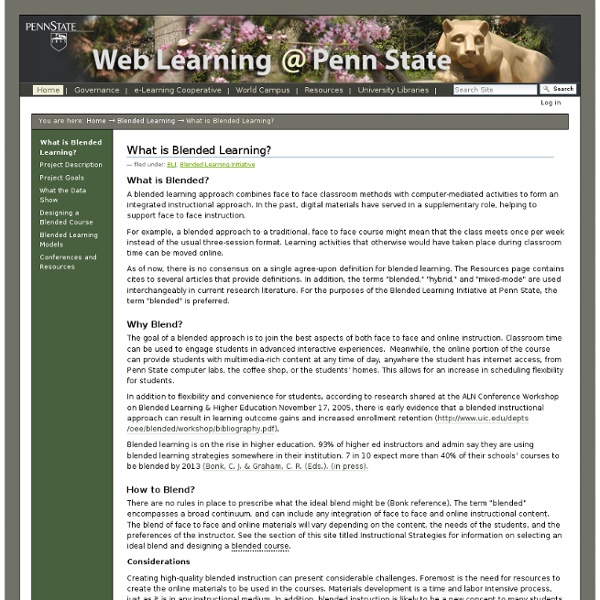 Teachers Guide to Blended Learning " A blended learning approach combines face to face classroom methods with computer-mediated activities to form an integrated instructional approach. In the past, digital materials have served in a supplementary role, helping to support face to face instruction.For example, a blended approach to a traditional, face to face course might mean that the class meets once per week instead of the usual three-session format. Learning activities that otherwise would have taken place during classroom time can be moved online...." I have chosen for you the above introducation from weblearning to set the floor for the infographic below which has some amazing data and facts about blended learning. read and share .Click to enlarge the image Browse more infographics.

Blended learning Blended learning is a formal education program in which a student learns at least in part through online delivery of content and instruction with some element of student control over time, place, path or pace.[1] While still attending a “brick-and-mortar” school structure, face-to-face classroom methods are combined with computer-mediated activities.[2] Proponents of blending learning cite the opportunity for data collection and customization of instruction and assessment as two major benefits of this approach.[3] Schools with blended learning models may also choose to reallocate resources to boost student achievement outcomes.[4] Terminology[edit] History of the term[edit] The concept of blended learning has been around for a long time, but its terminology was not firmly established until around the beginning of the 21st century. Word usage and context[edit] Blended Learning History[edit] Advantages/disadvantages[edit] Advantages[edit] Disadvantages[edit] Community[edit] See also[edit]

How 21st Century Thinking Is Just Different How 21st Century Thinking Is Just Different by Terry Heick This content is proudly sponsored by The Institute for the Habits of Mind, promoting the development of personal thinking habits in 21st century learners. In an era dominated by constant information and the desire to be social, should the tone of thinking for students be different? After all, this is the world of Google. As a result, the tone of thinking can end up uncertain or whimsical, timid or arrogant, sycophant or idolizing–and so, devoid of connections and interdependence. The nature of social media rests on identity as much as anything else—forcing subjectivity on everything through likes, retweets, shares, and pins. But this takes new habits. Information Abundance There is more information available to any student with a smartphone than an entire empire would have had access to three thousand years ago. New contexts—digital environments that function as humanity-in-your-pocket—demand new approaches and new habits. Persisting.

9 Characteristics Of 21st Century Learning The label of “21st Century learning” is vague, and is an idea that we here at TeachThought like to take a swing at as often as possible, including: –weighing the magic of technology with its incredible cost and complexity –underscoring the potential for well thought-out instructional design –considering the considerable potential of social media platforms against its apparent divergence from academic learning Some educators seek out the ideal of a 21st century learning environment constantly, while others prefer that we lose the phrase altogether, insisting that learning hasn’t changed, and good learning looks the same whether it’s the 12th or 21st century. At TeachThought, we tend towards the tech-infused model, but do spend time exploring the limits and challenges of technology, the impact of rapid technology change, and carefully considering important questions before diving in head-first. The size of the circles on the map are intended to convey priority. 1. 2. 3. 4. 5. 6. 7. 8. 9.

Virtual world The user accesses a computer-simulated world which presents perceptual stimuli to the user, who in turn can manipulate elements of the modeled world and thus experience a degree of telepresence.[6] Such modeled worlds and their rules may draw from the reality or fantasy worlds. Example rules are gravity, topography, locomotion, real-time actions, and communication. Communication between users can range from text, graphical icons, visual gesture, sound, and rarely, forms using touch, voice command, and balance senses. Virtual worlds are not limited to games but, depending on the degree of immediacy presented, can encompass computer conferencing and text based chatrooms. Sometimes, emoticons or 'smilies' are available to show feeling or facial expression. Emoticons often have a keyboard shortcut.[9] Edward Castronova is an economist who has argued that "synthetic worlds" is a better term for these cyberspaces, but this term has not been widely adopted. History[edit] Economy[edit]