Is the Rule of Thirds Really All That It's Cracked Up to Be? One of the first concepts you learn about when studying aesthetic theory is the rule of thirds, but is it really as beneficial to composition as you think? 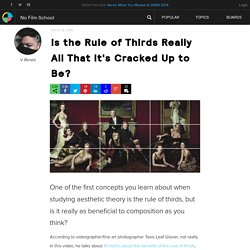 According to videographer/fine art photographer Tavis Leaf Glover, not really. 6 Tips for Perfect Composition in Portrait Photography - 50mm lens. Boudoir Photography - simple tips using natural light. Tony Zhou’s Videos on Vimeo. Here Are 129 Reminders of How Beautifully Powerful Cinematography Can Be. 9 Composition Techniques That Will Make Your Images Eye-Catching on a Biological Level. The composition of a shot can not only make it pleasing to the eye, but it can also speak volumes to your audience. 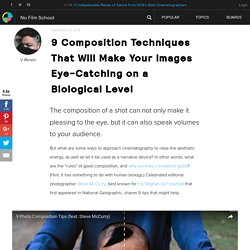 But what are some ways to approach cinematography to raise the aesthetic energy, as well as let it be used as a narrative device? In other words, what are the "rules" of good composition, and why are they considered good? (Hint: It has something to do with human biology.) Celebrated editorial photographer Steve McCurry, best known for his "Afghan Girl" portrait that first appeared in National Geographic, shares 9 tips that might help. How a Professional Cinematographer Breaks Down a Script.

Great cinematographers don't just show up on set, capture some images, and call it good. 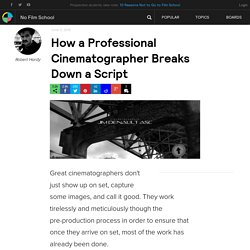 They work tirelessly and meticulously though the pre-production process in order to ensure that once they arrive on set, most of the work has already been done. While these processes are numerous and range from location scouting to building gear lists, one of the very first, and most critical, is breaking down the script. I've talked about script breakdowns for cinematographers in the past and outlined my own process. However, in an excellent little excerpt from his recent CreativeLive course about cinematography preparation, Jim Denault ASC shared his process for breaking down a script, and it's quite different from mine. This clip includes what he looks for both from an aesthetic point of view (i.e., sketching out how he wants these scenes to look and feel) as well as how to find technical and practical challenges that he and his team need to overcome. Kogonada on Vimeo. The First and Final Frames of Famous Films Can Teach Us a Lot about Good Filmmaking. A single frame is rarely more important than all of the others in a film, but the first and last can leave one hell of an impression. 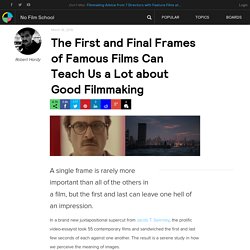 In a brand new juxtapositional supercut from Jacob T. Greatest Cinematographers of the World, Interviewed. A Peek Through the Venetian Blinds: What is Film Noir? There's more to film noir than venetian blinds, sexy dames, and hard-boiled detectives in fedoras. 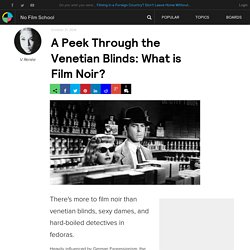 The Stylistic Elements of Film Noir, Explained In One Handy Infographic. Learn the 'Rules' of Film Noir & How to Light It. Genres come and go, but 70 years after its birth, the "rules" of film noir have become part and parcel of the conventions of modern cinema. 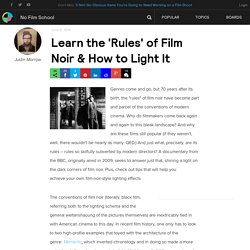 Why do filmmakers come back again and again to this bleak landscape? And why are these films still popular (if they weren't, well, there wouldn't be nearly as many. QED.) Explore the Cinematic Techniques Steven Spielberg Used in 'Raiders of the Lost Ark' Director Steven Soderbergh recently removed the color from Steven Spielberg's Raiders of the Lost Ark to explore the film's staging, and here to provide us with more educational treasures is editor Vashi from Vashi Visuals, who shared a number of his own videos that break down some of the techniques used by Spielberg. 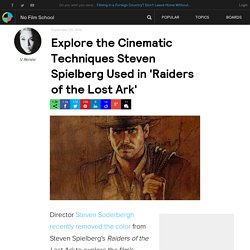 In this video, Vashi explores how Spielberg uses only 12 shots to effectively and interestingly introduce the audience to the film's hero, Indiana Jones -- without the use of dialog. We've all heard the unofficial golden rule of filmmaking "Show, don't tell" -- try not to use dialog and exposition to tell your story if you can use cinematography and visuals -- or at least as much as you can (not hating on dialog here). WATCHED. 5 Techniques That Create Depth & Make Your Cinematography More Dynamic. How do you create depth when you're working with a two-dimensional medium? 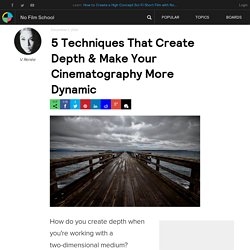 One of the first things you learn about when studying cinematography is composition, and one of the first things you learn about composition is basic aesthetic theory: symmetry vs. asymmetry, energy, color, weight, vertices, etc. Then, somewhere near the end of the class, the back of your text book, the final two minutes of the seminar, you hear about depth -- not because it's unimportant, but because creating it takes a little more finesse than centering your subject in the frame. The greatest cinematographers are known for (among other things) creating the illusion of depth by using a number of clever techniques and here to break down five of them in this 3-minute video is award-winning commercial cinematographer Matthew Rosen.

Here are the techniques Rosen explains in his video: High Contrast Lighting Focus Perspective Parallax Occlusion. If You Have 14 Minutes, You Have Time to Learn the Basics of Cinematic Composition. A cinematographer expresses his or her vision, and/or that of the director, through the art of composition -- the selection and arrangement of elements. 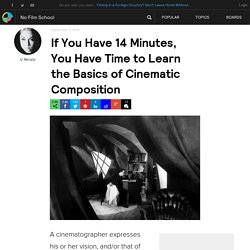 This video essay by Press Play not only compares the arrangement of early and contemporary films, but explains the fundamentals of what makes up a composition as well. In its early years, cinema was essentially as its etymology described it: written movement.