Even theories change. Accepted theories are the best explanations available so far for how the world works. 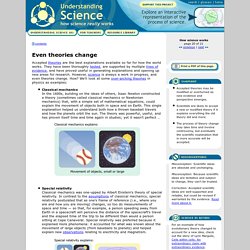 They have been thoroughly tested, are supported by multiple lines of evidence, and have proved useful in generating explanations and opening up new areas for research. However, science is always a work in progress, and even theories change. How? We'll look at some over-arching theories in physics as examples: Classical mechanicsIn the 1600s, building on the ideas of others, Isaac Newton constructed a theory (sometimes called classical mechanics or Newtonian mechanics) that, with a simple set of mathematical equations, could explain the movement of objects both in space and on Earth. This single explanation helped us understand both how a thrown baseball travels and how the planets orbit the sun. 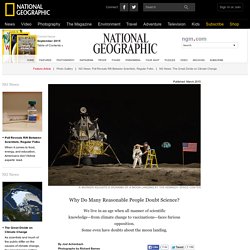 Strangelove in which Jack D. Ripper, an American general who’s gone rogue and ordered a nuclear attack on the Soviet Union, unspools his paranoid worldview—and the explanation for why he drinks “only distilled water, or rainwater, and only pure grain alcohol”—to Lionel Mandrake, a dizzy-with-anxiety group captain in the Royal Air Force.

Sci.not.pdf. Separating science from nonsense. PHYS103: Module 006. Evolution Lesson: PDF packets for The Great Fossil Find. These pages are in Adobe Acrobat PDF format in order to retain their intended layout for reliable downloading and printing. 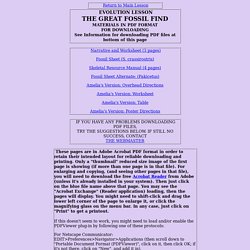 Only a "thumbnail" reduced size image of the first page is showing (if more than one page is in that file). For enlarging and copying, (and seeing other pages in that file), you will need to download the free Acrobat Reader from Adobe (unless it's already installed in your system). Then just click on the blue file name above that page. You may see the "Acrobat Exchange" (Reader application) loading, then the pages will display. You might need to shift-click and drag the lower left corner of the page to enlarge it, or click the magnifying glass on the menu bar. If this doesn't seem to work, you might need to load and/or enable the PDFViewer plug-in by following one of these protocols: For Netscape Navigator: OPTIONS>General Preferences>Helpers (scroll to check for PDF on list, add it if it isn't, then click OK to activate it. 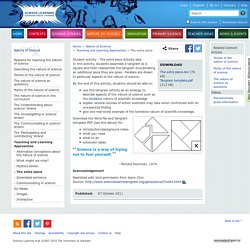 Nature of Science. To answer the question what is the nature of science? 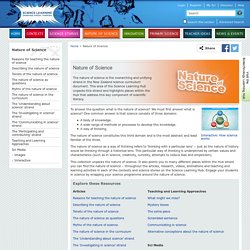 We must first answer what is science? One common answer is that science consists of three domains: A body of knowledge. A wide range of methods or processes to develop this knowledge. LP5-Nature%20of%20Science.pdf. Video : What is Science? Chapter 1: The Nature of Science. Chapter 1: THE NATURE OF SCIENCE Over the course of human history, people have developed many interconnected and validated ideas about the physical, biological, psychological, and social worlds. 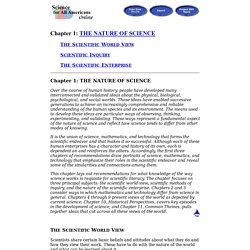 Those ideas have enabled successive generations to achieve an increasingly comprehensive and reliable understanding of the human species and its environment. The means used to develop these ideas are particular ways of observing, thinking, experimenting, and validating. Activity: Dogs and Turnips. Evolution: Videos for Students: Evolving Ideas. Here Be Dragons: Watch Now in HD. Science and Skepticism. Scientific skepticism - Mysteries and Science: Exploring Aliens, Ghosts, Monsters, the end of the world, and other weird things. Theory. Oddly enough, one of the most important aspects of science is also one of those most frequently misunderstood. 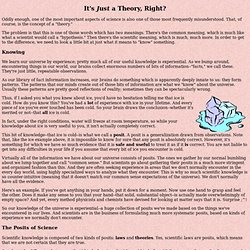 That, of course, is the concept of a "theory. " The problem is that this is one of those words which has two meanings. There's the common meaning, which is much like what a scientist would call a "hypothesis. " Then there's the scientific meaning, which is much, much more. 10 Characteristics of Scientists. Do you diligently watch Big Bang Theory reruns? 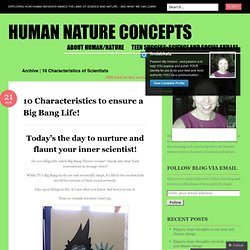 Sneak into Star Trek conventions in strange cities? While TV’s Big Bang nerds are cast as socially inept, it’s likely the coolest kids would be envious of their social network. Like most things in life, it’s not what you know but how you use it. Time to rethink scientist’s bad rep. Chemist from NYC Tech Day (google???) Characteristics of Science. NSTA Theories and Laws. Laws and Theories Among the Common People. I guess it’s fair to say that the scientific community has not done so well in constructing its jargon vocabulary. 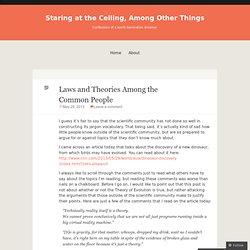 That being said, it’s actually kind of sad how little people know outside of the scientific community, but are so prepared to argue for or against topics that they don’t know much about. I came across an article today that talks about the discovery of a new dinosaur, from which birds may have evolved. You can read about it here: I always like to scroll through the comments just to read what others have to say about the topics I’m reading; but reading these comments was worse than nails on a chalkboard. Before I go on, I would like to point out that this post is not about whether or not the Theory of Evolution is true, but rather attacking the arguments that those outside of the scientific community make to justify their points.

“Technically reality itself is a theory. Study Unit : When Does a Theory Become a Law? This is something that comes up quite frequently in discussions between scientists and the general public. 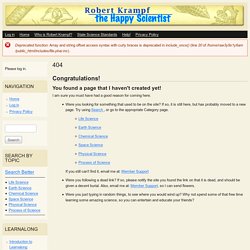 How much proof does it take for a theory to graduate to being a law? Theory Law Because the words theory and law have such different meanings in the language of science, it is often a difficult question to answer, so instead, I'll start by giving you a few similar questions to answer. Scientific Laws and Theories. SCIENTIFIC LAWS and THEORIES I've had a student ask me to clarify the difference between a scientific "law" and a "theory". Magic with Physics - Pendulum Stop.

What Science is/is not. Parts of an Experiment. Barbie Bungee. Get students' interest by asking, "Do you think the length of the cord and the size of the person matters when bungee jumping? STEM Lesson Ideas: Barbie Bungee Jump.