15 Breathtaking Astronomy Images Highlighting the Cosmic Beauty of Our Universe. Since 1995, Astronomy Picture of the Day (APOD) has been serving up daily doses of cosmic beauty through breathtaking photos of our fascinating universe. 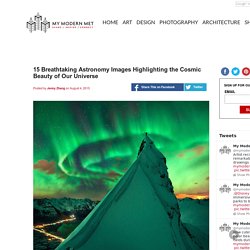 Maintained by Robert Nemiroff (MTU) and Jerry Bonnell (UMCP), two professional astronomers who met at NASA's Goddard Space Flight Center, the website contains the largest collection of annotated astronomical images on the internet. With content selected from NASA's archives as well as reader submissions, APOD illuminates the countless wonders of our world and outer space. Photographer Conquers Fear of Heights to Capture a Couple’s Stunning Yosemite Wedding. This past spring, photographer Brian Rueb captured his friends’ unforgettable wedding and overcame his fear of heights at the same time. 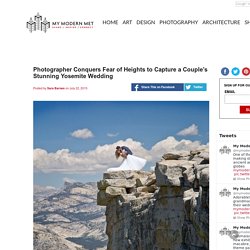 Endijs and Elina, the happy couple and avid outdoor enthusiasts, approached him about shooting their nuptials on the top of Half Dome in Yosemite National Park. Without knowing the specifics of the trek, Rueb quickly said yes. Afterwards, the photographer began to research what he had signed up for. The Half Dome, while worth the journey, was an 8.2 mile climb and 4,500 feet of elevation gain, with part of the trail only scalable via support cables. Feeling terrified, Rueb convinced Phillip Nicolas, his colleague and backcountry explorer, to record the wedding on video and offer him moral support. On the morning of the wedding, Rueb and Nicolas met the couple and their wedding officiant and set off on the grueling hike. Once Rueb approached the cables, whatever confidence he had previously felt began to waver. Massive 16th Century Sculpture of a Guardian Colossus. Shrouded within the park of Villa Demidoff (just north of Florence, Italy), there sits a gigantic 16th century sculpture known as Colosso dell'Appennino, or the Appennine Colossus. 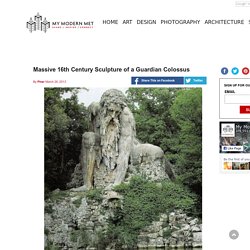 The brooding structure was first erected in 1580 by Italian sculptor Giambologna. Like a guardian of the pond in front of him, the giant is in an endless watchful pose, perched atop his earthy seat. At one point, the colossal figure stood amidst a number of other bronze statues, many of which have now gone lost or stolen. The massive brick and stone structure withstood centuries in the same spot, managing to maintain its figurative composition in all that time. 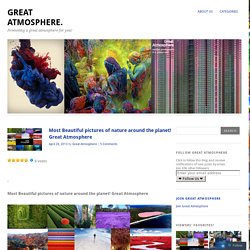 Great Atmosphere Our world is full of wonderful places and amazing places are discovered daily by professional or amateur photographers. Different geographical locations, climatic conditions, and even the seasons offer a wide variety of natural wonders: Pink lakes, stunning meadows, canyons and mountains are breathtaking, which you can hardly believe it’s true. Natural attractions of the world take you to distant lands and fairytale, but really there. Enjoy .. 1. 2. 3. 4. 5. Flickriver - A new way to view Flickr photos and more...

I55bp9q.jpg (JPEG Image, 990 × 742 pixels) Amazing Places. Exploring Culture - Searching Light. With an hour to spare before closing I decided to take in the exhibition at the Tacoma Glass Museum. 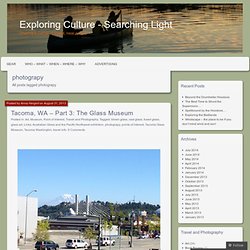 Mount Rainier was in full view – not a cloud in sight or threatening to cover the peak. The above sculpture (about 4′ high) was the first to capture my attention. I apologize for the glare – the iPhone has its limits… I love the interplay of translucency and color. Despite its weight this sculpture communicates movement and vitality to me. 60 insane cloud formations from around the world [PICs] Cloud varieties go way beyond the cumulus, stratus, and cirrus we learn about in elementary school. 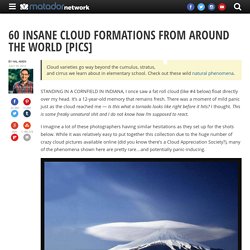 Check out these wild natural phenomena. STANDING IN A CORNFIELD IN INDIANA, I once saw a fat roll cloud (like #4 below) float directly over my head. It’s a 12-year-old memory that remains fresh. There was a moment of mild panic just as the cloud reached me — Is this what a tornado looks like right before it hits? I thought. I imagine a lot of these photographers having similar hesitations as they set up for the shots below. LakeSylvenstein_EN-US5970861221_1366x768.jpg (JPEG Image, 1366 × 768 pixels) - Aurora. Night Sky Panorama-Bonneville Salt Flats-3D Panorama - Aurora. 47 unearthly lightning strikes [PICs] Lightning photography can capture milliseconds of the most powerful natural phenomena. Just be sure you’re at least 6 miles (or 30 seconds between flash and thunder) from the storm. IN THESE IMAGES, lightning appears close up, often seemingly just a few city blocks away.

Don’t let the images fool you though — pro lightning photographers let the lenses do the work, or shoot from relative safety inside vehicles or under cover. As lightning strikes only last for an eyeblink, it’s also necessary to use long shutter times (up to 30 seconds or longer) or devices which can trigger the shutter when lightning is detected. Note then, that most of the images are not single instants in time, but composite images containing several individual lightning strikes over a given period. The most beautiful mushrooms in the world. National Geographic Adventures.

Wind your way from lodge to lodge through the luxuriant forests and snow-capped peaks of Peru’s stunning Cordillera Vilcabamba. Trek among glaciers and alpine lakes, as well as to local villages and lesser known Inca sites tucked into the slopes. Take in views of dazzling 20,000-footers such as Salkantay, the highest summit in the range and one of the most sacred peaks in Inca mythology. Yellowstone-falls.jpg (JPEG Image, 1046 × 1044 pixels) - Scaled (78%) Pyramids of Mesoamerica. Most Ancient Mesoamerican civilizations built pyramid-shaped structures. 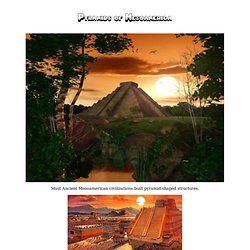 These were usually step pyramids, with temples on top more akin to the ziggurats of Mesopotamia than the Pyramids of Ancient Egypt. Mesoamerican Pyramids served many functions from - from astronomical observatories to places of ritual worship and sacrifice, and perhaps something linked to extraterrestrials. Mesoamerican Civilizations The Great Pyramid of Cholula The temple-pyramid complex was built in four stages, starting from the 3rd century BCE through the 9th century CE, and was dedicated to the deity Quetzalcoatl.

Today the pyramid at first appears to be a natural hill surmounted by a church. Because of the historic and religious significance of the church, which is a designated colonial monument, the pyramid as a whole has not been excavated and restored, as have the smaller but better-known pyramids at Teotihuacan. Corner Brook. Stunning Rural Landscapes Blur Reality with Abstraction. In these dramatic landscapes, photographer Lisa Wood perfectly blurs the line between reality and abstraction. 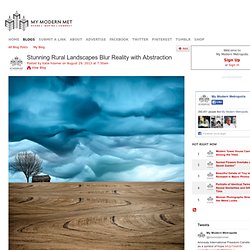 The series, entitled Art of Farmland, documents the gorgeous countryside of the artist's hometown in Sun Valley, Idaho. However, as viewers gaze upon the visually stunning images, it becomes evident that these aren't your typical farmland scenes. By blending multiple exposures and utilizing timelapse techniques, Wood transforms an everyday moment into a playfully surreal adventure. The artist merges geometric lines and patterns with bold, vibrant colors to create the painterly compositions. She says, "My hope for the viewer is to look at rural landscapes in a different way and to hopefully appreciate both the imagination behind the images and the moods they evoke. " Lisa Wood on Behance. National Geographic Adventures. 542598.jpg (JPEG Image, 1200 × 827 pixels) 542737.jpg (JPEG Image, 900 × 596 pixels) 542745.jpg (JPEG Image, 900 × 658 pixels) 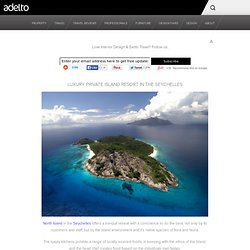 The luxury kitchens provide a range of locally sourced foods, in keeping with the ethos of the Island, and the head chef creates food based on the individuals own tastes. The rooms are designed to perfection and the luxury furniture and interior design creates a tranquil environment in which to sleep and relax. Part of the luxury retreats on offer by Wilderness Safaris, North Island was created as a conservation project, with the 11 unique luxury lodges using material reaped from the island during the rehabilitation process, creating a location which is ultimately private, secure and offers a unique holiday destination and experience for all of its guests. 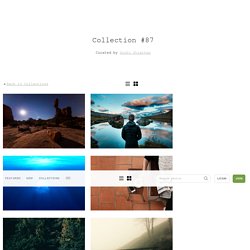 Awe-Inspiring Photos of Swirling Superstorms Belie Their Destructive Power. Supercell thunderstorms are characterized by a cycling, cylindrical vortex of air that moves upward off the ground, which is also known as a mesocyclone. Not only does it sound badass, but it produces some of the most visually striking weather on Earth. Each summer since 2009, photographer Mitch Dobrowner and guide Roger Hill have driven through the Great Plains and high deserts of the United States in search of these jaw-dropping forces of nature. When they find them, Dobrowner pulls out his camera and takes breathtaking black and white photos that capture the enormity and intensity of these churning atmospheric formations.

“On just the second day I was chasing storms I found myself standing there and I was like, ‘Holy shit, you have to be kidding me,’” Dobrowner says. “I had never seen anything like it.” In 2003, a charter snorkeling cruise off the coast of Mexico came across an unexpected body of a woman who went missing earlier that week. Her husband had pushed her from the boat. Photo was found in divers collection on flickr recently and quickly remove. Untitled. Untitled. 331686.jpg (JPEG Image, 792 × 594 pixels) 553920.jpg (JPEG Image, 1440 × 960 pixels) - Scaled (88. Фото и рисунки, арт и креативная реклама. The 22 Most Beautifully Secluded Places In The World. These amazing nature places are secluded from the whole world.

If you would love to visit some strange and amazing places this summer, than you can try one of these. All of them are something that you will remeber for the rest of your life. 1. 75 Stunning Photos That Made You Appreciate Earth In 2013. Ulua Beach, Maui Photo source: imgur / Photographer: Unknown. If you know the photographer please contact us so we can credit. Seychelles. 3003407.jpg (JPEG Image, 1000 × 667 pixels) 31 Places Everyone Should See Before They Die. Do you feel like making the most of your life? If the answer is Yes, then you should probably see every place on this list a Reddit user compiled. It contains almost every awesome place worth seeing around the globe. 5.jpg (JPEG Image, 1170 × 780 pixels) Drone Discovers Stunning Glacier Scene Hidden in the Himalayas. 799px-Saturn_north_polar_vortex_false_color.jpg (JPEG Image, 799 × 600 pixels) Welcome to Fotothing - Photo Blogging - Photo Sharing.